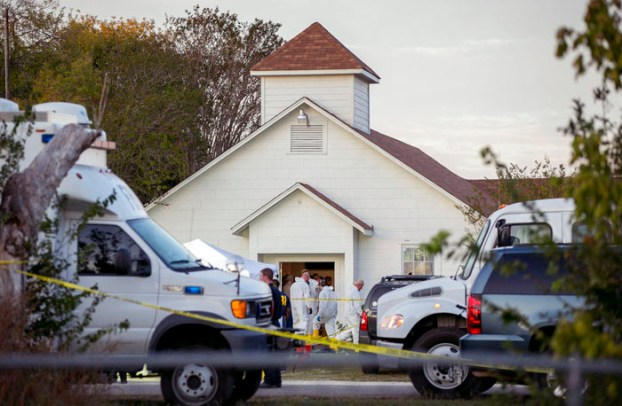 Investigators work at the scene of a deadly shooting at the First Baptist Church in Sutherland Springs, Texas, Sunday Nov. 5, 2017. A man opened fire inside of the church in the small South Texas community on Sunday, killing more than 20 people. (Jay Janner/Austin American-Statesman via AP)

Letter: Innocent lives lost in US should prompt action, too

In April 2017, after a gas attack  on the Syrian people by their own government,  the U.S. president sincerely said that the “attack had a big impact on me.”  He reacted by bombing a Syrian airbase in retaliation for the death of the “little babies,” “those innocent babies.”

When a shooting at a church in the U.S. kills 27 people, half of those children, the president of the U.S. dismisses the shooter as having a mental health problem and lets the matter rest.

If he really cared about the deaths of children, why would he refuse to even attempt to change the situation in this country? But he and many of the elected government officials are beholden to the NRA. The NRA helped get these people elected, and they are dependent on NRA support to stay in office.

This president could redeem himself by dealing with this longstanding issue without regard for the NRA, but he and others are afraid to do that. There may not be a perfect solution but we need to at least try to address this growing American tragedy for the good of the country. The problem is not going to solve itself.

Darts & laurels: Are we so powerless?

Dart to the crimes that have come to be identified as a largely American phenomenon — mass shootings. Whether the... read more