Editorial: Salisbury gets a new start 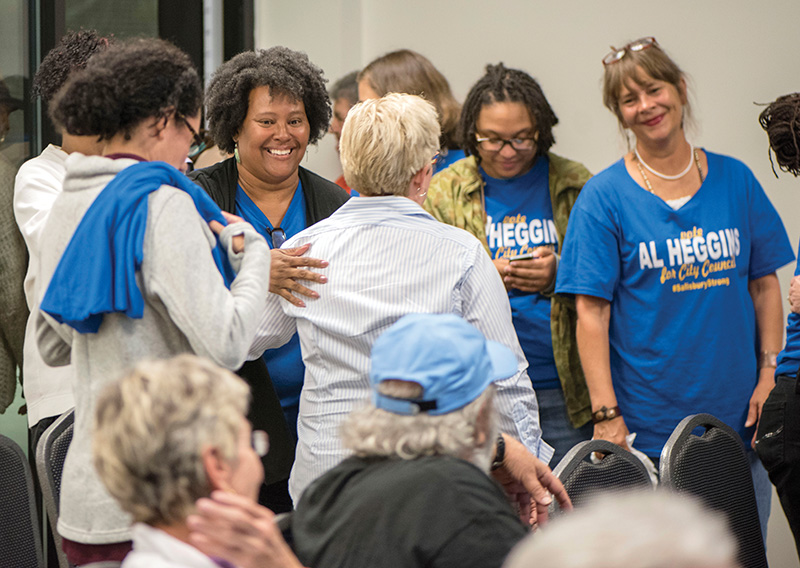 Salisbury City Council top vote-getter Al Heggins (center) is all smiles after arriving at the Board of Elections. JON C. LAKEY / SALISBURY POST

Salisbury could soon have its first black female mayor, if vote tallies hold and City Council sticks with tradition. In her first bid for City Council, Al Heggins held a well-organized campaign with countless events. She also demonstrated an ability to pull people together.  That’s leadership, and that quality helped make her the city’s top vote-getter. The council almost always chooses that person as mayor, and there’s no reason to expect otherwise this time.

Just 12 votes behind Heggins was David Post, running for his second term and a chance to complete the job of finding a viable future for the city’s broadband system. Post is not a one-issue candidate, but he understands Fibrant’s financial situation better than any other council member or candidate, and it’s not surprising that he would have a strong showing in the election. He came very close to becoming mayor. How does mayor pro tem sound?

In 2013 when Post and Kenny Hardin won seats, the council was undergoing a changing of the guard. Then-Mayor Paul Woodson and Pete Kennedy were not seeking re-election, and 16 people ran for the council. “New energy for Salisbury,” read an editorial headline in the Post the day after the election. Post and Hardin were indeed new and fresh, but Hardin brought to the job a confrontational style that hindered his effectiveness, and he did not win re-election.

Coming in third, Mayor Karen Alexander now faces the situation former Mayor Susan Kluttz experienced several years ago when Kluttz lost the top vote-getter slot and went back to being a council member. Alexander is devoted to the city and deeply involved in many initiatives. Her time might be better spent continuing on those projects than representing the city at each and every public event.

Tamara Sheffield won a seat for the first time, a testament to her perseverance after losing in 2015 and continuing to advocate for the city. Brian Miller, often a voice of calm and reason on the council, won re-election in the fifth slot.

Several more strong candidates threw their energy into this race, and Salisbury would benefit greatly if they stayed involved in municipal affairs. The city needs a bigger council, a ward system and a separate mayor’s race. That’s a subject for another day, but that day is getting closer and closer.  Congratulations to all for a lively and respectful campaign season. Salisbury was the winner.