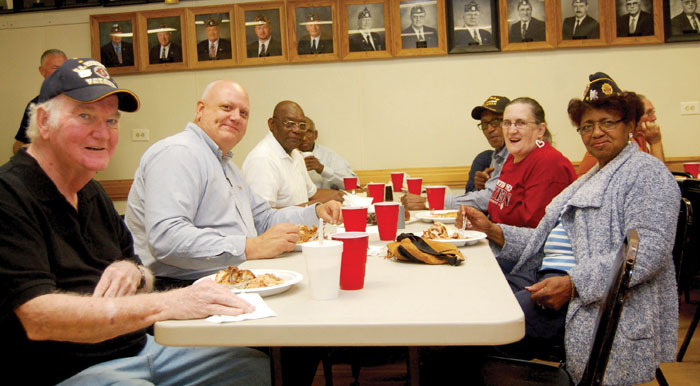 “If soldiers didn’t do what they did, then we wouldn’t have the freedoms we have,” Auten said. “A meal isn’t nearly as much as these men and women deserve, but we are happy to do what we can.”

“Powles Staton does a lot of work with veterans,” Roakes said. “Last year, we were approached by Kevin and John to host a lunch for veterans in the week leading up to Veterans Day, and we happily agreed.”

The lunch included pulled barbecue, chicken halves, baked beans, slaw and buns. In addition to the meal, numerous desserts were donated by people in the community including multiple kinds of cake, strawberry and banana pudding, and cookies.

An annual lunch may seem like a small thing, but the veterans are thankful to receive appreciation.

“Coming home from Vietnam, we were told not to wear our uniforms or else we’d risk being spit on and degraded,” said David Hand. “We weren’t welcomed home or appreciated. Now, we can feel proud since people recognize and appreciate our sacrifices.”

Receiving overdue appreciation is nice, but according to attending veterans, the best part of the lunch was the opportunity to spend time with other veterans.

“Veterans aren’t strangers because we all did the same thing,” said veteran William Moore. “Once you’ve worn the uniform, there is lots to talk about.”

The president of the Veterans Council of Rowan County, retired Master Sgt. Dean Moore, said, “Gatherings are great because it gives veterans a chance to talk with one another. No one can understand the struggle of veterans better than veterans, so it’s important for us to come together to talk and spend time together.”

Veterans were not only being appreciated for their military service at the lunch. The Sheriff’s Department expressed appreciation for the Sons of American Legion Post 342’s donation of stuffed animals for children in crisis situations within Rowan County.