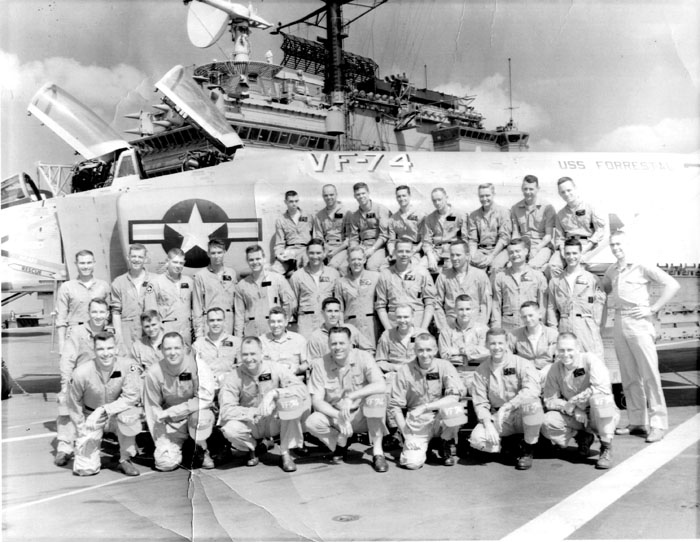 Submitted photo Members of Fighter Squadron 74 (VF-74) pose for this photograph on the deck of the USS Forrestal in 1967 during its deployment to Vietnam. Jere Rivers is the first person at left in the second row. Lorie Moore, Ott Pinkston and Meade Fowkles are 5,6 and 7 in the same row, and Jack Harris is fourth from the left in the back row.

SALISBURY — Ott Pinkston and four of his Navy fighter squadron buddies from the Vietnam War have remained friends over the years, and they all gathered at Ott’s house in October.

Among other things, the men and their wives took in OctoberTour.

“I would like to tell you how they were welcomed by Salisbury people,” says Ott’s wife, Julie. “Every party from the Patrons’ Party to visits to homes on tour, the Patrons’ Porch, the Transportation Museum, Bank Street — people gravitated to our group.

“All were so Southern and genuine in greetings to our friends. We were so proud of our community, and although most of these guys were born Southern, they were blown away by the hospitality shown them.”

During their weekend of reminiscing in Salisbury, the men re-enacted a picture similar to one taken of them in the spring of 1968 in Tampa, Fla., when they were attending the opening preseason baseball game between the New York Mets and St. Louis Cardinals.

It turned out to be quite a spring training visit. With Julie Pinkston taking the notes, this is what they remember.

First of all, the men were part of Fighter Squadron 74 (VF-74), nicknamed the Be-Devilers. They had already seen combat action the year before on the USS Forrestal’s deployment to Vietnam.

They were guests in Tampa of Moore’s father, Al Moore, a public relations man for Rheingold Beer, which did business with the Mets and New York Jets.

Some background first: The men from the fighter squadron had been practicing bombing runs in Fallon, Nevada, where there is a Naval air station and training airfield. But the runs had been canceled after a mid-air crash.

Their skipper told the pilots they could take their jets anywhere in the United States before reporting back to the Forrestal at Oceana, Virginia.

So the men accepted Al Moore’s invitation to spring training in Tampa, and they were set up in rooms at the Port-of-Call Hotel, where the Mets were staying.

The fighter squadron friends were treated royally and met, among others, Mets broadcaster Lindsey Nelson, Ralph Kiner, Bob Murphy, Casey Stengel, Yogi Berra, Stan Musial, Auggie Busch and Bob Gibson. (Gibson was the star of the 1967 World Series when the Cardinals won it all.)

It was Rivers who, after thanking Nelson for all the hospitality, volunteered himself and the other guys to give the Al Lang Field crowd at the preseason game a flyover. The Be-Devilers received the necessary permission from the Coast Guard Air Station south of the ballpark.

According to Julie Pinkston’s notes, the men made their flyover, starting a pull-up at about 200 feet and at a speed of 400 knots as they reached the outfield fence. They then hit the after-burners and did victory rolls up to 18,000 feet.

Their roaring flyover blocked out all communications for 19 seconds, and the crowd gave the aviators a standing ovation. But one person, Mets pitcher Tug McGraw (country singer Tim McGraw’s father), was not so happy.

As the flyover occurred, McGraw was standing on the mound and concentrating on his next pitch when “the Navy noise caused him to have an accident!” Julie Pinkston says. McGraw apparently never spoke to Lorie Moore again. Submitted photo These Vietnam War friends had a reunion recently in Salisbury. They put themselves in the same order as a photograph taken at a spring training game in 1968, and they include, from left, Lorie Moore, now of Georgia, Jack Harris of Florida and California, Jere Rivers, now of Georgia, Ott Pinkston of Salisbury and Meade Fowlkes of Virginia.

The Pinkstons provided three photographs to the Post. One is a 1967 photograph of the USS Forrestal with Fighter Squadron 74 pictured on board. Commissioned as the first “supercarrier” in 1955, the Forrestal sailed mostly in the Mediterranean Sea until its deployment to Vietnam in 1967.

That first trip to Vietnam turned tragic on July 29, 1967, when there was an ordnance explosion on the flight deck, leading to a massive fire. Pinkston, Moore, Harris, Rivers and Fowlkes were on board and survived, but 42 other men in Fighter Squadron 74 did not. The squadron also lost three F-4 jets.

In all, 134 men died from the explosion and fire.

At the time, the Forrestal was engaged in combat operations in the Gulf of Tonkin. One of the survivors of the fire was future U.S. Sen. John McCain. The carrier continued in service in years to come, but it suffered millions of dollars in damage from that July 1967 fire in Vietnam.

“I could not be prouder than to have been a Navy wife,” Julie Pinkston said. “Ott and these guys were lucky, unlike a number from our community who died in Vietnam.”

Pinkston added that the men who had their reunion in Salisbury were proud Americans in serving and prouder veterans today. Veterans Day is Saturday.