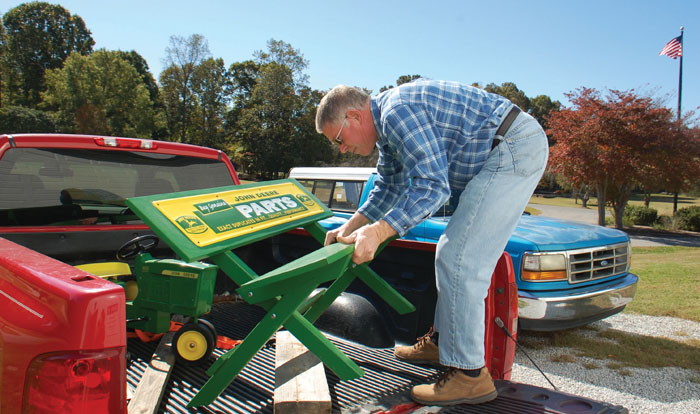 Mark Wineka/Salisbury Post Randy Elium unloads a couple of the items that will be sold during a live auction Nov. 4 at the Country Life Museum building under development at Sloan Park.

MILLBRIDGE — The Carolina Antique Power Association is a small, but mighty group.

The members have raised well over $150,000 toward their dream of a Country Life Museum at Sloan Park, and their efforts continue this coming Saturday with a garage sale, live auction, music, food and a drawing for big prizes.

Here’s the schedule for Saturday (Nov. 4) at the Country Life Museum building, located near the entrance to Sloan Park, 550 Sloan Road.

Debbie Suggs Catering is providing the food, which will include chicken and dumplings, pinto beans, slaw, a roll, drink and dessert for $8. Carry-out also will be available.

The raffle drawing at the end of the event will include a first prize of a John Deere 25-gun safe with e-lock and 60-minute fire protection.

The second prize is a Weatherby 12-gauge, 28-inch shotgun; third prize, a John Deere 4020 pedal tractor with a trailer.

Raffle tickets are $5 each or $20 for five tickets.

All the different events Saturday will be held inside the large, 4,800-square-foot building that will become the Country Life Museum. Randy Elium, president of the Carolina Antique Power Association, said he hopes the museum can be open for school tours by next spring.

Elium said CAPA owes only $13,000 more for the building, which over the past year has been heavily insulated and further prepared for exhibits.

Hundreds of items have been contributed for the garage sale and live auction, handled by Glenn Hester, who is donating his time.

“We really hope people will find treasures they can’t live without,” Elium says. “…We’re trying to raise money, and we’re not holding back.”

Other auction items of note are an antique Pepsi cooler, a table saw, patio furniture, a new grill, an antique chest of drawers with mirror, shelving and pots, many International wrenches, bar stools, a soap display desk that’s more than 100 years old, Harley-Davidson parts catalogs and some milk bottles from the Rowan Dairy.

“This ought to get somebody’s attention,” Elium says, walking past many of the items.

The separate garage sale will include all kinds of items — from old bicycles to new ball caps, from used televisions to new door knockers and billfolds. Other items include bargain clothing, shelving, bed furniture, coffee mugs, clocks, toys, grilling tools, baskets, books and even a pallet of deer corn.

“It ought to be a really good event,” Elium said.

CAPA, which has non-profit status, was officially incorporated in April 1993, when the idea of establishing a Country Life Museum started to percolate. CAPA approached the Rowan County Board of Commissioners with the idea in 2004.

The group’s mission statement for the Country Life Museum says its purpose will be “to preserve, restore and demonstrate various aspects of the country life of the past.”

The statement continues: “The vision is to use exhibits to educate both present and future generations on the rural way of life of the American farm family.”

The Country Life Museum will rely on a growing collection of donated farm and country life items. Elium says CAPA hopes to keep the museum fresh with rotating exhibits in and out and having the ability to accept artifacts as gifts or loans.

Much of the work behind construction of the museum building has been donated. Elium says 2,600 feet of vertical board will be coming soon, and those boards were fashioned from donated logs.

When the museum is up and running, CAPA will provide the volunteers to operate it. It also is responsible for all the building costs.

The association has a memorandum of understanding with Rowan County that says when the museum structure is complete and paid for, it becomes the property of the county and its Parks and Recreation Department.

While it will be located in Rowan County, the museum also hopes to serve and draw visitors from neighboring counties such as Iredell, Davie, Davidson, Cabarrus, Stanly and Mecklenburg.

Holiday 2017 issue of Salisbury the Magazine is now…