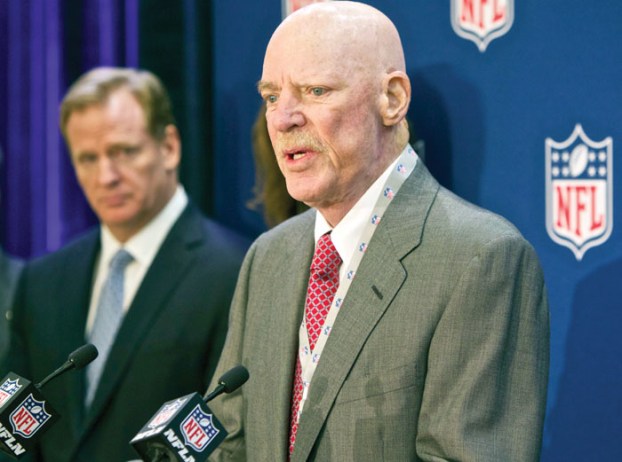 FILE -In this Dec. 10, 2014 file photo Houston Texans owner Bob McNair speaks at an NFL press conference during an owners meeting, in Irving, Texas. At left is NFL commissioner Roger Goodell. McNair has apologized after a report said he declared “we can't have the inmates running the prison” during a meeting of NFL owners over what to do about players who kneel in protest during the national anthem. (AP Photo/Brandon Wade, File)

HOUSTON (AP) — Bob McNair, the chairman and chief executive of the Houston Texans, apologized Friday after a report said he declared “we can’t have the inmates running the prison” during a meeting of NFL owners over what to do about players who kneel in protest during the national anthem.

McNair said he regretted using the expression and that he was “not referring to our players.”

“I used a figure of speech that was never intended to be taken literally,” McNair said. “I would never characterize our players or our league that way and I apologize to anyone who was offended by it.”

Coach Bill O’Brien was asked about the situation, but wouldn’t get into specifics about it as his team prepared for a game against the Seahawks.

The comment was published in an ESPN The Magazine story about two recent days of meetings among owners, players and others to discuss the protests that have drawn the ire of President Donald Trump. Players, following the lead of former NFL quarterback Colin Kaepernick, say they kneel to protest social injustices, particularly against African-Americans. Trump has sharply criticized the protests and even called on NFL owners to fire players.

The meetings earlier this month did not result in a policy change that would require players to stand for the anthem.

Brown is the only Texan who has participated in the anthem protests, raising his fist at the end of the anthem at a game in New England last season.  Brown, who returned to the team this week after holding out the first six games because of contract issues, hasn’t done that since then.

Brown said he thought about walking out of the building when he first learned of the comments but decided not to. He added that the situation is not over and that they’ll talk about it more as a team.

Receiver DeAndre Hopkins did not attend practice on Friday amid reports that he left because of the comment. O’Brien said he took a personal day.