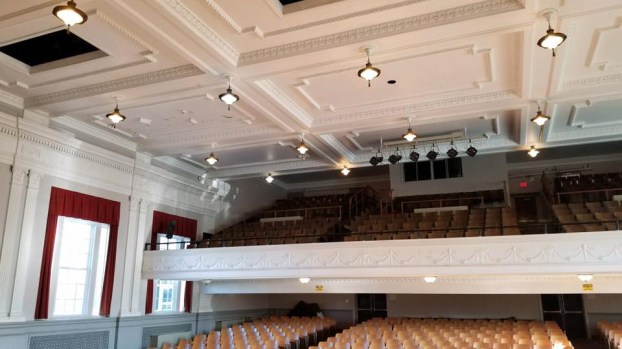 This picture, taken from the stage of Salisbury High School's auditorium, was shared on Facebook by Principal Luke Brown when he announced Stanback's gift. Submitted photo SALISBURY — The Salisbury High School auditorium is getting a new look after a private donation to cover much-needed renovation costs.

Principal Luke Brown said the $672,000 donation came from Fred Stanback after the local philanthropist and conservationist toured the school as part of a group. The group visited the school to see its new advanced manufacturing lab, but a Salisbury High graduate in the group asked to see the auditorium.

Brown said the auditorium has been in need of renovations for a while. It needs new seating and repairs to plaster on the walls and ceiling. As the group stood in the auditorium reminiscing about the school’s heyday as Boyden High School and talking about needed repairs, Brown said he was asked how much a full renovation would cost.

And that, he thought, was the end of the conversation. Until he got a phone call the next morning from the Rowan-Salisbury Schools director of construction, who asked him about potential renovations to the auditorium.

Brown and others determined that to “completely, 100 percent renovate the space” would cost roughly $672,000.

“And the next thing you know, we got an email saying that if work could begin immediately, (Stanback) could fund the project,” Brown said.

The auditorium, built in 1925, is listed as a national historical site. While it may need a facelift, Brown said, the historical character of the building will remain unchanged.

Plans are to replace seating, put in new aisle carpet, add a coating to bare concrete floors, repair plaster on the walls and ceiling, replace the stage curtain, refinish the stage floor, and replace light, sound and other media equipment.

Brown said Stanback is known for being a giving member of the community.

“It didn’t surprise me that he wanted to give; it surprised me the amount,” Brown said.

But he said he’s grateful for the opportunity.

“In a time where state and local budgets are crunched as tight as they can be, we knew it was a long shot of us to take a swing at the renovations that needed to be done 100 percent,” Brown said. “… It’s amazing that someone in the community would step up to donate the funds to get it all done.”

The auditorium, which used to play host to school plays, awards ceremonies and community functions, has been mostly out of commission for Brown’s four years as principal.

“We just didn’t feel like we could facilitate that with the things in the order that they were,” he said.

Brown said he hopes that when repairs wrap up in the spring, Salisbury High can “invite all those people back to the table.”

And the project itself should have a positive impact on students — even before it’s completed.

“It’s a morale boost for our students to see the investment that’s going into this school,” Brown said.

Work is expected to begin this week.

SALISBURY — A Salisbury man struck his 9-year-old daughter on the head with a broom because she didn’t want to exercise... read more