College Football: Catawba’s Zach Mayo has heard it before 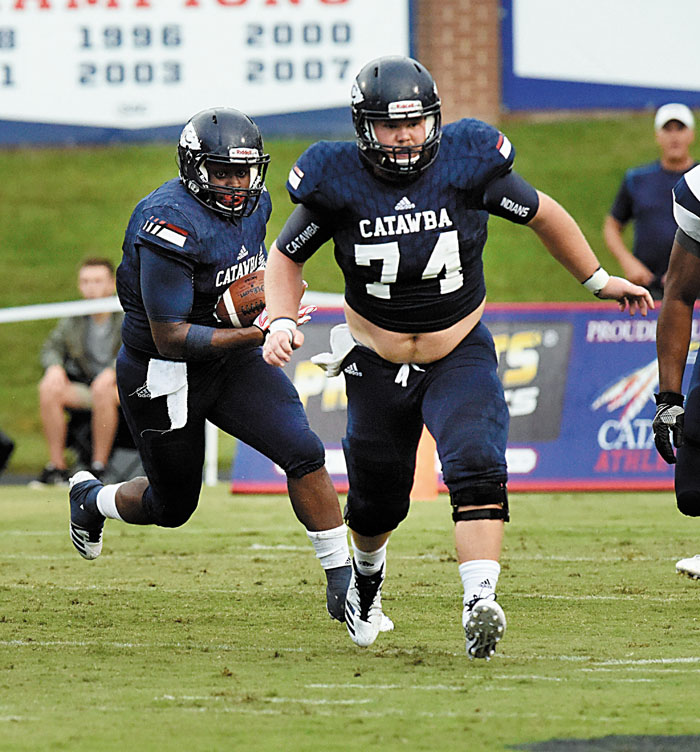 Wayne Hinshaw/for the Salisbury Post ... Catawba offensive lineman Zach Mayo (74) leads the way for ball carrier Eamon Smart (8), during a game earlier this season. A Mount Pleasant High School graduate, Mayo is a red-shirt freshman who starts at center for the Indians.

SALISBURY — Catawba’s Zach Mayo knows about the movie, even though it was on silver screens 35 years ago. Once in a while someone asks him if he was named after a fictional character.

“An Officer and a Gentleman” was one of the iconic movies of the early 1980s, with Richard Gere cast in the lead role of naval aviator in training Zachary “Zack” Mayo.  Louis Gossett Jr., who could scowl and growl with the best back in the day, played the part of Marine gunnery sergeant Emil Foley.  Foley yelled at Mayo  whenever he screwed up, which was often. Actually, he yelled at him a lot like a football coach.

“I’ve been asked a few times about that, and, yes, I’m very aware of the movie,” Mayo said. “But the name is just a coincidence.”

While Mayo, who is from Mount Pleasant High, is a gentleman off the field, he’s fierce on it. Even though he’s only a redshirt freshman, he’s listed as the starting center for the Indians. Mayo (6-2, 280) and sophomore Kevin Norton (6-1, 280) share that pivotal job on Saturdays and split practice reps during the week. The one that’s in the game makes all the calls for the offensive line.

Mayo has never entertained thoughts of flying fighter jets. He knew he wanted to be a football player about the same time he started walking. Legend has it that Mayo was carrying dumbbells around the house when he was  still in diapers. “Bam-Bam,” they called him, referencing the amazingly powerful toddler from “The Flintstones.”

He always was bigger and stronger and the other kids. It became abundantly clear as soon as he started dominating youth football games that he had a future in the sport.

“My step-dad (Scott Burleson) is like my dad, and he got me started in football,” Mayo said. “He was a coach at Mount Pleasant, and I can remember being in the locker room every day growing up. By the time I was 5 years old, I was watching the football team practice.”

Mayo served as a ball boy for the Mount Pleasant High Tigers on Friday nights from grade school through middle school and became like a son to long-time Mount Pleasant coach Michael Johns, who has sent a lot of players to Catawba.

By the time he was a freshman, Mayo was starting for the varsity Tigers. As a sophomore, he was all-conference.

By the time he was a junior, Mount Pleasant fielded a terrific team for a 2A rural school, with 3,000-yard back Cody Reece running wild and Mayo and  6-6, 320-pound senior Austin Moore controlling the line of scrimmage. On a frosty night in November, Mount Pleasant hosted North Rowan in a second-round playoff game that would change the future for Mayo.

“I remember how fast that North Rowan running back (JaReke Chambers) was,” Mayo said. “But we played a great game.”

Mount Pleasant shocked everyone, not just by winning, but by pulverizing talented North Rowan, 42-14. Mayo dominated. He made an impression not only on Brian Hinson, who was Catawba’s offensive line coach then, but Joe Nixon, the former Catawba lineman, who was North Rowan’s head coach.  Mayo jumped near the top of Catawba’s recruiting list.

Catawba watched Mayo perform the rest of that season, then followed him during his senior year as well. Both years Mount Pleasant kept advancing in the playoffs until it encountered Shelby — in the fourth round in 2014 and in the third round in 2015. If you play long enough in 2A, you eventually run into Shelby.

Mayo drew recruiting contacts from a lot of colleges, including Division I schools, but the Division I schools never offered. They were looking for 6-foot-5 linemen. Mayo is 6-2. So Catawba landed a guy who was bench-pressing 315 pounds, squatting 500 and dead-lifting 525 in high school. He was a three-time all-conference player and a three-time lineman of the year for his school, as well as an all-conference shot putter.

As a true freshman in 2016, Mayo was relatively high on the Indians’ depth chart, but Catawba stayed healthy enough that it never had to employ him. It became a redshirt year for him, so he’ll still be eligible to play through the 2020 season.

“It wasn’t the easiest thing I’ve ever done, but I got through it,” Mayo said. “I got to travel to all the games and was always prepared to play if needed. I put in a lot of work in the weight room. I don’t weigh much more now than I did in high school, but my body has changed. I’m definitely stronger. I have more weight in the right places.”

Walker is confident the redshirt year is going to be hugely beneficial for Mayo. Catawba basically traded a season of the 19-year-old backup Mayo for a year of the 23-year-old Mayo, when he could be an All-South Atlantic Conference player.

“I’ve been there, and I know it’s not easy to be a redshirt when you’ve been a starter your whole life,” Walker said. “I redshirted at Catawba in 1988 when I entered college as a 200-pound defensive end. That was the year I learned how to be a linebacker and I learned how to be a college football player.”

Walker set the bar high for all Catawba redshirts. He became an All-American.

The future may be just as bright for Mayo, who plans, needless to say, to become a teacher and coach after he graduates.

Mayo’s marvelous Mount Pleasant teammates Reese and Moore aren’t playing football anymore, a combination of circumstances and misfortune. So, in a sense, he’s playing for both of them now. He’s grateful he’s still on the field.

Mayo is also grateful to be playing college football so close to home. Mount Pleasant is only 40 minutes from Catawba.

“My sister is having a baby any day now, and I’m about to become an uncle for the first time,” Mayo said. “Being this close, I can get home for all that important family stuff.”