‘It will make you young again:’ Jack Connery chronicles his life in memoir 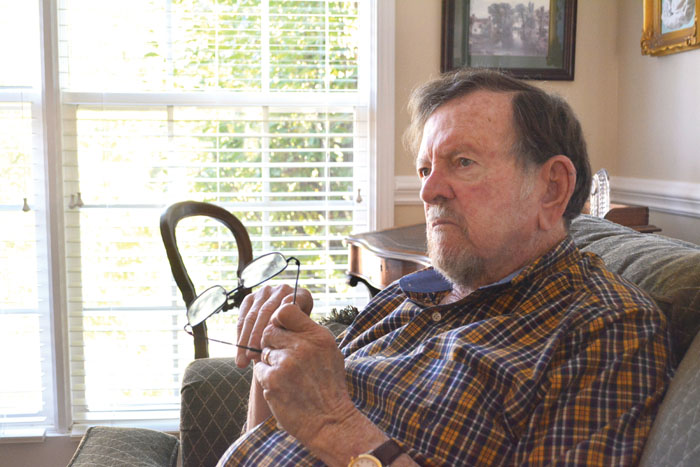 Jack Connery listens to his wife, Jill, talk about the favorite parts of his memoir. Photo by Susan Shinn Turner, for the Salisbury Post.

When Jack Connery’s last uncle died, he realized there was no one left who could tell him stories about his parents when they were young.

“I decided that wasn’t going to happen to my kids,” says Jack, now 83, and the father of four daughters and one son.

He wrote his memoir. Thirty years ago, it was the first time he’d used a computer. He was working as a technical writer, and wrote his own story in the evenings.

Jack wrote about his early years, growing up in the Dust Bowl era of Oklahoma in the 1930s. He was the youngest of four boys, with a sister after him, all of whom are now gone. He finished up with his graduation from college, his marriage to his first wife and his commission in the Navy. His children’s memories pick up from there.

He never planned to publish his memoirs, which he’d titled, “After A Meal Like This, You Don’t Need Dessert!”

“But my kids started needling me,” he says. “I gave this to them in manuscript form for Christmas one year, They said, ‘Dad, you gotta publish this.’ They thought it was pretty good.”

(Full disclosure: Jack asked me to put a final edit on it, and it is pretty good.)

He’s spent the last year doing final edits and finding a publisher. The book is now available online from Barnes & Noble and Amazon, and from the publisher, Author House. Jack plans to do a book signing at Trinity Oaks and in his hometown of Broken Arrow, Oklahoma, where a few high school classmates still live.

“It’s a history of sorts of Broken Arrow in the 1930s, so I thought that would draw some interest,” Jack notes. “And we have friends here now, at Trinity Oaks and at our church, St. John’s Lutheran. The book is a collection of short stories. They’re not all tied together like a normal book, but they’re related.”

It’s a memoir of growing up in the Midwest instead of the South, of a childhood spent on a farm, not close to neighbors his age. His closest brother was four years older, and his sister was two years younger, but not a playmate. At one point, he made up an imaginary friend, Arney Scroggins.

“I won’t do it again, I don’t think,” Jack says of future writing projects. “But I’ve enjoyed working on it. From what I’ve learned from doing this, if someone asks me to help them write their memoirs, I could help them.”

He encourages readers in the foreword: “Writing this book has given me a chance to relive my childhood. I have relived good times and bad times; happy times and sad times. I have laughed and I have cried. I have felt the disappointment in failure, and the elation in success. In retrospect, my childhood was excellent and I’d be happy to live it again.

“I would recommend that anyone in their senior years undertake this task. It will make you young again, and be a blessing to your offspring.”

It helps that Jack has a degree in journalism from the University of Oklahoma — the farthest from home he’d ever been. He owned his own technical writing business after his Naval career and after working in that industry.

So why was it so important for Jack to undertake this project? His one-word answer: Ego!  “There were times in the original writing that I wondered, what am I gonna write about? I’ve led a pretty boring life. But I found there’s always something to write about.”

Jack’s brothers and sisters read the manuscript early on. They didn’t remember things happening the same way he did, he says, “so there’s some imagination in there. But they thought it was good.”

Jack’s father fell ill when Jack was 3 — and Jack only remembers him as an invalid. One with a temper.

“In this day and age,” he says, “Dad could have been arrested for abuse. But we got past it. We didn’t know any different.”

Jack realizes now that living with only half of a lung put his father under extreme stress. He couldn’t work, and Jack’s mom had to work full-time — a rarity for women in the 1930s.

“All of my friends had mothers who were in the home,” Jack says. “I wanted to go home and find my mother at home, just like they did. So I’d find a place to play until I knew she was home, then I’d go home —which was kinda cheating.”

Jack’s mother was a file clerk with President Roosevelt’s Works Progress Administration (WPA), then worked at a bomber plant in Tulsa once World War II broke out. Jack’s father became the “chief cook and bottle washer,” learning to cook — mostly with a skillet — and bake. They rarely had dessert — hence his father’s frequent saying that became the book’s title.

“I don’t know why I remember that,” Jack says, “but somehow it stuck.”

Jack and Jill have been married for almost 23 years. He gave her a copy of the manuscript while they were dating, and she remembers giggling on the plane when reading it after a recent visit. The book has its share of fun and serious memories.

“It was a good life,” Jack says. “We were poor, but we didn’t know it. Everybody was in the same boat.”

But it put additional pressure on Jack to be successful. He let his grades slip in college, and still remembers when his mom got a letter about it.

“It hurt me because it hurt her,” he says, and he worked hard to pull them up. “I worked at a lot of jobs that encouraged me to study, because those kinds of jobs I wouldn’t want to do the rest of my life.”