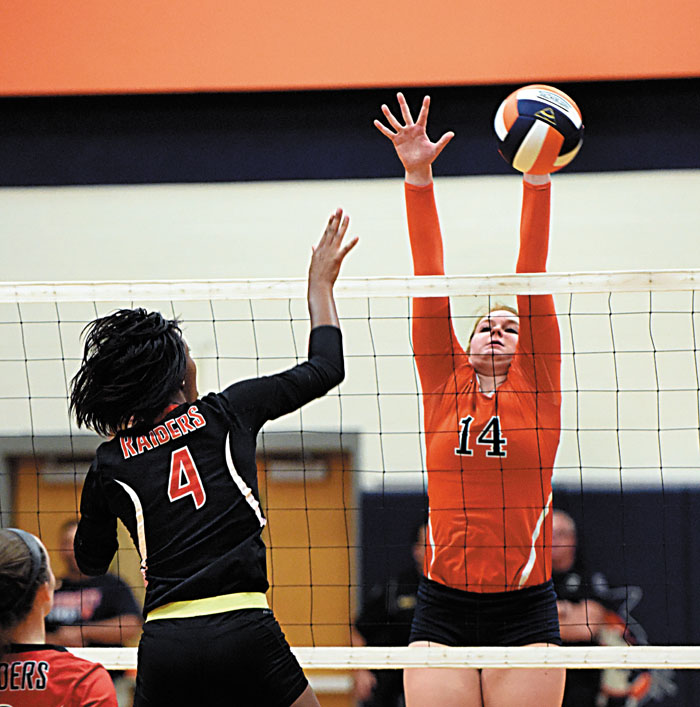 File photo by Wayne Hinshaw, for the Salisbury Post ... Carson advanced in the 3A state volleyball playoffs on Saturday.

CHINA GROVE — Carson’s volleyball team was outscored 25-10 in one dismal stretch on Saturday, but the Cougars figured things out in time to advance against Hickory St. Stephens in the first round of the 3A state volleyball playoffs.

“This is the youngest team I’ve ever had, so maybe that explains our highs and lows,” Carson coach Kelan Rogers said. “We’ve had a lot of up-and-down matches.”

Carson took the first set against the 23rd-seeded Indians in a breeze, but the wheels came off in the second set. Leading, 18-12, the 10th-seeded Cougars collapsed and were outscored, 13-4, the rest of the way.

St. Stephens (15-9) maintained momentum in the third set, racing to a 12-6 lead and gaining confidence with each kill.  The rapidly swelling deficit forced a desperate timeout from the Carson bench. Carson players looked frustrated and bewildered. The match was slipping away.

“I tried a lot of different things,” Rogers said. “I’d like to say I figured out something that worked, but usually these girls just fix themselves. Sometimes in the timeouts, I don’t say anything.”

Carson’s undersized outside hitter Mallory Weast is only a junior, but is clearly the team leader. She’s a great player, which commands a certain level of respect. She’s also the most competitive and most animated and has the most forceful personality.

“I’d give credit for the turnaround to Mallory,” said senior co-captain Lindsay Elmore, a 6-foot-1 middle hitter who is committed to Queens University. “Mallory basically told everyone to get their crap in gear. That was the gist of it, anyway.”

It didn’t turn around immediately, even after the timeout. Carson was down 15-9 when Weast got a kill to cut the gap to 15-10. That’s actually where it turned, as Weast’s kill sent Carson setter Grace Thomas to the service line. Thomas had been struggling, missing two serves earlier in the match. She doesn’t leave the floor often, but her sets had been off so much that Rogers sat her down for a while to regroup mentally.

“We were really down and we’d just lost all of our energy,” Thomas said. “We needed to get back up.  I wanted to do my part.”

Thomas did. She served for 10 straight points.

Carson’s comeback began with a block by Sophie Andrews and Weast. A mistake by the visitors made it 15-12, and St. Stephens coach Julie Harris, sensing the tide turning, got a timeout.

But Carson had its energy back. Thomas had back-to-back aces to chew into the lead. Thomas had to make a dig on the next point, but libero Kary Hales made a perfect set for Weast, and it was 15-all. Weast’s next kill put Carson ahead to stay, and yet another Weast kill capped a stunning 11-0 run. Carson was up 20-15 and was on its way to taking the set.

“We saw how excited St. Stephens was getting and that told us that we had to either pick it up or lose,” Weast said. “We got our intensity back in time. Grace stepped it up. She made a lot of great serves and helped us win that set.”

The only time Carson trailed in the fourth set was 1-0. Weast smashed five more kills. When Carson got a little shaky at the end and was struggling to finish things off, Elmore, who had been quiet, came through with three emphatic kills.

“I had an off day,” Elmore said. “But my teammates did what they needed to do.”

Hales, a freshman, anchored Carson’s defense. She had 28 digs and received serve 24 times without an error. Thomas had 37 assists and six aces. Elmore had eight kills and four blocks. Weast had 15 kills and 16 digs. Alayna Slusser, a freshman outside hitter who spent most of the season with the jayvees, had four of her six kills in the first set.

Freshman Jaden Vaughn had the best day of all the Cougars. While most of her teammates played in flurries, she stayed consistent.

“She saw what was open on the court, and she was putting the ball there,” Weast said.

Vaughn finished with 12 kills (with only one hitting error) and added seven digs.

“We were so down for a while, but then we got it back,” Vaughn said. “We played with intensity, but it was relaxed intensity.”

“Hopefully, we’re going to play a lot better in the next round,” Rogers said. “That’s what we’re looking for.”

NOTES: In 2013, Carson traveled to Hickory to play St. Stephens in a 3A Western final that attracted a SRO crowd. Both teams were undefeated at that point, but the Cougars prevailed, 3-1, to advance to the state championship game.  Vaughn, Elmore and Weast had older sisters (Laura Vaughn, Hannah Elmore and Madison Weast) on that squad. Katie Blackwell, another key player for the current Cougars, has an older sister (Allison), who played on the Carson team that reached the 2012 3A title game.  … Sydney Otterberg had 13 kills for St. Stephens.