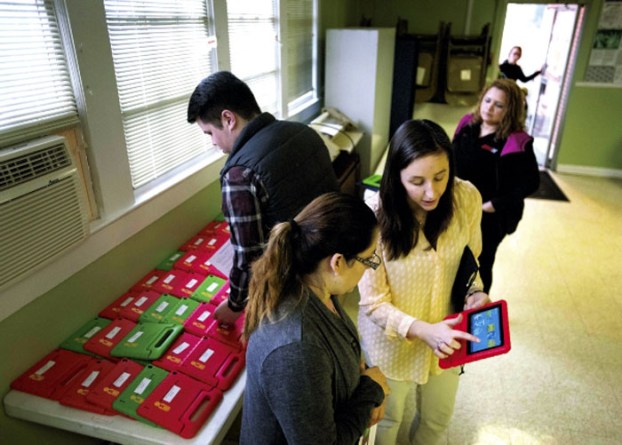 SALISBURY — A local nonprofit group that seeks to increase literacy among at-risk children is changing tracks — but still moving forward.

“ApSeed,” formerly AppleSeed, underwent a name change in recent months because of copyright concerns with Apple Inc. The local organization began in early 2016 and combats low reading scores among at-risk youth to age 4 by providing them with e-readers.

The organization is still in its early phases, having distributed roughly 600 readers to strategic pilot locations, including Rowan County Head Starts, Salisbury Pediatrics and Partners in Learning.

But a name change isn’t the only new thing about ApSeed. Alcorn said the organization has also switched providers for its e-reader. In the past, the organization used modified Kindle Fire tablets that were locked and had services disabled so they could be used to view only pre-loaded literacy apps and e-books.

As the number of devices increased, however, Alcorn and others in ApSeed quickly noticed a problem. Kindle Fire tablets have programming that is constantly searching for Wi-Fi in the background — despite the modified version limiting internet access. Alcorn described the program as a “built-in kill-switch” that would cause the device to malfunction roughly every month.

“The ones we have out there right now, every 45 days we have to go out and reset them,” Alcorn said.

It forced the organization to take production into its own hands and to partner with a manufacturer in Asia to build custom devices.

“So hopefully with these ones, we can focus more on the learning part of it than the repair part of it,” he said of the new devices.

The new “seedlings” are tailored even more toward reading skills and education — lacking much of the background programming that drained the Fire’s battery life and cutting out the device’s camera.

The new devices are also cheaper. Alcorn estimated that ApSeed paid approximately $75 per Kindle Fire and is paying roughly $50 for each new seedling.

“We still have the same amount of money; we can just buy more,” he said.

ApSeed has ordered 1,000 readers for distribution in Rowan County, with plans to replace old readers and start giving them out to new families.

“Of that thousand, probably 500 are already spoken for,” he said.

The eventual goal is for every child younger than 5 to have access to an e-reader. Early exposure to books and language helps level the playing field between children from struggling families and their more affluent peers.

Alcorn said he got the idea for ApSeed when he learned that it’s possible to use a state’s third-grade reading scores are used to determine the number of prisons it should have.

“You can see it, you can feel it that it’s working,” he said.

He hopes to have solid numbers from Head Start locations about ApSeed’s effectiveness in the next six months or so. In the meantime, he’ll keep pushing forward.

“There’s just a real buzz about it, and that gets our motors running, so hopefully we can do something that’ll have a major impact,” Alcorn aid.

Once distribution is streamlined in Rowan County, ApSeed plans to expand to Davie County.

SALISBURY — Two Charlotte men were charged Tuesday with stealing a tow truck and another vehicle from a Raleigh business. Police... read more