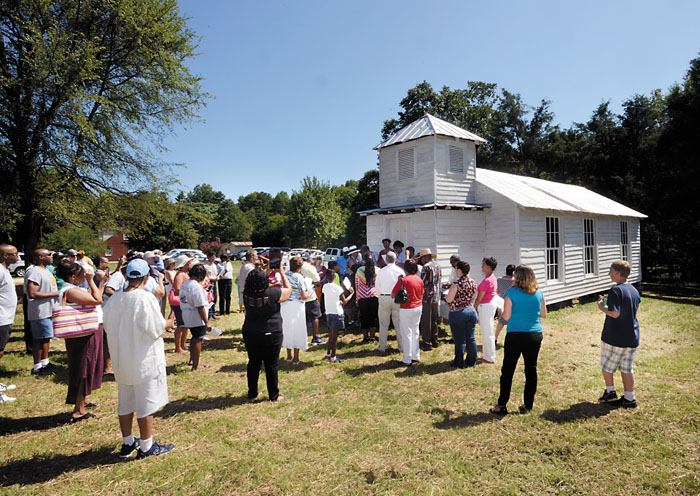 A large crowd gathered outside the restored historic Neely School that served African-American children in the early 1900's for the ribbon cutting. Wayne Hinshaw/For the Salisbury Post

SALISBURY — Neely School joined a select group on Monday when the Rowan County commissioners designated the site a historic landmark.

Built in 1908 by AME Zion minister and farmer Julius Neely, the school taught hundreds of students during its 40 years of operation. Neely built the school to serve his and the African-American community’s children, who could not attend public schools because of segregation.

Hoping to save the school — damaged by vandalism, moisture and nature — Neely’s grandchildren formed the Historic Neely School Foundation in 2011. The foundation moved the school in 2014 from its original site in a wooded area closer to Neelytown Road, near China Grove.

Since then, the school has been fully restored. The foundation has additional plans to upgrade the site.

On Monday, county commissioners Chairman Greg Edds called the request to name the site a historic Rowan County landmark an “easy call.” He said the school a “vital part of Rowan County’s history.”

The commissioners unanimously approved the request. Neely School is now one of only five sites with the designation. Others include Kerr Mill, the Richard Wainwright Barber Farm, Organ Zion Lutheran Church and the Peter Kern House.

“It means a lot to us, and I think it will mean a lot to China Grove also,” said Mary Neely Grissom, who attended the school from first through third grade.

The designation means that the school cannot be moved, demolished or materially altered without a certificate of appropriateness from the Rowan County Historic Landmark Commission, said county Assistant Planning Director Shane Stewart.

Grissom and other family members who attended Monday’s meeting said they plan to add trails, a community building, playground and other upgrades to the area. The original site of Neely School has been marked with a brick foundation.

Grissom said the school foundation wants to host camps and allow schoolchildren to take field trips to the site.

Grissom was one of four people who spoke in support of the request Monday. No one spoke in opposition.

Historian Terry Holt said the foundation is restoring a piece of history about how students in Rowan County were educated.

The commissioners did not talk about the matter extensively before voting in favor of the proposal.

Edds said he thinks it is amazing that the school has survived for nearly 70 years after it closed. Edds said he is glad that the foundation restored the school.

• The commissioners  approved a contract with local architectural firm Ramsay Burgin Smith to oversee construction of a west Rowan County library in Cleveland.

• The commissioners scheduled a public hearing for Nov. 6 to consider an incentive request for a project that could create as many as 118 jobs.

The name of the employer is not clear, but the Rowan Economic Development Commission provided some details in a request to hold the public hearing. Those details include that the company is an existing employer, would create between 108 and 118 jobs, and would invest more than $10 million in new construction and equipment. The commissioners will consider scheduling the public hearing as part of their consent agenda.