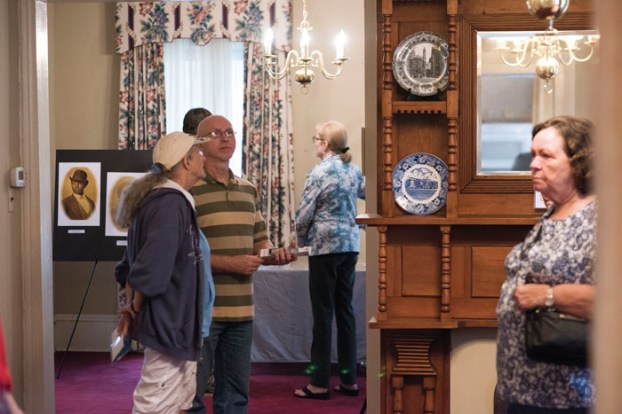 Visitors do self tours of the J.C. Price House on West Monroe Street on Saturday. Salisbury sidewalks were heavily used on Saturday as hundreds of people moved between stops during the first day of the 42nd Annual October Tour presented by the Historic Salisbury Foundation. Jon C. Lakey/Salisbury Post

OctoberTour chalks up an ‘amazing’ weekend

SALISBURY — Final numbers are not in, but officials with Historic Salisbury Foundation estimate that more than 2,000 tickets were sold for this past weekend’s OctoberTour.

“Participation in this year’s tour was, in a word, amazing,” said Karen Hobson, executive director of HSF.

Taylor Sexton Durham served as chairwoman of the 42nd edition of OctoberTour, which coalesced around the Hambley-Wallace mansion on South Fulton Street, the house’s history and that of its most important families through the years — the Hambleys and Wallaces.

Overall, there were 12 tour sites open Saturday and Sunday.

“Historic Salisbury Foundation salutes each and every one of the homeowners who graciously opened their homes to the community for OctoberTour,” Hobson said. “The homeowners and their houses make the tour.”

Susan Sides, president of the HSF board, said the foundation had its most successful tour this year. The tour represents HSF’s biggest annual event and is crucial as a fundraiser for the nonprofit preservation organization.

“Our team with Karen as our leader was fantastic,” Sides said.

More than 300 volunteers served as guides at the sites. Hobson said many other volunteers worked for months to organize the tour and all that came with it, such as the annual Patrons Party, OctoberTour Luncheon and Bank Street Cafe.

The Patrons Party and OctoberTour Luncheon were oversold, Hobson said, and “Bank Street experienced a traffic jam early Saturday morning as the vendors were setting up.”

Bill and Shari Graham were hosts at their home for the Patrons Party, whose theme was “A Night at Magnolia Mansion.” Sides was the guest speaker at the OctoberTour Luncheon and spoke on the life of E.B.C. Hambley.

On a personal note, Hobson said she had guests over the weekend from Charlotte and Winston-Salem.

“They were enamored with OctoberTour — enjoying the mix of houses, walking through our historic areas and experiencing the friendly atmosphere of the tour.

“Madelyn Zoi wrote: ‘Each and every one of you involved should feel proud. You live in a most extraordinary community, but you know that.’ Madelyn makes a good point. OctoberTour weekend reminds us that we are a community, and it showcases historic Salisbury at its best.”

Yesterday: Kids at Faith School present an operetta in 1938