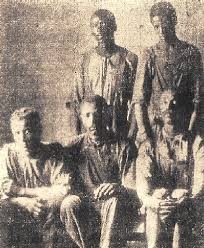 A new book tying the 1906 murder of a white Rowan County family to a serial ax murderer offers new evidence that the three black sharecroppers accused at the time — and brutally lynched — did not commit the crime.

And those men deserve to have their innocence officially recognized, says Susan Barringer Wells Vaughan of Greensboro.

Vaughan, born in Salisbury, wrote a book several years ago about the murders and the lynching, “A Game Called Salisbury: The Spinning of a Southern Tragedy and the Myths of Race.” A descendant of the Lyerly family members killed near Barber Junction Depot, she concluded then that the three men were not involved in the deaths.

She was surprised last week to find reinforcement in a recently released book by Bill James, a noted sports journalist, and daughter Rachel McCarthy James. Their book, “The Man from the Train,” tells the story of a traveling ax murderer who horrified communities a century ago, leaving a trail of death from Florida to Washington State and looping back again.

He rode the rails and attacked families that lived close to train stations in rural areas — just as Isaac and Augusta Barringer Lyerly and their children did.

And in remote areas, he sometimes set his victims on fire — just as the Lyerlys’ killer did.

‘I am honestly floored’

A phone call from the Jameses’ publisher brought the new theory to light for Vaughan, who immediately got the book and started reading it.

“What is most astounding is that this may finally be the solution to the Lyerly murders, one that exonerates the accused,” Vaughan said in an email to the Post.

The publishing house called her because the person recording an audio version of the book needed help with pronunciation.

“I am honestly floored,” she said. “I can’t believe I would never have known about this if Simon and Schuster had not decided to put it on audio and ask how to pronounce Barringer.”

Since then, Vaughan has been researching what course to take to officially clear the accused sharecroppers — Nease Gillespie, John Gillespie and Jack Dillingham — who were charged in the Lyerlys’ deaths. A vicious mob dragged the three from the jail and lynched them before they could go to trial.

By law, the men cannot be exonerated since they were never convicted, and they are presumed innocent. But in the aftermath of the lynching, even though one of the lynchers was prosecuted for hanging the men, much of the Rowan community remained convinced of the sharecroppers’ guilt. Rumors of a rift between one of the men and Isaac Lyerly spread and grew from the day the bodies were found. An 11-year-old boy was said to have heard a confession.

When Vaughan’s book came out in 2007 asserting the trio’s innocence, it met mixed reviews, she said; “either people hated it or they appreciated it.”

She heard secondhand that she was regarded as a pariah in Salisbury.

“I took that as a compliment.”

The Jameses’ book, “The Man from the Train,” dedicates a chapter to the Rowan case, relying heavily on Vaughan’s book and underscoring elements similar to other ax murders committed in the late 1800s and early 1900s.

The authors set the scene: “Let us say that on the evening of July 13, 1906, a man hopped off the train at Barber Junction. It was Friday the 13th.”

Newspaper articles would later relate how Isaac and Augusta Lyerly and two of their children would be found, dead or nearly dead, in a first floor bedroom. Three older daughters sleeping on the second floor were not attacked, however, and had heard nothing. It was the smell of smoke that drew Addie Lyerly down the stairs to find the gruesome scene.

Suspicion immediately gravitated toward the black sharecroppers. “Anyone could have foreseen the second tragedy approaching,” the book says — the lynching.

The Lyerly murder was different from others the James book attributes to the serial killer in two ways. The killer was typically thorough in taking the lives of every person in the house, but he missed the three older girls. And he usually left houses locked up tight and climbed out a window; the front door of the Lyerly house was left wide open.

The authors have a theory about these anomalies.

“He heard a train coming,” they write. “There weren’t a lot of trains on the east-west line, probably two or three trains a night, maybe fewer. If he missed a train, it might be hours before there was another one.

“Out in the country you can hear a train coming from miles away. As he was nearing the completion of his business in Isaac Lyerly’s bedroom, he heard the distant bleating of a train whistle. He had maybe eight minutes to catch the train, maybe ten. … Hurriedly, he dumped the bureau drawer on the victims’ bed and set fire to it, without taking the time to search the rest of the house, as he normally would have done, for more victims. He left the door open as he ran for the train.”

This is speculation, backed up by circumstances. The Jameses cannot prove what happened in that room. But Bill James, who started out researching the 1912 killing of eight people in Villisca, Iowa, says in the book’s preface that he believes knowledge can be created about the past. Atrocities committed in remote places spread far apart were separate tragedies 100 years ago; often only the people in the immediate community knew about them.

“With modern computers, we can search tens of thousands and hundreds of thousands of small-town newspapers, looking for reports of similar events,” James writes.

“And I found one.

His daughter joined in the research, and they found dozens of murders with strong similarities.

“By the time he came to Villisca, The Man from the Train had been murdering randomly selected families for a decade and a half.”

Vaughan thought long ago that anyone could have killed the Lyerlys and fled by train. But she has a few problems with the “Man from the Train.”
For example, James seems to think the Lyerly house could be seen from the train tracks, though it was actually over a hill. “Nevertheless if the killer got off the back end of the train and walked a short distance down the hill past Dillingham’s or the same hill, as I remember the lay of the land, he’d have run into it soon enough,” she said.
Then there’s the open door.
“I’m not sure his explanation for Mueller rushing out of the house before finishing the deed is solid enough,” Vaughan said. “I did tell Addie’s great-granddaughter, though, that she might be here now because of a train whistle.”
Still, she said, the connection of the Lyerly murders to the serial killer is a far better explanation than any other she has come across.  “It makes perfect sense.”
The Jameses count the Lyerly crime as one of nine cases they feel 100 percent certain were committed by the same man.
Vaughan wished someone had started connecting the dots sooner, before the Lyerlys were slain — before the Gillespies and Dillingham were subjected to torture and death.
“It is so tragic for all the victims that this murder happened too early in the series for law enforcement to have made the connection to other similar crimes and to then take some preventive steps,” she said.
“Just knowing of the possible connection might have prevented the lynching, although James also points out that even after law enforcement did start connecting the crimes, locals still seemed to want to blame others living within the communities.”

The trail of murders left behind another trail — one of innocent people executed, lynched or rotting away in prison for crimes they did not commit, the writers say.

Vaughan believes in the innocence of Nease Gillespie, John Gillespie and Jack Dillingham and wants to see some official recognition of it.

And the killer? The Jameses believe they know who committed the crimes — a German named Paul Mueller — but he was charged in only one of them and escaped from authorities. After 1912, the James research found, he was gone without a trace.