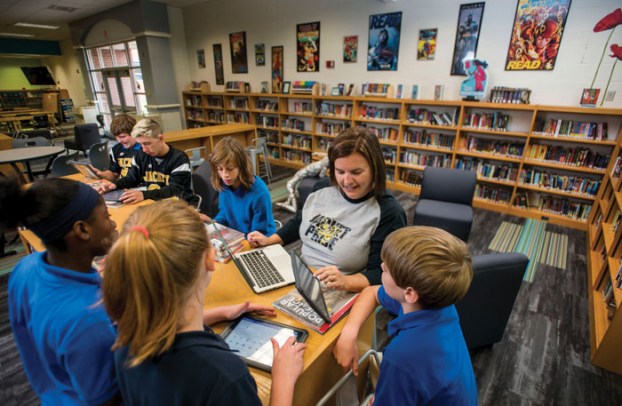 LANDIS — Cheryl Lange, 39, taught English for 10 years before she made the switch to media center coordinator.

For more than five years, she has worked behind the scenes at her schools, greasing the wheels of thought for teachers and cultivating a love of reading among students.

This year, the Corriher-Lipe Middle School media center coordinator was named the State Media Coordinator of the Year by the N.C. School Library Media Association. Lange received the award at a recent association conference.

Winning, Lange said, was “really overwhelming” — because it was unexpected. Media center coordinators frequently are not eligible for district-level recognitions like Teacher of the Year, so when Lange was nominated by former principal Tonya German, she was immediately in a statewide competition.

“I really never expected to have a chance, because you really don’t know who you’re up against,” Lange said.

The application required nominees to list special programs they had been involved in, as well as what they believe the role of a media center is.

“I feel like the media center is very similar to the heart of the school,” Lange wrote for the competition.

“Oftentimes, we’re kind of behind the scenes. People don’t realize how much we do,” she said.

Lange didn’t realize it herself until she became a media center coordinator in 2010. For years, she taught high school English, but she disliked the way grading and parent conferences often cut into her time with students.

As soon as she made her decisin, she marched down to the school library to talk to the media center coordinator. Lange said she hasn’t looked back since.

“I do miss high school English, though,” she said with a chuckle.

She’s found lots to love about working in the media center. In addition to shelving books and making copies, Lange makes it her personal goal to help every student who walks through her doors fall in love with reading.

Lange also helps teachers come up with lesson plans and design curriculum, and even helps co-teach if the need arises.

“I think that there’s never a dull moment. And you never know what’s going to happen,” Lange said.

Lange can’t count the times she’s planned to come to school and have a quiet, “mundane” day,

“And then a teacher will come down and say, ‘I’ve got this idea,’” she said.

That’s all it takes for Lange to toss her boring day out the window and settle into a two-hour planning session in which both she and the teacher are “on fire” with possibilities.

It was one of those planning sessions that gave birth to Corriher-Lipe’s Holocaust conference, which featured author Alan Gratz as well as a Holocaust survivor as guest speakers.

“So it’s not just sitting behind a desk at the library anymore,” Lange joked. “I actually haven’t been behind the desk in weeks — I’m a little scared of it at this point.”

But it’s been a good career choice for her. And winning the award, Lange said, just goes to show how far an employee — and a school — can go with proper support.

“For me, this award is a testament for what a supportive administration and a supportive faculty and people that you’re working with can do,” she said.