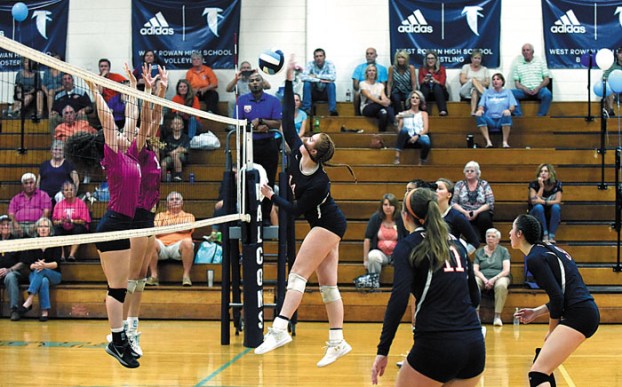 Wayne HInshaw/for the Salisbury Post …
The volleyball seems to be hovering above the net as Carson’s Lindsay Elmore (14) and Grace Thomas (10), left, and West Rowan’s Maddison Myers watch it, during Tuesday’s NPC showdown at Mount Ulla. Carson won, 3-2.

“The ankle got stepped on under the net when we played Statesville last Thursday,” Weast said. “But I needed to play, so we wrapped it up tight, and I played. There are times when you have to try to be a leader.”

Weast did lots of leading. Her 20th kill ended the match.

“But this was a hard one,” Weast said. “Tori Hester is a great player and West (usually Hester, Maddison Myers or Hannah Pratt) picked up balls all night that we thought were sure kills.”

When the same teams squared off in China Grove on Sept. 21, there was hype, but the Cougars mauled the Falcons in a sweep.

But it was different on Tuesday in the West gym. Carson didn’t play as well, and the Falcons played harder. West had the positive wave of emotion that Senior Night always brings, with Braelyn Faust, Cassidy Hewitt, Myers and Lindsey VonCanon the four honorees.

West took it to the Cougars in the first set. It was 9-all early, but after Faust, a 6-footer, and 5-10 sophomore Hester teamed for a loud block in the middle to put West up 12-9, the Falcons took off. Faust had back-to-back aces to push the home team’s lead to 16-11.  Carson never rallied. Faust teamed with setter Ava Link for the block that ended the set and drew a roar from a large crowd that stuffed half the gym.

“That first set, that got us a little shaky,” said Carson senior middle hitter Lindsay Elmore, a Queens commit who had 12 kills. “Granted, West is a tough team and  a great team, but most of what happened in that first set was us. A lot of what they got, we gave them with our errors.”

The second set was entertaining, with Hester pounding nine of her 23 kills in a losing effort in that set. Weast and Elmore combined for nine kills to match Hester. Carson (18-3, 7-2 NPC) took the lead for good at 2-1 on a kill by setter Grace Thomas. A lucky ace by Jaden Vaughn slid off the net, and Katie Blackwell whacked a kill for a 4-1 Carson lead. West stayed within striking distance most of the set, but Carson evened the match at 1-all when Thomas, who had 42 assists and 11 digs, made a nice set for Vaughn, a freshman who contributed six  kills and 17 digs.

Faust had four kills and a block in the third set. The Falcons were down 16-15 when Carson got a break on the next crucial point when a ball struck a ceiling beam and crashed straight to the floor.  Thomas and Vaughn connected again for an 18-15 lead. When Weast eagerly blasted a West over-pass straight to the floor, it was 20-16., Kills by Blackwell and Weast finished off the Falcons. Carson’s freshman libero Kary Hales, who had 24 digs on the night and received serve 49 times, had a phenomenal set defensively.

Hester and Faust (11 kills, 5 blocks) were huge again in the fourth set. An ace by VonCanon gave West a 9-5 lead and forced Carson coach Kelan Rogers to call a timeout. With the Falcons leading 16-10, Carson used its last timeout.  Carson responded with a series of strong serves by Blackwell and Elmore to get back to 17-all. Weast had kills for 18-17 and 19-18 Carson leads, but this was the set in which West (16-5, 5-4 NPC) really showed something.

The set appeared to be slipping away, but Faust and Hester teamed for the block that gave West a 20-19 lead. Then, on the longest point of the night, Hester shook off an amazing dig by Hales and ripped a kill down the left sideline for a 21-19 West lead. Another combo block in the middl by Faust and Hester put the Falcons up 22-20. Then it was Pratt-to Link-to Hester for 23-21. West reached 24 on a Carson mistake, and then Link found Hester for the kill that gave the Falcons the set and a 2-all tie.

Rogers kept his distance from the Carson huddle prior to the fifth set.

“I didn’t say anything,” Rogers said. “I let our captains (Weast and Elmore) take over.”

“Actually, Mallory took over,” Elmore said. “She knew what to say. I just let her go.”

In the fifth set, Elmore’s kill put Carson ahead to stay, 4-3.

Officials called violations on both setters more closely than usual, and Carson used a whistle to take a 5-3 lead. After an Elmore ace it was 7-3, and West coach Jan Dowling was using her first timeout.

Two missed serves by West helped Carson take an 11-7 lead. Thomas set for Vaughn and her dink put the Cougars up 13-9 and led to West’s final timeout. Thomas found Elmore for 14-10, and the last point of the night came after Hales handled a serve by Myers. The freshman made a perfect pass to Thomas, and then Weast sent everyone home.

The teams are likely to meet for a third time in the semifinals of the NPC tournament. That meeting, if it happens, would be at North Iredell.