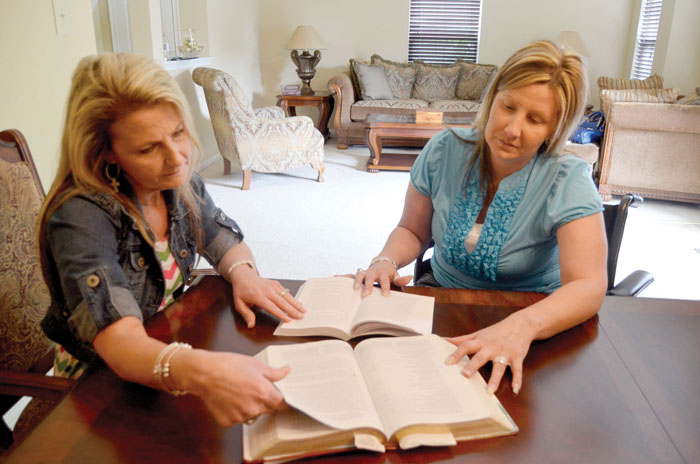 Kendra Whitaker, right, and her sister Trever Dixon read the bible together on a Sunday afternoon at the dining room table. Whitaker, 35, was seriously injured in a June car crash and pinned inside her vehicle after being hit by a man suspected of driving while impaired. Whitaker has a long road to recovery ahead of her, but remains positive. Shavonne Walker/Salisbury Post

SALISBURY — Kendra Whitaker is grateful for the small milestones since she was critically injured in a June collision that left her pinned inside her Toyota for more than an hour.

She was hit by a man traveling in excess of 100 mph and believed to have been driving impaired.

The 35-year-old mother of two remains wheelchair-bound but is focused on a gradual recovery. Her church, Transformation Church, is hosting a fundraiser to help offset her medical expenses.

The Strength in Numbers fundraiser will be Oct. 21 at the church, 1350 Old Stone House Road, Salisbury. Free entertainment will include food, vendors, a bounce house, face painting, a 50/50 raffle, magician William R. Ragsdale and live performances by regional artists.

Some of the performers are Ashley-Rae, the Country Music Legends Band, the Cook Family and the Grass Strings.

The church is also selling Strength in Numbers T-shirts with all the proceeds going to Whitaker. The T-shirts are $10. Pre-orders will be accepted through Sunday. In the event of bad weather, the benefit will be postponed to Oct. 28 beginning at 8 a.m.

Police say Abraham Teya Morris, 43, was driving north on Jake Alexander Boulevard and crossed the center line, striking Whitaker’s car, which was heading in the opposite direction. The collision was just before 6:30 a.m. at the entrance of Jimmy Clean’s Car Wash, not far from Brenner Avenue.

The engine of Morris’ car was thrown from his vehicle and traveled 90 feet. His car spun several times before hitting Whitaker.

It took rescue crews about an hour to free Whitaker from her vehicle. She was flown from the roadside by helicopter to Wake Forest Baptist Medical Center in Winston-Salem.

Morris was charged with driving while impaired and felony aggravated serious injury by vehicle.

Almost immediately upon arriving at the hospital, Whitaker had the first of what would be four surgeries to repair her damaged body. Her diaphragm was ruptured, and the force of the collision caused most of her internal organs to shift into her sternum. A break in one of Whitaker’s legs pierced through the skin. Her pelvis was shattered, as were her ankles and feet.

She has pins and rods in her lower extremities including her toes. Whitaker’s liver was lacerated, she had broken ribs and doctors had to remove her spleen. One lung collapsed, and she had blood in her chest cavity.

During her first surgery, doctors made the most critical of the repairs to her broken body. She had three more surgeries, one of which lasted nearly 10 hours.

When Whitaker’s family, including her sister, Trever Dixon, arrived at the Winston-Salem hospital, doctors were already underway with the first surgery. Whitaker was kept sedated.

Until a few weeks ago, Whitaker been bedridden, which she said is hard for her because she’s always been an independent and outgoing person. Her sister is a registered nurse and has been able to help Whitaker as she continues to recover.

The hurt that her situation has caused her children is hard, Whitaker said.

“Emotionally, it’s hurt both of them. They’ve done well, but it’s been hard,” she said through tears.

She said the crash has been tough for her whole family, but they are people of faith and that is how they’ve managed to remain optimistic.

“I’m not really relying on anything but my faith. God is the only reason I’m here,” Whitaker said.

She’s aware that there are people in the community praying for her and with her and is so thankful.

“I can’t put into words what it means for my Food Lion family and the community. It means so much to me. The love that people have shown me. I thank God every day,” she said.

Whitaker said she had a stranger come up to her who recognized her and just wanted her to know he was praying for her.

“The love keeps coming, and it hasn’t stopped,” she said.

She is set to begin physical therapy soon but will need to overcome the challenge of learning how much weight her legs can take.

Doctors have told Whitaker she can put only 25 percent of her weight on her legs. They’ve also said she’ll always have 20 to 40 percent pain in her body and that her feet will be permanently damaged.

“Ultimately, God is the healer. He has the final say,” Whitaker said.

She hasn’t set any goals but is taking life one day at a time.

“I’m going to live,” she said wiping away tears.

“She’s kept good spirits throughout. What’s helped with that is the love and support, her faith and church family. The community, close friends and co-workers,” said Whitaker’s pastor, the Rev. Jody Almond.

He said she still has quite a bit of recovery to go through and her church family is just trying to encourage and support her.

Almond said the reason the church wanted to host a fundraiser for Whitaker is simple — she’s family.

“We truly look at each other as family, and family helps family. Rather than do the initial, ‘We are here for you,’ we try to help her and let her know, ‘We care about you and are here for you.’ We try to show the love of Jesus. She’s not been able to go back to work, and we just want to love and support her,” he said.

He asked that more than anything, people continue to pray for her recovery and support their cause.

A number of items will be available for a raffle including a Coleman Esky 135-quart cooler; a one-night stay at Hampton Inn & Suites; jewelry; a gift basket from Tilley’s Harley Davidson; a Buffalo Wild Wings basket; a dinner for two at Texas Roadhouse; a free carwash from Sam’s Car Wash; and meals from other restaurants including Carrabbas, O’Charley’s, Outback Steakhouse, and On the Border.

For more information about the Strength in Numbers fundraiser, contact Transformation Church at 704-633-6588.