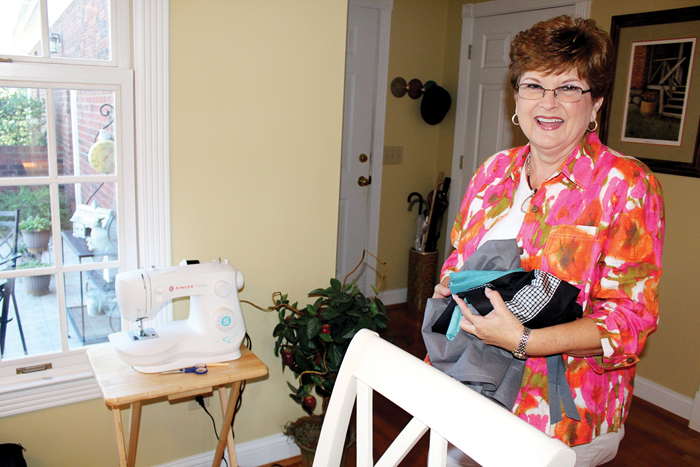 Geneva Austin holds the last few pillowcase dresses of 210 she will send off for Operation Christmas Child this year. Her Sunday school and church circle groups have sewn an additional 90. Andie Foley/Salisbury Post

“If someone had told me a year ago that I would be doing this this year, I would not have believed them.”

These words, said with a laugh, come from Geneva Austin of Granite Quarry. She’s standing in her kitchen, in front of two dozen of the 210 pillowcase dresses she’s sewn since late spring. Next weekend, the dresses will all be packed away in shoeboxes for this year’s Operation Christmas Child.

“I hadn’t sewn anything in probably 45 years, when my daughter was little,” she said, her accomplished smile belying the shake of her head.

Together with her husband, Jerry Austin, Geneva has been coordinating Faith Baptist Church’s shoebox ministry since 2008.

Her involvement with the effort started as a nagging feeling.

The year was 2007, and Geneva couldn’t shake a desire to grow her church’s Operation Christmas Child ministry. Something about the outreach, a Samaritan’s Purse effort that delivers shoeboxes full of surprises to children in need during the holidays, spoke to her heart.

That first year, she donated supplies to the church’s student ministry, as young members were filling boxes. When the urge for more didn’t leave her, Geneva approached her pastor.

“Still trying to get out of it, I asked if it was the student minister’s place to coordinate the shoeboxes,” she said. “He assured me that was not in her job description.”

This information was the push Geneva needed. She next approached her Sunday school class, called the Willing Servants, on the day of a rather fitting lesson: Jonah – a biblical figure known best for running away from God’s call.

The Austins now shop for and collect donations toward this ministry all year long, even asking their sons and daughters for supplies at Christmas rather than traditional gifts.

This year-round dedication would give Geneva the idea to add pillowcase dresses into the mix. A fellow church member, Susan Thomas, approached her with a donation of already completed dresses.

“She brought them to me and I got to thinking,” said Geneva, “‘You know, we could make some of those.'”

Geneva again approached the Willing Servants, as well as her Open Doors circle, for help in the sewing effort. What started as a goal of fifty additional dresses grew, as more and more individuals donated fabric and ribbon to the cause. Some 90 dresses have been sewn or donated by church members, in addition to Geneva’s collection.

“She got hung up on it,” Jerry said of his wife, giving her a teasing look.

Geneva reports that each dress takes somewhere between 15 to 30 minutes to make, depending on what other household chores she’s managing at the time. With over 200 dresses, each with unique embellishments such as pockets and lace, her love of the effort is apparent.

“When I’m sitting over there sewing, I just think about how I would love to see a little girl’s smiling face when she opens her shoebox and gets a pretty dress,” said Geneva.

Of course, the Austins aren’t just spoiling girl shoebox recipients. Each boy shoebox they fill (and they are markedly dedicated to keeping their numbers even), will contain a t-shirt and pair of shoes.

“You can kind of tell we’re passionate about what we do, about helping others,” Geneva said, her own charming smile back in place. “I’ve got a little angel that I hang in my car that says ‘Count your blessings and share them.'”

Jerry, surveying his wife’s effort from a spot in a kitchen chair, sat back and nodded in agreement.