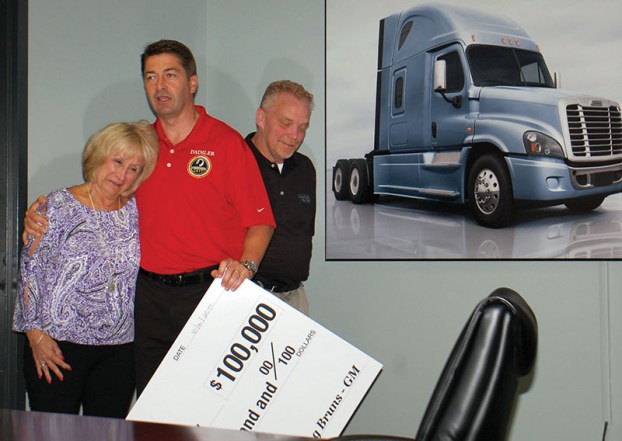 The gift, which prompted tears of joy and gratitude from Jackie Harris of United Way, is separate from the employee giving that gets underway at the plant Monday. The company also matches employee contributions as much as $500.

Freightliner is one of Rowan County’s largest employers.

Bailey said the United Way campaign is “extremely grateful for this generous contribution.”

This past week, Bailey noted, United Way agencies have been helping displaced workers from the DuraFiber plant, which has closed on U.S. 70.

Bruns, a member of the local United Way board, said Harris “and the whole group are working tirelessly for all these families” in Rowan County.

The Freightliner gift comes on the heels of a $100,000 challenge grant that Cheerwine previously announced for the United Way campaign, which has a $1,478,000 goal this fall.

Bruns presented an oversized check for $100,000 to Harris and Bailey, and it was one of several big checks he gave away Friday morning.

The Freightliner plant in Cleveland also announced the following gifts:

• $2,000 to Wreaths Across America, which will help purchase Christmas wreaths for gravesites at the Salisbury National Cemetery.

• $2,500 to the Rowan-Cabarrus Community College Foundation.

• $2,500 to the German Language and Culture Foundation.

Perry Kesler, a Freightliner employee, has been involved with the Wreaths Across America effort for six years. Salisbury National Cemetery next to the Hefner VA Medical Center campus has roughly 6,800 gravesites, and last year the local Legion Riders effort raised enough money to place wreaths at 2,800 markers.

“I would like to get a wreath on every grave,” Kesler said in thanking Bruns and Daimler Trucks North America for the gift. “It will definitely help us out a whole lot.”

Employees at the Cleveland truck manufacturing plant wear red team shirts on Fridays as a way to honor military veterans.

“We have a strong, strong veteran focus,” Bruns said.

Bake sales are held periodically on the plant floor as a way to raise money for Wreaths Across America. Freightliner trucks always participate in the Ride for Pride held over Memorial Day in Washington.

Kris Wolfe, principal of Cleveland Elementary, was on hand to accept the school’s $3,000 check from the Freightliner plant.

Bruns reviewed some of the many initiatives underway at the Cleveland plant. Among four targets the Cleveland plant strives to achieve is quality, efficiency, business excellence and making it “a great place to work,” Bruns said.

Bruns said plant management and representatives of the United Auto Workers meet quarterly at The Arbors, and they are forming an aligned team that “makes us stronger.”

Offices have been modernized and remodeled. Team zones have been created on the plant floor, and the employee cafeteria has been renovated and updated. Employees have team wear, with their names on everything.

Tonight, Freightliner plans a Family Night celebration with Darrell Harwood and his band as entertainment. The company also has held a celebration at The Arbors recognizing employees with 25 years of experience.

The company provides a free Care Center for employees. It has broken ground on a new $40 million Logistics Center and is working on establishing a Daimler Trucks North America Museum on the Cleveland site.

Freightliner helped the city of Salisbury in painting its vintage 1937 firetruck, whose restoration will be unveiled Dec. 8.

“I think we have made major strides … and these events are helping,” Bruns told his visitors Friday.

GRANITE QUARRY — Kim Cress, who retired in 2016 after 19 years as the town’s maintenance director, says he would bring a... read more