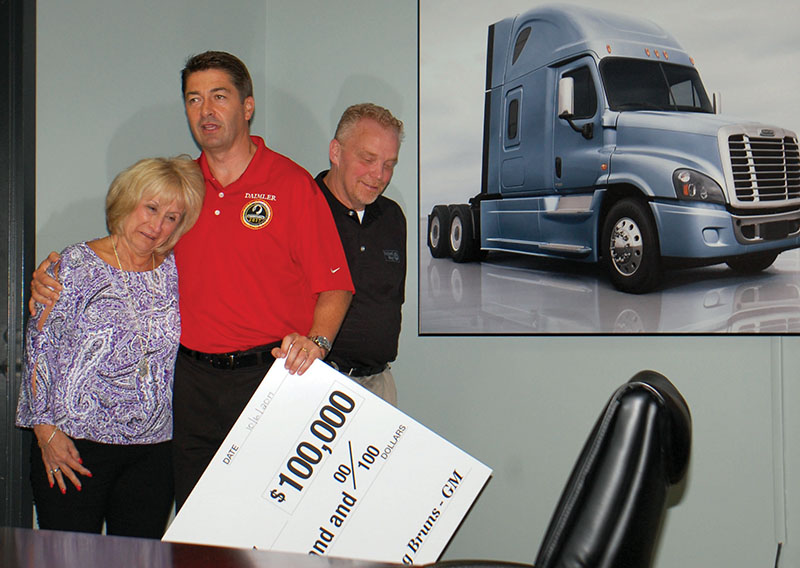 The outright gift, which brought tears to Jackie Harris of Rowan United Way, is separate from the employee giving that gets underway at the plant Monday. The company also matches employee contributions to United Way up to $500.

Freightliner is one of Rowan County’s largest employers.

Bailey said the United Way campaign was “extremely grateful for this generous contribution.” This past week, Bailey noted, United Way agencies have been helping the displaced workers from the DuraFiber plant, which has closed on U.S. 70.

The Freightliner gift comes on the heels of a $100,000 challenge grant Cheerwine announced previously for the United Way campaign, which has a $1,478,000 goal this fall.

Bruns, a member of the local United Way board, said Harris “and the whole group are working tirelessly for all these families” in Rowan County.

Bruns presented an oversized check for $100,000, and it was one of several big checks he gave away Friday morning.

The Freightliner plant in Cleveland also announced the following gifts:

• $2,000 to Wreaths Across America, which will help in purchasing Christmas wreaths for grave sites at the Salisbury National Cemetery.

• $2,500 to the Rowan-Cabarrus Community College Foundation.

• $2,500 to the German Language and Culture Foundation.

Look to Friday’s print edition of the Salisbury Post for a longer version of this story.