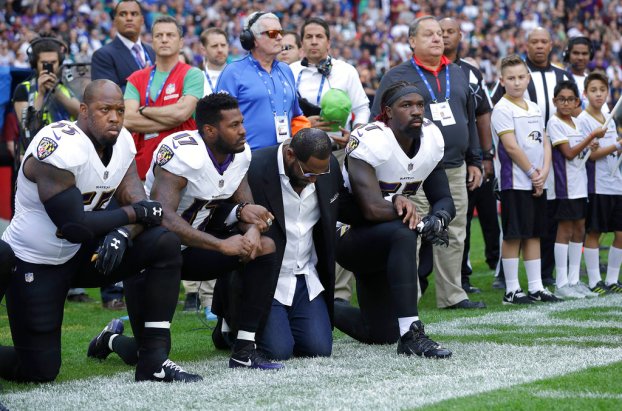 Baltimore Ravens outside linebacker Terrell Suggs, from left, Mike Wallace, former player Ray Lewis and inside linebacker C.J. Mosley kneel down during the playing of the U.S. national anthem before an NFL football game between the Jacksonville Jaguars and the Ravens at Wembley Stadium in London, Sunday Sept. 24. (AP Photo/Matt Dunham)

Letter: Players should do something constructive

No more Sundays watching pro-football at our house.

I don’t give a damn why you’re not standing for the national anthem. How about giving some of the millions you’re paid because you live and play in the United States to build playgrounds, daycare centers, basketball courts and better schools in minority neighborhoods instead?

How about funding drop-in centers for mental health and substance abuse? How about starting up a food distribution center? Build a wing on a hospital for premature babies or a tutoring program to help kids who are falling behind. You can dedicate them to whatever your cause is.

Can’t you come up with something constructive to help heal this country, and to help the people you say you’re protesting for?

If I’m watching football on TV, I want to see a good game, fairly and well played. I don’t want to see a bunch of men who have benefited from being Americans, showing disrespect for my flag and my country. And guess what: I won’t watch. If you’re so unhappy here, move.

Letter: Can’t force loyalty in US

Regarding the issue of NFL protests, if you respect the U.S. Constitution and the decisions by the U.S. Supreme Court,... read more