Editorial: O’er the land of the knee 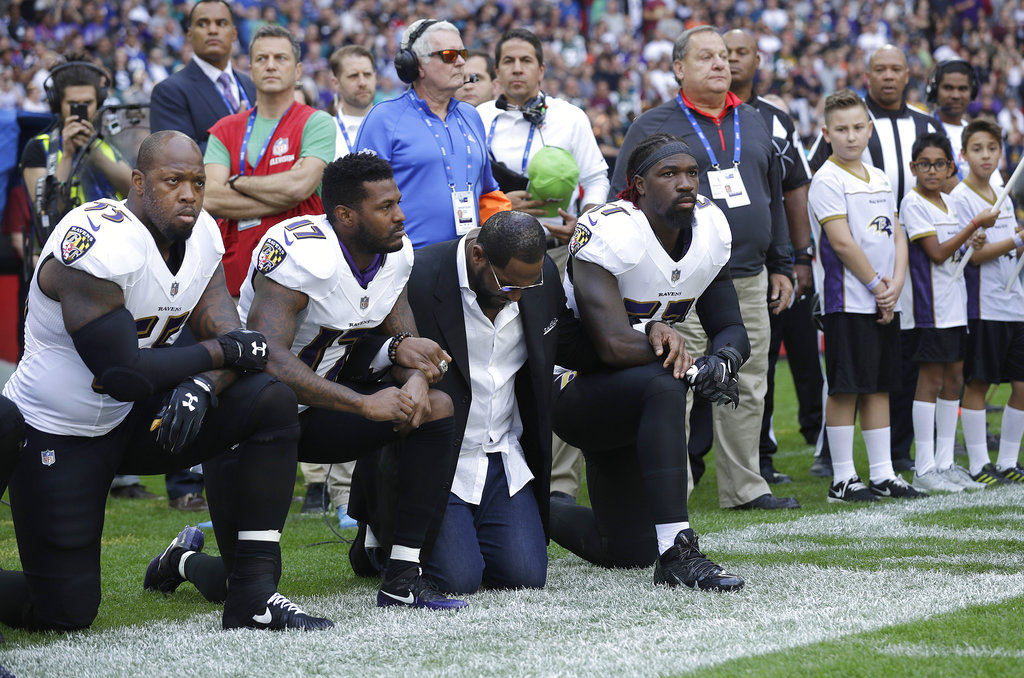 Baltimore Ravens outside linebacker Terrell Suggs, from left, Mike Wallace, former player Ray Lewis and inside linebacker C.J. Mosley kneel down during the playing of the U.S. national anthem before an NFL football game between the Jacksonville Jaguars and the Ravens at Wembley Stadium in London, Sunday Sept. 24. (AP Photo/Matt Dunham)

Whatever happens as President Donald Trump and the NFL tussle over protests during “The Star Spangled Banner,” the controversy should not lead ballparks to sideline the national anthem.

The closing lines of the anthem, have an unwritten “Amen” in sports fans’ minds. “O say does that star-spangled banner yet wave, O’er the land of the free and the home of the brave?”

The anthem is as much a part of U.S. sports as overpriced hot dogs and sodas.

With a call to boot players who don’t show what he considers sufficient respect for the anthem and the flag, the president has once again done what he does best — rile up his base and distract the country from weightier issues.

Tensions appear to be mounting on both sides. What started with one player last year — Colin Kaepernick not standing during the anthem to protest what he viewed as the oppression of people of color — has spread across the league. Trump splashed the spark with gasoline by suggesting team owners fire the “sons of b——-.”

That just stoked more protest, with players on 28 NFL teams showing their objections in some way over the weekend, and some team owners joining in.

It’s been suggested that the situation could be defused by simply downplaying the anthem — if ballparks play it at all. Ideas include playing the anthem before players emerge from the locker room, playing it at a different interval in the game or retiring the practice altogether.

That would be a mistake.

There is room for protest in American society; free speech is one of the principles the nation is founded upon. Two U.S. athletes made the Black Power salute during a 1968 Olympic medals ceremony. The world went on.

Real disrespect for the anthem would be players going about their business, as workers do in concession stands and ticket booths. If they really didn’t care about their country, players could have continued their warm-ups, talked with coaches or joked around on the bench. Instead, they stopped, went silent, took a knee or joined arms — and in doing so made a powerful statement. They’re sticking together not only in support of Kaepernick’s message, but also in protest of Trump’s attack. At this rate, NFL stadiums could soon look like the land of the knee.