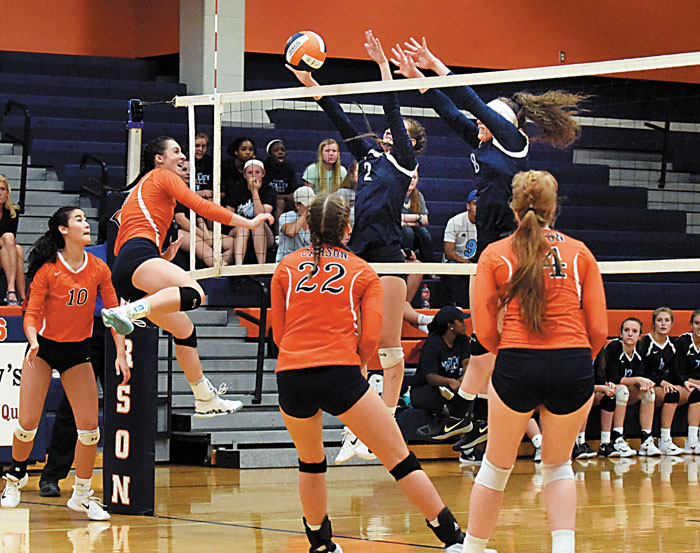 CHINA GROVE — The Carson Cougars put a smile on the face of demanding coach Kelan Rogers on Thursday, beating West Rowan more easily than anyone expected.

Carson rolled 25-13, 25-21 and 25-17 in a matchup that had significant implications for the North Piedmont Conference as well as Rowan County. Carson, which has dropped just one match to a Rowan opponent since Rogers arrived in 2009, is still in charge of the county and is the top challenger to NPC leader North Iredell, one of the best in 3A.

“We played today like we’re capable of playing, the way we’re supposed to play, the way we need to play every match,” Rogers said. “The girls were great. We didn’t do anything that I’m displeased with.”

“This was  a match that people have been talking about it since the season started,” Thomas said. “We didn’t hype it up any ourselves, but we  knew that we would show what we could do on the court. This is what we can do.”

West (10-2, 2-2 NPC) has its best team in years and a phenomenal all-around player in sophomore Tori Hester, but the Falcons got off to a nightmare start. Carson sophomore Katie Blackwell served eight straight points early in the first set, with two aces, and Carson (12-2, 3-1 NPC) suddenly led, 9-2.

“We were ready and we came out very strong,” Elmore said.

West coach Jan Dowling used her timeouts at 6-2 and 19-6, but the tight Falcons couldn’t hit anything between the lines. It snowballed to 22-6, and Carson had those 22 points on the scoreboard before Hester finally got her first kill.

“West was making a lot of errors and when your opponent is making errors, it helps,” Rogers said. “But it wasn’t all West. We were getting aces, kills, digs, playing very well as a team. We’ve been on a roller coaster, up and down, in a lot of our matches, but that wasn’t the case today.”

West still had a chance if it  won the second set, and the Falcons made a bid for it. West setter Ava Link was starting to get the ball to Hester, and she blasted the Falcons into a 12-8 lead that forced Rogers to call a timeout. That was the day’s defining moment. Carson responded tremendously after that timeout.

“West had the lead and was getting momentum, but that’s when we decided enough was enough,” Thomas said.

Carson scored seven straight points after that timeout. Thomas set up Elmore for the point that put Carson ahead, 13-12. Thomas found open space behind the front row for a clever dink for 14-12, and Vaughn, who was on a serious service roll, got the ace that made it 15-12. Then it was the Falcons calling timeout.

West fought that set right to the end, getting within 23-21 on back-to-back kills by 6-footer Braelyn Faust, but the Cougars got the last two points they needed on whistles.

Down two sets on the road, there was little hope for a West comeback, but Link and Hester, who finished with 14 kills, were clicking, and the Falcons pulled ahead in the final set, 9-8. But West got away from Hester at that point and there were four straight hitting errors. Without having to do a lot, Carson went on top, 12-9.

Then West relocated Hester, but she missed two straight chances, and the hole was 14-9.

“Grace and I had a good connection going today,” Elmore said. “But give a lot of credit to our defense. Those girls were making so many great pickups. That’s what put us in great position to score.”

Elmore and Sophie Andrews, who had her moments in a middle blocker role, are seniors, but it’s still mostly a young team that relies heavily on Vaughn and freshman libero Kary Hales, who leads the team in digs.

“We are young and maybe that’s why we’ve been on that roller coaster,” Rogers said. “But I think everyone is in a role now where they are comfortable. We just have to keep pushing.There aren’t any roll-over games on our schedule.”

Carson rolled West right off a cliff on Thursday, but it’s a long season. The Falcons will look to redeem themselves in the rematch in Mount Ulla on Oct. 10.

“Every team has its bad days,” Hester said. “This just wasn’t our day.”