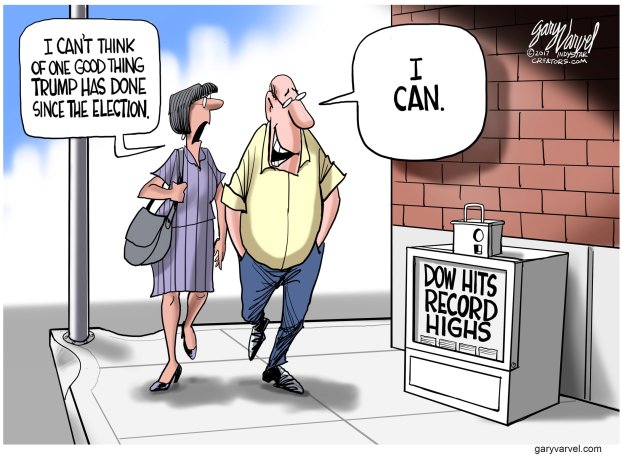 Hugh Hewitt: All in all, Trump has had a pretty good eight months Eight months of President Donald Trump is one-sixth of his term. By analogy, he is standing on the fourth tee of his first round. His score is one over, largely because of penalty strokes for the flubbed response to Charlottesville, Virginia, and some out-of-bounds tweets (offset in part by superb federal responses thus far to Hurricanes Harvey and Irma). What have he and his team accomplished? Any golfer knows it’s far too early to guess at the final score, but we can identify the actions and words that will define the first eight months and endure as notable.

The president has delivered three significant speeches: his “American carnage” inaugural address, his speech to the assembled leaders of Sunni countries wherein he demanded that they demand of their religious authorities the preaching of a message that the terrorists would find their souls eternally damned, and his “West is best” speech in Poland. All were significant for the bluntness of messages. Large parts of America believe the president said things that needed saying, and which President Barack Obama refused to say and President George W. Bush said only in diluted form.

He has appointed Justice Neil Gorsuch to the Supreme Court, thereby guaranteeing at least for a time the continuation and perhaps strengthening of “structural federalism,” the robust defense of the First Amendment, and a generally hands-off policy on election law and redistricting. The balance is delicate, and if Justice Anthony Kennedy retires next year and is replaced by another Gorsuch, it will likely be preserved for a decade or more. If more than one vacancy occurs and the president keeps to his word, Trump’s most enduring legacy will be his mark on the courts.

These nominations, by the way, are the real deal-breaker with conservatives, not the Deferred Action for Childhood Arrivals program, Obamacare repeal or anything else. Many things are important to them, but the Constitution is No. 1 and national security No. 2. Breaking faith with the president’s GOP coalition partners on the courts would shatter conservative support for the Trump administration.

There is no sign that the president does not grasp this fundamental truth. Media reports of poisonous relations between Trump and House Speaker Paul Ryan, R-Wis., and Senate Majority Leader Mitch McConnell, R-Ky., seem almost absurdly comic in their hyperbole, as do predictions of doom from the base because of a “deal” on DACA. The Trump-congressional GOP coalition government gets along well enough.

On national security, Trump has assembled a team of exceptional competence, and the Trump coalition is happy with most of what that team has done, from the cruise missiles into Syria to the explicit embrace of Israel as one of our closest allies.

That said, the budget increase for defense is good but not great, and Trump has failed to provide a plan to reach a 350-ship Navy, which could haunt him in 2020 if a Democrat flogs him for this failure.

His regulatory rollbacks are proceeding. He and the GOP-led Congress used the Congressional Review Act to rescind 14 Obama-era rules. Key figures including Environmental Protection Agency Administrator Scott Pruitt, Health and Human Services Secretary Tom Price and many others are pursuing ambitious and much-needed rollback agendas. The progress on regulatory reform here is huge and enduring, and the media doesn’t appreciate how much it is welcomed across the country.

Congress provided the president with plenty of money for repairs of border barriers, more than enough for border-security enthusiasts. A deal on DACA that mandates the use of E-Verify and ends chain migration in favor of admission based on skills preferences will be another accomplishment, as will be any sort of tax cut to the corporate rate. Hand-wringing by hard-liners on immigration is just amplification of the extreme edge of the GOP.

All in all, a pretty good eight months. Not perfect by any means, but a bag of big wins and mostly progress on many fronts. We await special counsel Robert Mueller’s conclusions, but as long as no indictments include the president or his family (and so far that looks to be the case), it will not trouble the president or his base.

Keep the conservative judges coming, and the Trump coalition will hold. Get to 350 ships, and it will prosper.

Hugh Hewitt is author of “The Fourth Way: The Conservative Playbook for a Lasting GOP Majority.”

Many thanks to Mark Wineka who has done a marvelous job of informing the public about the North Carolina Dental... read more