Clear sailing: No. 2 Clemson poised for another title run 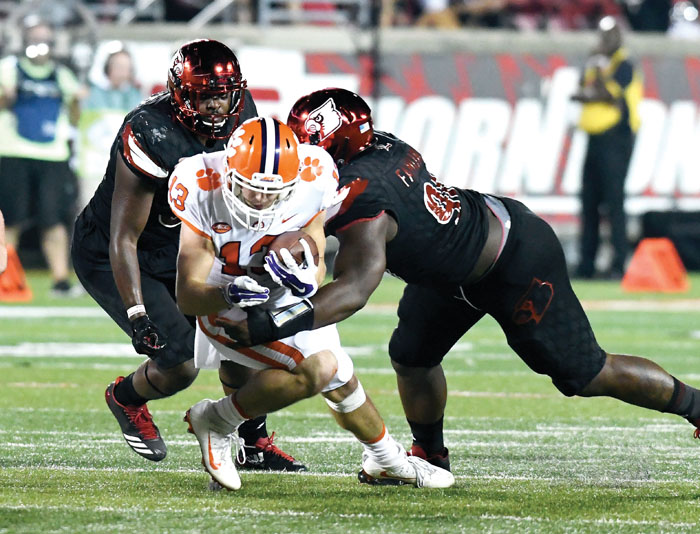 CLEMSON, S.C. (AP) — No. 2 Clemson made it through its difficult start unblemished and now the defending Atlantic Coast Conference and national champs look poised for another title run.

Not that the Tigers are all that interested in talking much about it.

Clemson co-offense coordinator Tony Elliott said the team is focused on next week, not the next three months.

“I don’t expect that to change. It’s the quality of the young men that we have, the character we have, the fundamentals of our program that everything’s earned,” Elliott said Monday. “That we earn everything every day.”

Elliott said his offense had so many questions entering the season with seven new starters, including quarterback Kelly Bryant who was taking over for two-time Heisman Trophy finalist Deshaun Watson, that coaches were eager to see them in action. They knew they would get answers against top-15 opponents in Auburn and Louisville.

Clemson’s defense was dominant with 11 sacks in defeating Auburn 14-6. Then this past week, Bryant led a dynamic offense and outplayed Heisman winner Lamar Jackson in the Tigers’ 47-21 dismantling of the Cardinals.

“These guys like each other,” coach Dabo Swinney said. “They’re hungry. They pull for each other and practice the right way. We have the type of depth you dream of as a coach.”

Clemson’s depth might not get tested much the next couple of months, but a lot of players are expected to get playing time. The Tigers will be favored to win — many by sizeable margins — the rest of their regular season games. The biggest challenges should be at No. 13 Virginia Tech in two weeks and No. 12 Florida State at Death Valley on Nov. 11.

Clemson has won its past four against the Hokies, including a 42-35 win in last year’s ACC title game. The Tigers have beaten Florida State the past two seasons and this year’s Seminoles’ squad will enter Clemson without injured quarterback Deondre Francois, who was lost with a season-ending injury in week one against Alabama.

“Sometimes, you think, ‘We got a good chance to go back-to-back’” as national champions, he said.

But if the Tigers spend too much time thinking like that, it could be costly, defensive back K’Von Wallace said. Few people gave Pitt the chance at upsetting the Tigers at home last year before the Panthers’ 43-42 upset.

Non-ranked teams toppled Top 25 teams “all the time,” Wallace said. “Anything can happen, so we prepare like next game is the biggest game.”

Clemson piled up 613 yards against Louisville , including 297 on the ground. That could be bad news for the Eagles, who allowed 515 yards on the ground in a 49-20 loss at home to Notre Dame last week.

“There’s going to be a lot of talk from students or press and media, just a lot of outsiders getting in our ears, and our biggest thing is that we’re going to need to kind of tune them out, stick together, trust in the coaching, trust each other that we’re all going to have each other’s backs,” Boston College receiver Charlie Callinan said. “Go out there and give it our best shot against Clemson.”

Victories like Clemson’s had the past two weeks also mean a bigger profile for Bryant, who finished with 316 yards passing (one yard fewer than Louisville’s Jackson) and a touchdown. Bryant, named the ACC offensive back of the week Monday, also rushed for two scores.

Bryant’s not worried about the increased attention on him as long as the Tigers keep winning.

“It’s good and all,” Bryant said. “But I’m just focused on the team and the offense and us getting better.”