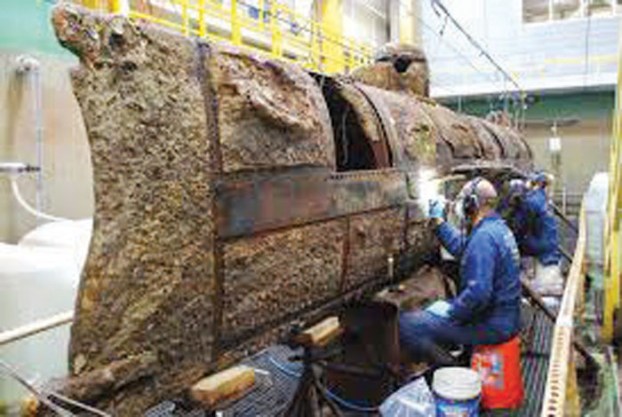 A worker removes decades of sand and shell from the H.L. Hunley, a Civil War submarine that sank off South Carolina, killing the eight crewmen aboard. The work was being done by Clemson University researchers at Clemson’s Warren Lasch Conservation Center in North Charleston, S.C. Photo courtesy of Friends of the Hunley

Wayne Hinshaw: The mystery of the H.L. Hunley submarine crew

One of the great military mysteries in American history might now be solved by a Duke University graduate student after three years of research.

Rachel Lance and her colleagues dedicated their research to resolving what happened to the H.L. Hunley crew of eight men who died in the Confederate submarine in the Charleston, South Carolina, harbor during the Civil War.

In 1864, the Hunley made its first and last mission to attack and sink the Union ship USS Housatonic. The Hunley also sank and never returned to shore, creating many theories of what happened to the submarine and its crew.

In 2000, the submarine was raised from the bottom of the ocean with great fanfare and national coverage by National Geographic. A team of Clemson University scientists conducted a study of the sub.

At the time, Post photographer James Barringer went to Charleston to photograph the recovery of the Hunley as it was brought to the surface and ashore.

In 2007, I visited the abandoned Navy base in Charleston where the Hunley research was being conducted. At the time, the Hunley was submerged in a tank of water to desalt the metal. I was not allowed to photograph the submarine as in sat in the tank of water.

Researchers had constructed a life-size model that I photographed and inspected and marveled at how cramped the crew must have been as they hand cranked the sub underwater. The pocket watch of the submarine captain, Lt. George Dixon, was on display with the clock hands at 8:23. There were re-created artistic drawings of the crew members on display.

Lance had formerly worked as a biomechanist at the Navy base in Panama City, Florida, before entering graduate school at Duke University. She explained her findings last month in the Aug. 23 journal PLOS ONE.

The background for the Hunley mission involved a mysterious 40-foot-long Confederate submarine with a cooper keg of 135 pounds of gunpowder attached to a 16-foot pole that successfully rammed the Union ship Housatonic in the dark of night, blowing up the Union ship and sinking it.

The Hunley sank about 300 meters away from the blast. The 150-plus-year-old mystery is why it sank.

When the Hunley was recovered in 2000, the skeleton remains of the men were all seated at their positions in the cramped sub. There were no broken bones on the men and no evidence that they had attempted to get out of the mostly undamaged submarine. There have been theories that the men suffocated and drowned.

In the published report, Lance said, “The disappearance of the Hunley has long stood as one of the great mysteries of American history. Finding the cause of the death of the crew has finally allowed us to declare the mystery solved.”

The torpedo blast would have created a shockwave, according to Lance, that would have ruptured the blood vessels in the lungs and brains of the crew members.

“This is the characteristic trauma of blast victims,” she wrote. “They call it ‘blast lung.’”

The instant death of the crewmen would leave no damage to their skeletons. The soft tissue of the lungs and brain would have decomposed over the hundred-plus years. Their lungs would have filled with blood, instantly killing the men.

In her three years of research, Lance designed a model of the Hunley one-sixth the length of the 40-foot sub. Durham sculptor Tripp Jarvis built the model and named it the CSS Tiny. Lance took the model to a 8-acre pond on a farm in St. Lewis in Edgecombe County owned by Bert Pitt of Pitt Family Farms for her tests. There, she set off explosions in the water to measure the blast effects.

If this were a “CSI” crime scene, it would be interesting to note that the Hunley’s captain, Lt. George Dixon, had his gold pocket watch with him in the submarine. Researchers discovered that his watch stopped at 8:23, about the time of the attack, most likely because of the concussion of the blast.

Researchers in 2007 said that “something traumatic — perhaps water, a shock wave, or some other intervening force — caused it to stop at the precise time.”

During the Civil War, military reports were not always accurate or uniform. The official Union report of the attack on the Housatonic listed the time about 20 minutes later than when Lt. Dixon’s watch stopped.

He added, “We thought it would be very simple. … Something must have happened at the time of the attack. We would just put those pieces together and know everything about it.”

Now, thanks to Dr. Lance’s research, maybe “we have put the pieces together and know everything about it.”