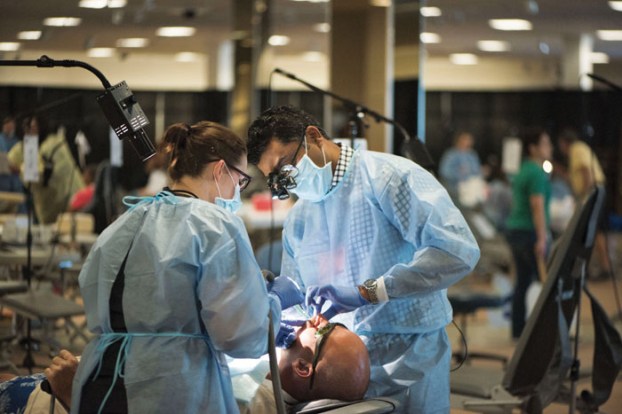 Bekah Motley and Dr. Janak Patel work to extract teeth from patient Woody Page during the free dental clinic. Salisbury's third N.C. Missions of Mercy dental clinic is being held at the West End Plaza. Hundreds of people got in line early to improve their chances of getting seen by dentist. Jon C. Lakey/Salisbury Post

SALISBURY — As Woody Page of Albemarle sat up from the dentist’s chair Friday, he could only mumble. The upper part of his mouth was filled with gauze because Dr. Janak Patel and assistant Bekah Motley had just extracted 10 teeth.

But Page was happy. In a notepad, he wrote, “Wonderful Dr.” Then a volunteer walked with him toward the checkout station and pharmacy where he could pick up some pain medicine for the night ahead.

Page was among hundreds of people who showed up Friday for the first day of the two-day N.C. Missions of Mercy Dental Clinic in Salisbury. Dentists, dental assistants, hygienists, dental students, X-ray technicians, lab personnel, pharmacists, donors and scores of community volunteers make this outreach clinic of the N.C. Dental Society possible.

Salisbury’s free clinic is being held in the former J.C. Penney store at West End Plaza. Dental professionals and volunteers will be on the site again from 6 a.m. to 3 p.m. today. Friday’s work extended from 6 a.m. to 5 p.m.

Two previous Salisbury clinics (in 2013 and 2015) had been in Goodman Gymnasium at Catawba College. At each of those clinics, about 800 patients were treated over the two days, and organizers hope to reach at least that many by the end of today.

The floor of the former department store was filled with as many as 60 dental chairs.

But the wait for treatment can be a long one. Friday’s first patient showed up at the old Penney store at midday Tuesday. Thursday afternoon, some 50 people were screened, including some 40 patients who would require partial plates (a two-day process), and others were given wristbands to help secure their place in line Friday.

Meanwhile, hundreds of others lined up early Friday morning. The line extended on the sidewalk from the former Penney store to the former Belk store. Many waited in lawn chairs or stood under umbrellas to shield the sun.

About 11 a.m., clinic organizers moved all the people inside the mall so they could wait in much cooler temperatures.

Nina Espinal, who lives in Concord, heard about the clinic from her sister, a student in the dental program at Rowan-Cabarrus Community College. “I have a couple cavities I’ve had for a couple of years,” Espinal said.

She and her husband own a pressure-washing business, and all their money is wrapped up in their new venture. “We’re in that full-deck stage,” Espinal said. “Right now, I’m saving money everywhere I can, including health care.”

Espinal said she puts off going to the dentist for herself in favor of other things.

“I have a high tolerance for pain,” she said. “I’m a mom, and I don’t take care of myself. I take care of everyone else.”

When they were outside, Nina was holding an umbrella over the head of a new friend she met in line, Katrina Walker of Salisbury. Walker said she needed a tooth pulled and that’s why she had been waiting in line since 6:30 a.m.

She can’t afford going to a dentist otherwise, she said. Walker and Espinal were waiting next to 82-year-old Vincent Wilkins of Salisbury. He also needed a tooth pulled. “It hurts every now and then,” he said. “If they get that, I’ll be glad.”

Wilkins said this was actually the second free MOM clinic he had attended, counting one in Winston-Salem.

Walker borrowed a chair to sit in from Shirell Huntley, who had gotten out of bed in Charlotte at 4 a.m. Friday to travel to Salisbury for the clinic. One of Huntley’s teeth broke off last week, and even though she carries some insurance, she did not have the $750 to $800 out-of-pocket expense it was going to cost for a crown, she said.

But she knew it had to be addressed.

“My mother always told me a closed mouth doesn’t get fed,” she said. “… Your mouth (tending to its care) will fix a lot of things in your body.”

To help with the pain associated with her broken tooth, Huntley said she had been packing her mouth with BC Powder. “I’m like Richard Petty,” she said with a laugh.

Huntley had to ask her employer, Harris Teeter, for the day off so she could attend the clinic. “I’m just thankful I’m here,” she said. “I’ve got to do what I’ve got to do.”

Huntley, who has attended the free MOM clinic in Charlotte in the past, said she appreciates the dentists who volunteer their time. “That’s a blessing to me,” she said. Huntley wasn’t guaranteed to be treated by the end of the day Friday, but she didn’t want to leave without a wristband assuring treatment today.

By 11 a.m. Friday, 329 people had reached the mall-side door leading into the Penney store. More stops and waiting areas were ahead of them.

They first had to enroll and fill out paperwork. They then went to a medical triage for blood pressure monitoring and other evaluations. It was on to X-ray from there. A mobile X-ray unit was parked outside, and all the patients went through.

With X-rays in hand, a dental triage team decided what things should be addressed and to what new waiting areas patients should be assigned. For example, they might be sent to the cleaning-only, extraction or filling areas.

All along the way, volunteers helped guide them from place to place.

After dental work was complete, the patients could check out and go home, often with a plan in hand for other things in their mouths they should address. The on-site pharmacy — not every MOM clinic has one —  was manned by Mike and Steve Fuller and made possible by QS1, the Community Care Clinic and Salisbury Rotary Club.

Fibrant also provided the hard-wiring needed in the pharmacy.

As he almost always does, Arey Grady of Kinston provided the dental lab for the MOM clinic. He has been providing this service for eight years.

For the dental professionals, the work is constant. “About 9 (a.m.),” dentist David Mayberry said, “I thought it had to be lunchtime.”

Mayberry combined with Dr. Jim Dunkin in bringing the first MOM clinic to Salisbury in 2013, and he has stayed heavily involved. Krista Woolly, executive director of the Community Care Clinic, served as overall coordinator.

Shirley Corriher, who lives in Hidden Creek in Salisbury, traveled to West End Plaza on Thursday so she could be assured of treatment Friday. She said she likes to take advantage of things offered free to senior citizens.

She was having her teeth cleaned Friday.

“It’s a great thing that they’re doing,” she said. “It costs so much nowadays to get your teeth (addressed).”

Prior to working on Page’s mouth, Patel extracted a tooth for Gina Hernandez, and she gave Patel high marks for being “very gentle” with her. She had been taking a lot of Ibuprofen for pain, Hernandez said.

“That dentist was just awesome, and I’m a big baby,” she added.

Another star Friday was Jon Hansel, whose Holly Springs BBQ Co. was serving up barbecue to all the volunteers. Hansel, who sells implants to dentists when he’s not cooking barbecue with his competition team, attends all the MOM clinics.

His trailer has a pit dedicated just to the clinic. Hansel has been traveling with the MOM clinics throughout the state for three years.

Next week, he’ll be in Gastonia; next month, in New Bern.

Hansel recently returned from Houston, where he was part of the Operation Barbecue Relief Disaster Response Team, helping feed people after Hurricane Harvey.

Over 11 days, that team served 371,760 meals in the Houston, Victoria and Silsbee area. One day, Hansel said, the effort produced 60,000 meals in Houston alone.

Operation Barbecue Relief is a nonprofit organization. Hansel said 90 cents of every dollar donated goes to feeding people affected by disasters. The group’s mission in Florida following Hurricane Irma has yet to go fully operational. The real effort will come when evacuees return to their towns and homes, Hansel said.

Hansel brought out his laptop computer and shared many of the photos he took while in Houston. How does he feel after volunteering all those days in Texas?

Patients being helped at Salisbury’s MOM clinic know the feeling.

A long line extended along the sidewalk between the