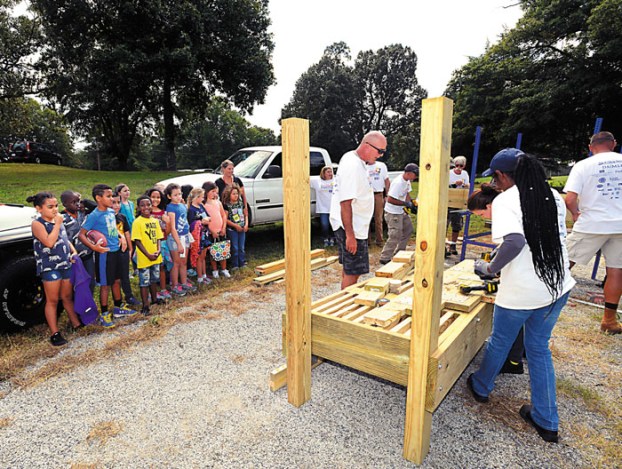 Day of Caring: At Woodleaf Elementary School, Kelly Finney's third-grade class came out the thank the Freightliner volunteers who were working on the new playground equipment. Scott Earnhardt and Tammie Worth Tabor are at work on the right. Wayne Hinshaw/For the Salisbury Post

“I mean, we’ve had a really great day — one of the best we’ve ever had,” Harris said. “From the calls I’ve had today, everybody had a great time and enjoyed working in the schools and the nonprofits.”

Harris said more people participated this year than last. Including those who cooked and cleaned up after the Day of Caring breakfast, there were about 600 volunteers participating, she said.

“We just couldn’t do it without the sponsors and the volunteers,” Harris said.

“Last year was our first year of supporting the Day of Caring and, as an employer here in the area, … we want to be able to give and serve back to the community we work in,” Adelsberger said. “There’s so much going on in the world today, particularly in Florida and Texas. And people can’t always go give their time in those locations. We can make donations, of course, but another piece of it outside the donation piece is giving their time. So our employees are excited to be able to participate.”

Dawn Jones was one of the Agility employees who volunteered. On last year’s Day of Caring, she had just started working at the company, so this was her first year volunteering.

“They said, ‘Go ahead, sign up.’ And I talked to my supervisor and — she actually wanted to sign up as well, but we couldn’t both be out of pocket for the day — so, she said, ‘I know community service is important to you, so you go ahead and go this year,’” Jones said.

Jones said community service is important to her for a lot of reasons but particularly because she wants to set a good example for her children.

“My children both were so proud to hear that I was going to be doing community service and, you know, ‘I hope she comes to my school, I hope she comes to my school.’ And, ‘My friends will think it’s so cool that my mom’s building something that the kids can use,’” Jones said. “So I think it’s important for them to see that, and the only way for them to see that is if we actually do it. And that’s how they’ll learn.”

The two Agility teams built a sun shelter at Saleeby-Fisher YMCA and a fence for Partners in Learning.

Harris said there were 56 sites in total that received assistance on the Day of Caring. The event started at 7:30 a.m. and ran until the day’s projects were completed.

She said some of the other projects included painting restrooms at Rufty-Holmes Senior Center, installing a sign at Capstone Recovery Center and pouring concrete at two elementary schools.

“Part of Day of Caring is it is a team-building event for companies. They do a tremendous amount of team-building. And then, at the schools … it means so much to companies to hear the children say thank you for making our school look nicer,” Harris said. “It’s a win-win.”

The next United Way event will be its first-report meeting at noon Sept. 27 at Ben Mynatt Nissan.

Birthday girls give up presents to help people battered by hurricanes