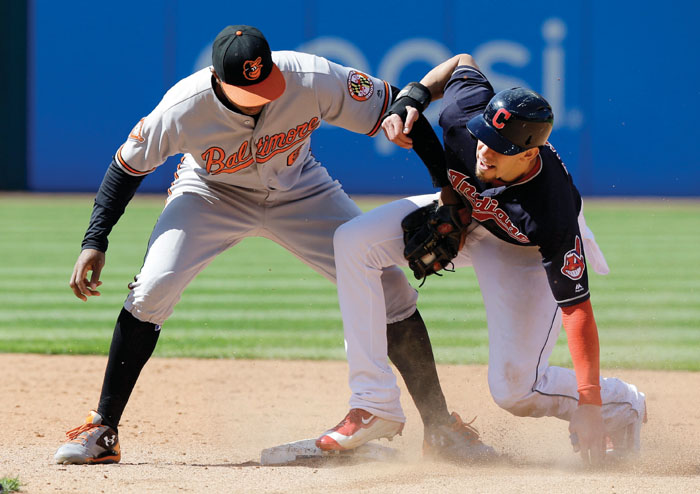 AP Photo/Tony Dejak ... Indians’ Bradley Zimmer, right, slides safely into second base as Baltimore Orioles’ Jonathan Schoop is late with the tag in the sixth inning of Saturday’s game in Cleveland. The Indians won, 4-2, their 17th consecutive victory.

CLEVELAND (AP) — The crowd of 30,459 stood and cheered as Cody Allen fanned Trey Mancini for the final out.

Make it 17 in a row for the Cleveland Indians.

Francisco Lindor homered and Allen finished off another impressive performance for Cleveland’s bullpen, helping the Indians beat the Baltimore Orioles 4-2 on Saturday for their 17th straight victory.

“It’s one of those crazy things where you’re just playing good baseball,” said Allen, who earned his 25th save. “We’re not really thinking about it as much as you guys are.”

Cleveland’s franchise-record streak is the longest in the majors since Oakland won 20 straight in 2002. The longest streak in baseball history belongs to the New York Giants, who had a 26-game run in 1916, according to the Elias Sports Bureau. The Giants’ streak included a tie, which doesn’t count as a game in baseball.

Jay Bruce’s fourth-inning single put the Indians ahead to stay, and Josh Tomlin (9-9) pitched into the sixth to win his fifth consecutive decision.

The Indians haven’t lost since Aug. 23. They have outscored their opponents 118-30 during the streak, but their latest win was a close one.

The Orioles jumped in front on Mancini’s infield hit in the first. It was the first time since Cleveland’s last loss that the Indians didn’t score first.

Tomlin was pulled after Tim Beckham’s 20th homer leading off the sixth. Five relievers then combined for four innings of one-hit ball.

Baltimore rookie Gabriel Ynoa (1-1), making his first start of the season, allowed three runs in 4 2/3 innings. The Orioles were three games out in the wild-card race entering play.

Giovanny Urshela’s third-inning double tied it at 1. Carlos Santana scored on Bruce’s single past a drawn-in infield, and then added an RBI double in the fifth.

Lindor hit his 28th homer in the seventh.

The Indians nearly pulled off two spectacular defensive plays in the first. Urshela, playing second base for the first time in the majors, made a diving stop behind the bag of Manny Machado’s ground ball. Throwing from his back, Urshela nearly got Machado at first.

The Indians went 11-0 on a road trip that ended Thursday. Cleveland extended the streak with a 5-0 win Friday in the opener of a 10-game homestand.

Cleveland slugger Edwin Encarnacion singled in the seventh and has reached base via a hit or walk in 32 consecutive games.

Orioles right fielder Austin Hays made his first big league start, batting ninth and going 0 for 2. A third-round pick in the 2016 draft, Hays hit .329 with 32 homers and 95 RBIs before his promotion from Double-A Bowie.

“I remember there was a day in here a while back and I said something about this could be our time to shine,” manager Terry Francona said. “Guys get chances that maybe wouldn’t of before.”

Baltimore right-hander Jeremy Hellickson makes his eighth start since being acquired from Philadelphia on July 28. He is 2-3 with a 6.87 ERA with the Orioles. Cleveland right-hander Trevor Bauer seeks to extend his career-long winning streak to nine games. He is 0-3 with a 6.75 ERA in four career starts against Baltimore.