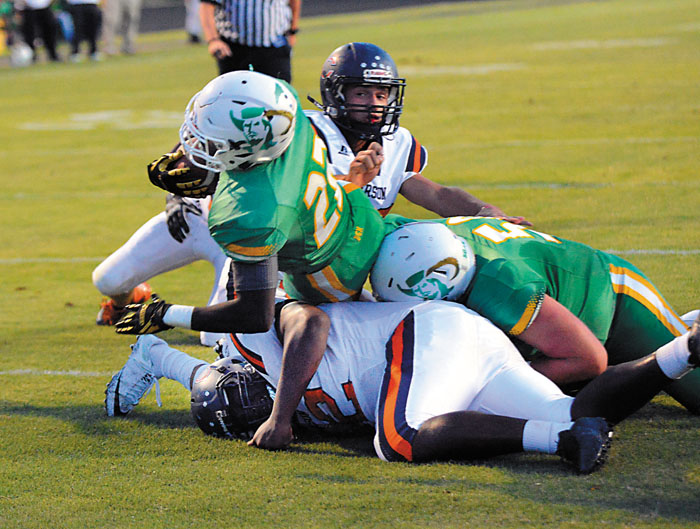 SPENCER — As they have done several times this season already, the North Rowan Cavaliers had to overcome a ragged first half performance Friday night at home.

Yet, as the Cavs have also achieved several times this season, a dominating second half produced a win. This time, it was 37-6 non-conference victory over county rival Carson High at James Carr Eagle Stadium.

In the opening half, North coughed up two fumbles and an interception plus had a long touchdown pass nullified by a penalty. The Cavaliers (3-1) still managed a 14-6 lead over Carson (1-3) at halftime and simply got much better after that. Junior Jaleel Webster rushed for 135 yards and three touchdowns while quarterback Willis Mitchell passed for 200 yards to spark the offensive attack.

“I would have liked it better if I could have scored a touchdown,” said Williams, with a wide grin about the safety, “But our defense did a good job all night. We are an option defense and that is what we focus on most of the time so we were able to step up and stop them tonight.”

The North defense also neutralized Carson’s dual threat quarterback Cole Sifford by holding him to a net 13 yards rushing with seven negative carries and a trio of sacks.

Sifford did connect with receiver Cameron Prugh in the first half for a 31-yard TD strike over the middle. The play cut North’s lead to 7-6 early in the second quarter but it turned out to be the only real offensive bright spot of the game for Carson.

With North playing their second game of the week and only three days in between, it was understandable if they came out a little ragged Friday night. The Cavs were coming off a remarkable and emotionally draining 44-37 win at Lexington this past Monday when they rallied for 31 points in the fourth quarter to win. Still, Coach Ben Hampton would love for his team to break their trend of poor starts.

“We have just got to get better and start playing in the first half of our games,” Hampton said. “Obviously, we have to take care of the football and eliminate some of the penalties that have hurt us including tonight.”

At the same time, Hampton was glad to see the offensive balance displayed in the Carson win with 200 yards passing and 194 yards rushing. “Obviously, we feel like our ground game is our strong suit,” he said. “But we want to be balanced with our throwing as well and Mitchell gave us that tonight.”

North opened the game by marching down to the Carson 16-yard line, but a sack fumble by the Cougars’ Kenny Clarke was recovered by teammate Devin Gay. North did score on their next series but it took an usual break to pull it off. Lined up for a 37-yard field goal try, the snap was low and Cavs kicker Jacob Young alertly scooped up the football and ran 11 yards for the first down. Two plays later, halfback Malcolm Wilson scored from the 2-yard line, making it 7-0.

Carson responded with their best drive of the night covering 66 yards in 11 plays. Sifford threw over the middle in the end zone to receiver Cameron Prugh, who made a diving catch for the score early in the second quarter. The PAT attempt clanged off the left upright, leaving the North lead at 7-6. Then on the next series, Carson seemed to grab some true momentum when Jailen Williams picked off a Mitchell pass at the Cougars’ 39.

But the drive fizzled with a three and out and North then marched 71 yards behind the passing of Mitchell to reach the Carson 16-yard line. Webster then scored the first of his three TDs with a sprint right up the middle to make it 14-6.

“We had our chances,” said Carson coach Joe Pinyan. “It was still anybody’s game at 14-6 and we had a chance to move the ball and score again. But their defensive front is very good and we couldn’t handle them. We played a good team toe to toe, but it just got away from us in the second half.”

North made their defensive statement right out of the gate in the second half when Jaharion Graham picked off a Sifford pass in Carson territory. Four plays later Mitchell read the defense perfectly and kept the ball for a 4-yard TD to make the score 21-6.

Late in the third quarter, the North defense sealed the deal when a sack of Sifford by Jordan Goodine and Wilson forced them to punt from their own 1-yard line. A massive rush by the Cavaliers allowed Williams to break through and block Woodruff’s punt, sending it out of the end zone for a safety.

Two touchdowns in the fourth period by Webster closed out the game. The first came with 7:08 to play then the last came with just 5.5 seconds remaining when Xzavier Davis picked off AJ Jackson’s pass and returned it to the 5-yard line. Webster trotted in from there to make the final score 37-6.

NOTES: North has a bye week coming up and then opens Yadkin Valley 1A conference play the following Friday when North Moore visits. Carson will have to try to bounce back with a rugged non-league game at home next Friday against 4A neighbor Davie County. … The Cougars will be hampered by the apparent loss of their top offensive weapon,  quarterback Sifford, who left the North game early in the fourth period with a leg injury. “He will be alright,” Pinyan said “but we probably won’t have him for a week or so.” Sophomore AJ Jackson filled in at QB after Sifford left the game.