State opens at home, hoping to avoid letdown from loss 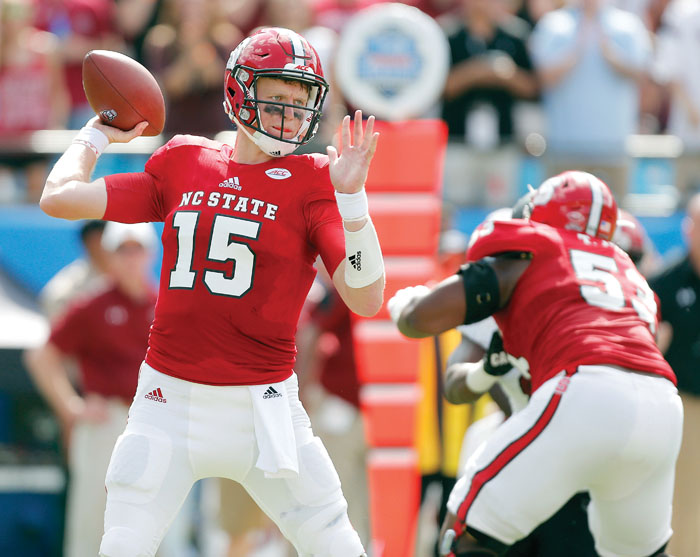 North Carolina State's Ryan Finley (15) aims a pass against the South Carolina defense during the first half of a college football game in Charlotte, N.C., Saturday, Sept. 2, 2017. (AP Photo/Bob Leverone)

RALEIGH (AP) — North Carolina State poured everything into its high-profile opener, only to fall a few yards short.

The challenge for the Wolfpack when they face Marshall on Saturday night: Preventing that season-opening loss from multiplying.

“We learned from last year that we let a game beat us more than once, and that can happen with success and failure,” coach Dave Doeren said. “That’s part of growing up. You’ve got to learn how to handle both. Now that we’re into the season, it’s five days of prep, and play. … I think that’s the best part of what’s going on.”

Doeren hopes this year’s Wolfpack (0-1) are more mature than the group a year ago that came a field goal shy of upsetting eventual national champion Clemson. N.C. State followed that loss with a couple of no-show performances — a blowout loss at Louisville, then a home defeat against a Boston College team that hadn’t won a conference game on the road since 2014.

The current challenge is to keep that from happening again, after the Wolfpack lost 35-28 to South Carolina despite outgaining the Gamecocks 504-246. N.C. State had the ball inside the 10-yard line in the final minutes but failed to score.

The Thundering Herd (1-0) might have enough big-play capability to keep things interesting.

Marshall is coming off a 31-26 victory over Miami of Ohio in which Keion Davis returned two kickoffs for touchdowns, Chris Jackson added a 72-yard interception return for a score and the Herd swatted away a game-ending Hail Mary attempt to seal it.

Under Doc Holliday, the Herd have earned wins over power-conference programs Purdue, Maryland and Louisville, and that track record has them believing they can beat the Wolfpack.

“We’ll never go into a game that we don’t expect and have the opportunity to win the game,” Holliday said.

RUNNING OF THE WOLVES: N.C. State needs to get its ground game started , after rushing for just 89 yards against the Gamecocks. Nyheim Himes had 81 yards but the rest of the team combined for just eight. The Wolfpack struggled to replace graduated 1,000-yard rusher Matt Dayes. Doeren says subbing mobile backup Jalan McClendon for pocket-passer Ryan Finley won’t solve anything. “I don’t think the struggles in the run game will be fixed if you put somebody else in at quarterback,” Doeren said. “It all starts with how you block. We’ve got to do a better job … just getting rid of those negative plays.  … We just need to get better at what we do.”

FINLEY’S ARM: Finley set a school record with 45 completions in the South Carolina loss, throwing for 415 yards with two touchdowns. Fifteen of those completions went to do-it-all threat Jaylen Samuel, who became the first N.C. State player since Torry Holt in 1998 with that many in a game.

WELCOME BACK, DOC: Holliday was on Chuck Amato’s staff at N.C. State from 2000-04, serving as assistant head coach and coaching the Wolfpack’s receivers. Among the players he helped develop were Jerricho Cotchery and Koren Robinson. Holliday downplayed his return to Carter-Finley Stadium, saying “once the whistle blows, it’s between the lines.”

SERIES RECORD: This is the first meeting between the teams since Marshall joined the FBS in 1997, though the Herd made three visits here in the 1990s when they were in what was then called Division I-AA. N.C. State won all three, but two of those came by seven or fewer points.

Humbling loss behind them, Patriots poised to correct issues