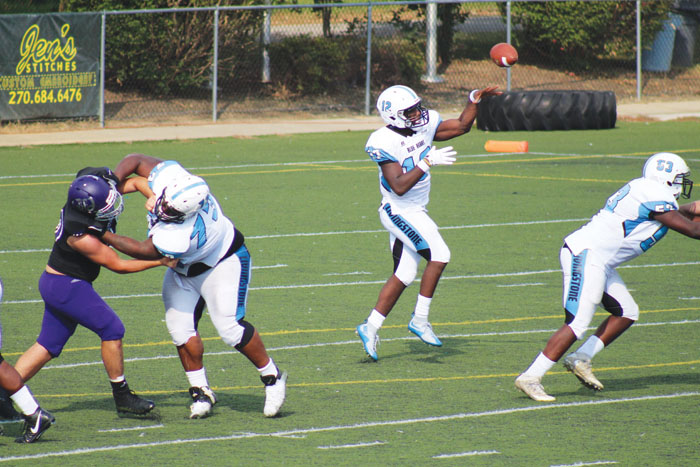 OWENSBORO, Ky. — Livingstone’s nine-hour bus ride to Kentucky Wesleyan did not pay off in the form of a victory here Saturday afternoon, as the Blue Bears fell, 33-13.

Kentucky Wesleyan posted its first win of the season on Saturday as the Panthers rolled up 341 yards of total offense to improve to 1-1 on the season. The Blue Bears fell to 0-2.

Kentucky Wesleyan’s offense got off to a hot start with a 40-yard kickoff return by Jared Beard, followed by a 29-yard pass completion from quarterback Mike McGee to Ladarrius Dunn. It set up a 41-yard field goal by kicker Chris Logsdon for a quick 3-0 lead.

Coach Daryl Williams’ Blue Bears then went on an 11-play, 53-yard drive to go ahead, 7-3, with 2:40 left in the first quarter. Junior running back Art’Kevious Nelson scored on a 6-yard run in his first game for Livingstone. Kicker John Jones added the extra point.

McGee connected with Dunn to start the second quarter, this time good for a 18-yard touchdown.  Logsdon’s extra attempt was good to help the Panthers regain a 10-7 lead.

On Logsdon’s ensuing kickoff, Martavious Carter’s tackle pinned the Blue Bears at their own 12-yard line.  A few plays later, Jonathan Dooley broke thru the offensive line to make a tackle in the end zone, a safety for Kentucky Wesleyan.

Kentucky Wesleyan scored a pair of touchdowns in the third quarter, jumping out to a 33-7 lead.  The Panthers moved 42 yards in just under three minutes with McGee capping off the drive with another TD pass — this one to Ahmad Mitchell from 5 yards out.

During Livingstone’s ensuing drive, Myles Walker forced a fumble at midfield that was scooped up and returned by KWC’s Devyn Bledsoe for 53 yards and a touchdown. Suddenly, it was 33-7.

Livingstone quarterback Thaddeus Bell, who had a good day statistically, led the Blue Bears to a touchdown on their last drive of the game. Bell had a 23-yard scramble down the right sideline, setting the TD. Nelson scored again on a 6-yard drive with just 18 seconds remaining.

Bell started at quarterback after last week’s starter, Xavier Longerbeam, another sophomore, suffered a concussion in the opener at Benedict.

McGee finished with 20 completions for 255 yards and three touchdowns. Mitchell led the Panthers in rushing with 39 yards on seven carries and Corey Johnson added 37 on seven attempts.

Dunn led all receivers with 88 yards on five catches.

Defensive end Dalan Cofer led KWC with nine tackles, five of which were solo. The Panthers’ defense forced three fumbles while holding the Bears to 259 yards of total offense.

NOTES: Livingstone will play a level up next Saturday, traveling to FCS member Hampton University for a 6 p.m. game. Kentucky Wesleyan will head to Kentucky State next Saturday, taking on the Thorobreds at 12:30 p.m. (CST).