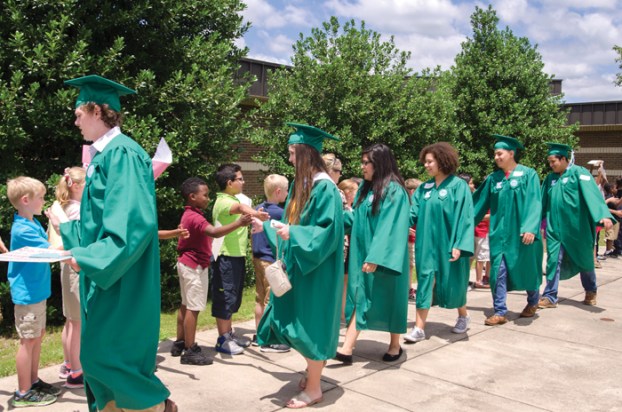 Students from Forest Park Elementary School hold signs and give high fives to the Seniors from A.L. Brown as they walk throughout the school on Thursday. Salisbury Post

I remember a few years back trying to teach a class of sophomores about the phrase “alma mater.” Most of the students were thinking, “Alma what?”

I explained to them that most schools have a fight song as well as an alma mater, which is their school hymn. (A number of them didn’t know what a hymn was either. So —where was I to begin?)

I told them that the Latin phrase “alma mater” is sometimes translated as “nourishing mother,” conveying the idea of a school being the “mother” of a school family. They seemed to follow the idea so I then asked if anyone knew their school alma mater. No one did.

That made me sad because I could still remember the words to that same alma mater after having played and sung it in the high school band after every football game when I had been their age. At the time I had no idea that I would never forget those words, even though they seemed somewhat corny and archaic to my teenage mind.

Singing the alma mater was a long standing tradition in Kannapolis on Friday nights in the fall. It seemed to unite us as we remained in the stands, following a win or a loss, to share a common bond of friendship and family in our tightly knit community.

For some reason that tradition stopped somewhere along the way. Kids didn’t know about the alma mater because no one was singing it or playing it anymore.

Ironically, I unintentionally found a framed copy of the original score of the lyrics and music hidden in the corner of a remote book room the first year I returned to teach at my alma mater. I was shocked to see this piece of our history lying forgotten and covered with a thick layer of dust. How it ended up there I’ll never know. I’m sure it was an accident or an oversight but I’m glad I saw it.

Thankfully it now hangs in a prominent place in the band room.

At our first home game this year, the football team made their way over to the stands immediately after the game had ended to sing the alma mater with the cheerleaders while the band reverently played the nostalgic tune. Watching them pay tribute to the memory and proud heritage of their school brought tears to the eyes of many who remembered it.

What also made this extra poignant was that we had just lost the game. Singing after a loss is much like trying to sing at a funeral. But watching those kids join arms and sing made me proud.

Teenagers are incredible human beings sometimes. This was the youth of America at its best. It made me forget about North Korea, domestic terrorists in our own country  and impending hurricanes. Their singing reminded me that we have hope because we are part of something much larger than ourselves.

Anyone who has been to a college football game and heard the familiar strains of their alma mater knows the feeling you have during those sacred moments. In fact, you don’t even have to be part of the alumni base to have your heart touched.

The first time I heard the “Eyes of Texas” played at a University of Texas football game in the Cotton Bowl in Dallas, I momentarily believed that the “eyes of Texas were (really) upon me till Gabriel blows his horn.” It was mystical, if not worshipful.

They cannot possibly know that the traditions they are keeping alive today will become a part of their lives which will forever keep them young in their hearts.

“Hail our alma mater…” is a phrase which will always remind them of how special their years are with high school and college friends. They are part of a family — not only a family that grows larger each year with added alumni, but also a family that becomes more diverse as it includes entirely new generations of students from entirely different backgrounds.

And that is truly something to sing about.

Letter: COLAs are vital to retirees

As a federal retiree who has served our country for years, I am deeply concerned with a provision in the... read more