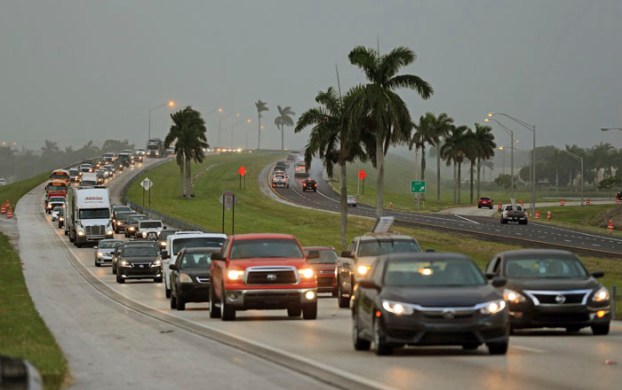 Traffic is seen heading North along the Florida Turnpike near Homestead, Fla., as tourists in the Florida Keys leave town on Wednesday, Sept. 6, 2017. Heavy rain and 185-mph winds lashed the Virgin Islands and Puerto Rico's northeast coast Wednesday as Hurricane Irma roared through Caribbean islands on its way to a possible hit on South Florida. (Al Diaz/Miami Herald via AP)

What would you need to survive for 14 days?

We were putting together an emergency plan for the news staff last week when the subject of food came up.

If Hurricane Irma affected Rowan the same way Hugo did in 1989, most of the county could be without power for a while. The Salisbury Post and other downtown buildings might still have power, though, because of the underground grid that serves the area.

In that case, the newsroom could still produce a paper full of news about the storm and information people need to know, but we might get stuck here at the Post for awhile. What should we have on hand to eat, I asked reporters.

Ramen noodles, one person suggested. Campbell’s soup, said another. Chocolate came up, as well as fruit. And water, of course.

Then I remembered the survival kit sitting on my bookshelf. When it comes to bare necessities, the people who put together Surviv-All kits may have been the experts of their day.

The box surfaced when someone was cleaning out a remote part of the Post’s basement — a part that had been designated as a fallout shelter decades ago.

The shelter was loaded with red-and-white boxes labeled “Emergency-Pak Food and Water.” Inside, according to the label, was enough food and water to take care of one person for 14 days.

All the boxes went into the trash except the one I carried up to my office — a historic artifact.

Keep in mind, these kits come from an era when the nation was prepping for fallout from nuclear bombs.

Here’s what the box contains:

• One empty mixing can.

• One utility container holding a can opener, a measuring spoon and 14 vitamin C tablets.

• One 4.5-pound can of Multi-Purpose Food, MPF for short, a powdered blend of protein, vitamins and minerals made by General Mills. This is why the utility container has a measuring spoon. “Take three heaping measures hot or cold, wet or dry three times daily,” the instructions say.

Scientists created the MPF powder in 1950 as a way to attack world hunger. The concentrated protein supplement could be eaten as is or mixed into other food. Providing nourishment for people in fallout shelters was secondary.

With the MPF, water and vitamin C tablets, the Emergency-Pak met minimum specifications set by the U.S. Office of Civil and Defense Mobilization.

That’s fine, but what was supposed to happen after 14 days?

By then, the radioactivity left behind by a nuclear explosion would have decayed to a level that might be safe — at least safer than it was immediately after the blast.

Wise suggestions for emergency provisions came up when I asked Facebook friends what they would pack.

Canned goods, dried fruit, cereal and granola bars were a given. Don’t forget the beef jerky.

Peanut butter came up repeatedly, as did chocolate. Then Denise Kyger came up with the perfect solution: peanut M&Ms.

College friend John Blake of Chadbourn suggested “tickets out of the area” to escape the storm.

He thought about it awhile longer and came up with another idea: “Fruitcake. Have to have it. It will not spoil and if the hurricane changes course, regift it during the holidays. Just saying.”

Brilliant. Who knows? There may be fruitcake sitting in a forgotten fallout shelter, even as we speak.

I remember a few years back trying to teach a class of sophomores about the phrase “alma mater.” Most of... read more