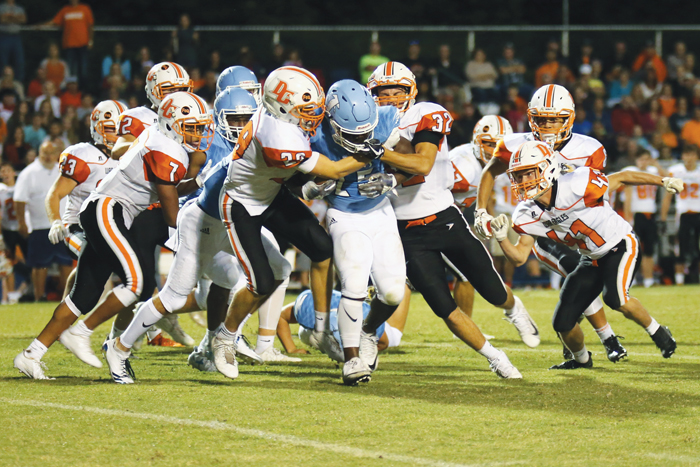 MOUNT ULLA — Turn off the search lights and call back the hounds. The Davie County football team has found what it was looking for.

After three weeks of doing very little to excite anyone about their missing offense, the War Eagles rediscovered the end zone Friday night in a 42-20 non-league victory at West Rowan.

“We finally started doing what we’re supposed to be doing,” senior quarterback Josh Hall said after passing for 246 yards and three second-half touchdowns. “We started playing with an edge.”

They did, but not until Davie (2-2) did a 180-degree turnaround after falling behind 14-0 in the first nine minutes. West Rowan’s offensive line was in command in the early going, helping quarterback Payne Stolsworth complete a pair of identical TD passes to high-octane flanker Jalen Houston.

“We went up 14-0, but they responded very well,” West coach Joe Nixon said after the Falcons dropped to 1-2. “We were executing, making some big plays, but we knew it wouldn’t be over with when we got to 14. We knew Davie would do something.”

The guests came to life after seeming almost lifeless, beginning in the second quarter. They drove 84 yards on a 15-pay scoring drive that consumed more than six minutes, pulling within 14-7 on Peyton Hampton’s one-yard slam up the middle. A Skyler Schoppe field goal trimmed the deficit to four points before Davie’s opportunistic special teams gave the War Eagles their first lead.

“I’ll be honest. I don’t know if it was the potatoes and dried chicken we had pre-game, but something worked for us tonight,” safety Broc Barnette said after blocking a punt and recovering it in the end zone with 11.3 seconds remaining in the first half. “They may have been a little jittery because they were so close to the goal line. But we had a block play on, so we were going for it. I was on the outside and just came in free.”

Barnette’s play gave Davie a 16-14 halftime lead and may have crushed West’s soul. “I don’t know,” junior linebacker Daniel Durham said in the quiet Falcons’ locker room. “It didn’t seem like we were playing as a team. When we got the early lead, everyone thought the game was over, that they were just going to die. We couldn’t handle it when they came back.”

The Davie lead grew to 18-14 when a punt was blocked out of the end zone midway through the third period, then to 25-14 following a costly fumble by West’s punt return team.

“We started focusing on our technique and playing our technique,” said winning coach Tim Devericks. “We were trying to crawl our way back and get ourselves into striking distance.”

“The coaches have been on me about not being very confident,” said Hall, who passed for 169 yards in Davie’s first three games. “They told me to stop wishing the ball would go to a certain area or spot and making it go there instead. It finally worked.”

Not to be overlooked was another productive night for Stolsworth and Houston. The two have become Rowan County’s hottest couple after connecting six times for 155 yards. Houston scored all three West touchdowns, the last when he turned a left-side screen into an 82-yard TD sprint down the sideline with 9:38 to play.

“You know, their first two possessions our defensive backs were not getting back in coverage,” Barnette said. “We got it figured out at halftime and stuck to it the whole second half. We figured as long as they don’t score, we can win.”

West produced enough offense to prevail (246 total yards), but suffered three turnovers, netted only four yards rushing in the second half and was penalized nine times for 100 yards. Davie had 349 yards offense while its defense limited the Falcons to six first downs — four in the opening quarter and two in the last.

“We just got outplayed,” Nixon concluded. “They’ve got to execute better and I’ve got to do a better job coaching. Hopefully we all learn from our mistakes and get better.”

NOTES: Barnette also intercepted a pass in the fourth quarter. … West opened the game by scoring twice on short-field drives — the first from 40 yards and the second from 46. … Stolsworth passed for 205 yards but the Falcons finished with just 41 yards rushing. … Davie visits Carson and West hosts A.L. Brown next Friday.