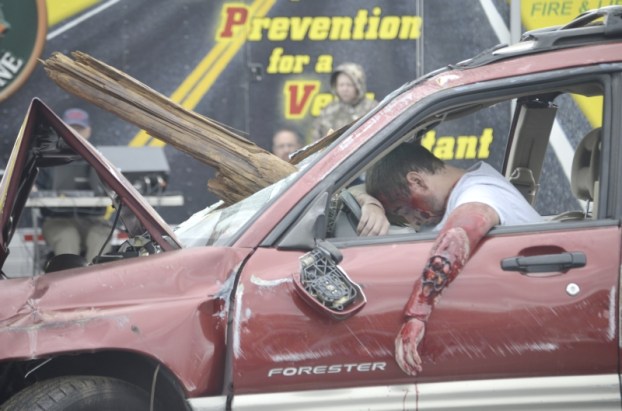 An actor portrays a teen who died in a car crash while speeding. The dramatization was part of a safe driving awareness program at East Rowan High School in March. Shavonne Walker/Salisbury Post

One easy, inexpensive and effective way to save thousands of lives every year would be to equip American highways and city streets with speed cameras. Unfortunately, this would also be an easy way to enrage a great many drivers — which is why the idea has been so slow to catch on. What can be done to break this deadly impasse?

The main thing is to educate drivers about the dangers of excessive speed: These are much greater than generally believed.

Speed is a factor in 31 percent of fatal crashes — as big a problem as drunk driving, though not nearly as much condemned. And dozens of studies have found that cameras reduce crashes significantly, especially fatal ones. This is why the National Transportation Safety Board now recommends them.

Yet most states don’t use them. Seven have gone so far as to outlaw them; 15 more limit their use — for example, by restricting them to school zones or requiring that a police officer be present. South Carolina allows the cameras only in the event of a declared state of emergency.

Why such resistance? Some argue that speed cameras violate people’s privacy or right to due process, though courts have found them to be constitutional. Cameras have been misused: Baltimore’s program had to be shut down after a newspaper investigation revealed that speeding tickets had been issued to stopped cars. When private companies operating the cameras are given a share of the fines — the “bounty system” — drivers may suspect that the goal is to make money, not keep them safe. That suspicion may be strengthened when drivers get no warning that cameras are operating.

To overcome these doubts, governments at every level should publicize the dangers of speeding, as they have raised alarms over the risks of drunk driving and failure to use seat belts. The message is simple enough: The faster a car is traveling, the longer it takes to stop. And the greater the speed on impact, the greater the potential harm. A pedestrian struck by a car traveling at 25 miles an hour dies 12 percent of the time; when the car is going 40, the death rate rises to 45 percent.

Limits also need to be smarter — better reflecting road conditions, the history of crashes in an area, the placing of intersections and other safety-related criteria. In many cases, limits should be lowered; in some, maybe, they can safely be raised. But the more they seem to make sense, the more support there will be for stricter enforcement.

Clear signs announcing cameras in use would help, making the system seem fairer and themselves discouraging speeding. Point-to-point cameras, used in Europe and Australia, could be useful: These measure a driver’s average speed over a given distance rather than at just one moment.

Smarter limits that drivers more readily understand, plus enforcement that’s stricter and fairer, could save thousands of lives a year. Done right, speed cameras are not the enemy, but the driver’s best friend.

Criticism comes easy, but implementing a solution to Salisbury’s gun violence — a more productive task — is as complicated... read more