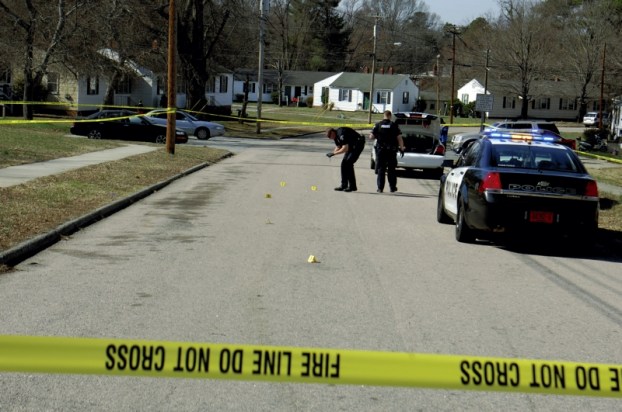 Salisbury Police mark and document evidence in the street related to an early-afternoon drive-by shooting in February in the 700 block of Victory Street. Two men, reportedly sitting on a porch at 707 Victory St. were wounded, but their injuries were not life-threatening, Police Chief Jerry Stokes said. Mark Wineka/Salisbury Post

Criticism comes easy, but implementing a solution to Salisbury’s gun violence — a more productive task — is as complicated as the issue itself.

As Salisbury enters the 2017 City Council campaign, candidates may say crime is a serious problem. Perhaps, candidates will tout a plan to curb gun violence. That’s fine, but it’s important for candidates to state exactly how they, as elected officials, would help.

When necessary, the City Council can also allocate funding to specific projects. Fibrant is an example of such a project. It was intended to have a major effect on the city’s economy.

At times, council members also can use their position to advocate for a cause or motivate people to action.

It’s possible for the City Council to affect crime rates, but the solution is more complicated than a single vote. Allocating more money to the Salisbury Police Department in the form of raises or new initiatives — as the council has done this year — may help stem the tide of violence indirectly, but it won’t completely reverse the problem.

Crime involves issues such as poverty, education and job availability. A quality public education system that feeds qualified job candidates into a healthy local economy reduces the attractiveness of crime and gangs. When students can obtain jobs with a livable wage immediately after high school or community college, the opportunity cost of joining a gang, hopefully, will be too high.

City Council candidates need to understand the problem before preaching about Salisbury’s crime. It’s not as simple as guns and gangs.

During a Monday news conference, Salisbury Police Chief Jerry Stokes provided some facts about the state of crime in the city: Violent crime is down 4.6 percent as compared to last year and some areas see more crime than others. That’s good news, but it’s important for the city to reduce or eliminate the frequency of crime in areas such as Salisbury’s West End, too.

Another fact: People between the ages of 15 and 24 are most likely to be affected by gun violence as opposed to other forms of violence, according to the National Institute of Justice.

City Council candidates and voters should realize elected officials alone cannot stop crime. They can create an environment in which change can happen, but people affected by and committing acts of crime need to be involved in stemming the tide of gun violence.

We’ve yet to hear every council candidate address the issue of gun violence in a public setting. When that happens, all Salisbury residents should pay attention.

Civil rights and wrongs: Reflections on issues of race, politics and history

Editor’s note: This is a shortened version of a talk Michael Bitzer, professor of politics and history at Catawba College,... read more