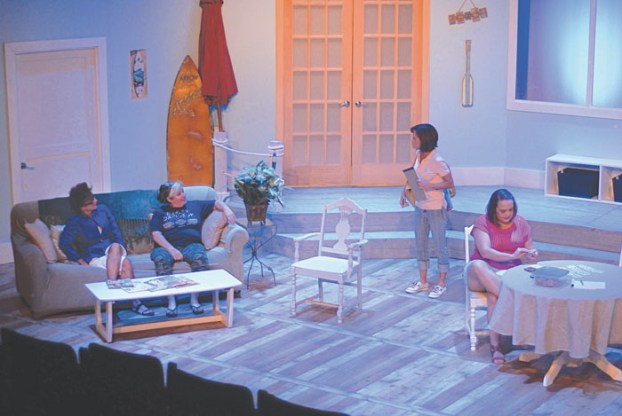 Dive into a fun night with ‘The Dixie Swim Club’

The overwhelming number of women in the opening night audience for “The Dixie Swim Club” at Lee Street theatre laughed a lot and applauded spontaneously.

This late-summer comedy is full of easy laughs, many of which Tamara Sheffield delivers with a straight face. And it’s full of those moments when you’ll remember friends and think, “Those were the good old days.”

“Dixie Swim Club” is about a group of women who were all on the swim team at a fictional North Carolina university in the 1980s. After graduation, they gather on the same weekend in August every year at a cottage on the Outer Banks to reminisce, drink martinis, gossip and take group swims. They toast each other and chant the mantra from their swim team.

Each character is distinctly different, and that goes beyond physical appearance. The five women in the cast create believable personas, women who will remind some of us of someone in our pasts.

There’s Sheree, the organizer and health food nut, played by the endearing Winnie Mikkelson. Robin Rogers is the no-nonsense, time-for-a-drink lawyer Dinah, who always seems to have her act together.

Marnie Stoker is the self-centered, oft-divorced Lexie, always on the hunt for her next man and her next plastic surgery. Sheffield is the long-suffering Vernadette, with a lazy husband and two wayward children, one a criminal and the other a serial cult member.

When the fifth member of the group, Jeri Neal, shows up, the rest are stunned. Melissa Bowden plays the former nun who is suddenly eight months pregnant, 22 years after graduation.

After that initial shock come various revelations from the other women. Vernadette’s arm is in a sling, so there’s that mishap to review. This will become her running gag. Every time she comes for their weekend, she has a different injury, but always, the minute she arrives, she runs to the bathroom. Yet Vernadette has the most infectious attitude and never feels sorry for herself.

Lexie’s routine is to have a new hairstyle and color and a new divorce. Sheree’s gag is she makes the most unappetizing appetizers, with foods no one wants to eat, no matter how healthy they are.

In the second act, it’s five years later, and Jeri Neal really needs a break after spending all her time chasing after her extremely active son. She’s trying to find a job, too, and her outfits range from frumpy to frightful.

Jeri Neal is the most positive one, always finding a bright side. Eventually she finds someone who loves her and makes her life complete.

But as with all friends, there are tensions, and nerves are on edge as they face the prospect of aging. Sheree is acting weird and lashes out at Lexie for being so self-centered. Lexie bites back at Dinah for dating one of her ex-husbands. Vernadette eggs them on because the drama is entertaining, until one of them goes too far.

Can the friends recover from this tempest? And what will they do about the tempest outside, an approaching hurricane?

It’s the quiet moments that tell so much about friendships, and there’s plenty of support and solidarity here, too. The friends can still surprise each other.

The final scene has the friends gathered one last time at the cottage, which is about to be torn down. They are in their 70s now, and one of them is gone. Another is losing her memory, and surprising alliances have been formed.

This most poignant part of the play surely brought tears to the eyes of some in the audience as they watched the friends coping with the challenges of aging. The final moment is particularly touching.

But overall, this is fun, and it’s full of the Southern female characters we know or read about. They are strong and silly, funny, profane, settled and reaching, but always relying on each other and their unbreakable bond.

Kindra Steenerson directed this cohesive cast, no doubt with memories of her own friends. Chris Speer designed the lighting and the simple set.

Treat yourself and a friend or two to a night with this bunch.