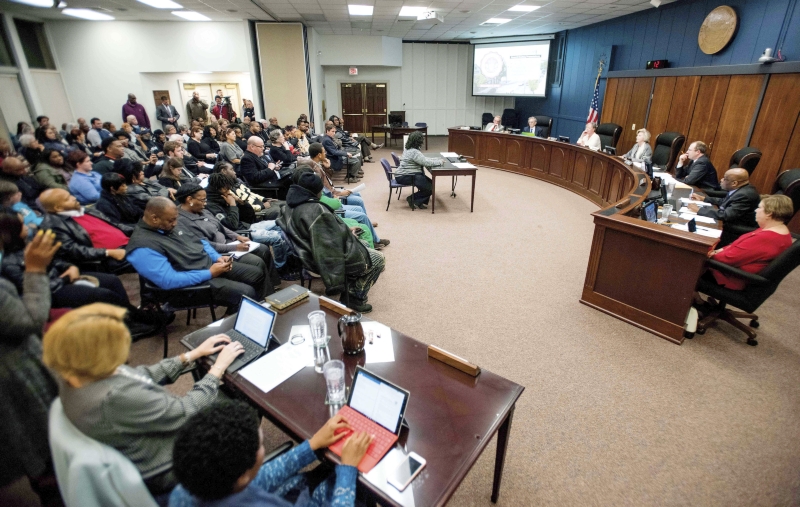 Salisbury City Hall was filled with concerned citizens in early December 2016 who wanted to talk about shootings in the city. JON C. LAKEY / SALISBURY POST

The video of Salisbury City Council shutting down public comment from Carolyn Logan at an Aug. 15 meeting is not material for a democracy-in-action tutorial. In the video, Mayor Karen Alexander says Logan is out of order and literally shushes her as Logan repeatedly objects and interjects. It’s obvious the council doesn’t want to hear what Logan has to say. She decides to exit the meeting before a police officer can escort her out.

Logan, a resident of East Spencer who has property in Salisbury, has made it her job to speak at virtually every City Council meeting this year, repeatedly calling the council out on crime, violence and other issues. The frequency and tenor of Logan’s comments may undermine her cause, but she has every right to speak.

As others have said, the optics of the Aug. 15 incident are bad for the mayor and council. They appear much more interested in silencing Logan than hearing what she had to say. That’s not the way democracy is supposed to work. If the people who view that video could see the dozens of Logan’s public comment appearances that preceded Aug. 15, they might understand the council’s frustration, but the exchange is still unseemly.

Ms. Logan is not alone, nor is Salisbury City Council. In an era of political discord and confrontation, elected leaders from the Landis Board of Aldermen to the N.C. General Assembly and Congress have struggled with how to deal with persistent dissent and protest. It’s one thing to hear out a citizen who wants to express an opinion on a pertinent issue, but when people take every opportunity to verbally flog a board or official, where should public officials draw the line? Or should they even try?

Candidates for Salisbury City Council and other municipal boards should address the public-comment issue, though this is one of those matters that are easier to hypothesize about than actually deal with. It is officials’ duty to listen to all citizens’ concerns; this is a democracy, after all. But, Mr. or Mrs. Candidate, how would you deal with people who address the board meeting after meeting, sometimes with raised voices and accusatory tones, while suggesting you are apathetic, negligent or even criminal? Members of Congress may be able to opt out of town hall meetings, but public comment is an important part of local board meetings.

That’s part of serving in public office — you have to be willing to take the heat and treat constituents with respect, even if they don’t return the favor. In the end, it’s the mayor’s responsibility to run council meetings in an efficient, orderly and respectful manner. That did not happen at Salisbury City Council on Aug. 15.