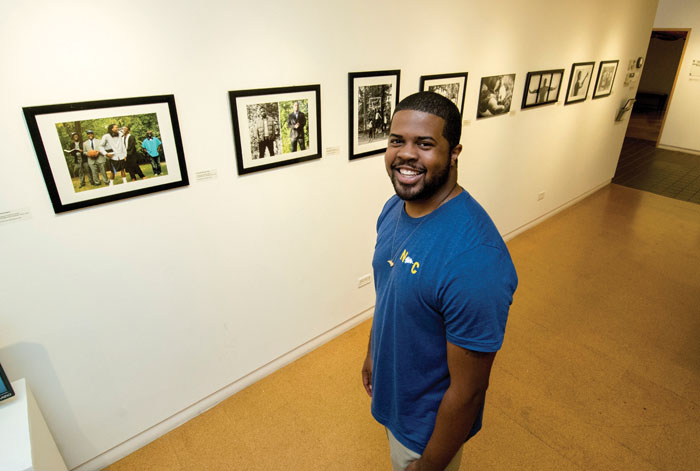 Jonathan Smith of Durham stands by a series of images inspired by a poem that he and his mother Carla Smith wrote that was based on Nikki Giovanni's Ego Tripping. The photo series hanging at WaterWorks is titled Young Black Men Ego-Trippin’. Jonathan Smith is one of the models in some of the images. JON C. LAKEY / SALISBURY POST

SALISBURY — When Jonathan Smith was in 7th grade he needed a talent for a church program, but when he couldn’t come up with one he and his mother, Carla, decided to turn the popular poem Ego Tripping by Nikki Giovanni on its head. Mother and son rewrote the free verse poem instead using themes to encourage young black men.

Carla, a poet in her own right, and an educator has since used that rewritten poem as a tool to educate youth and adults about systemic racism, stereotypes and discrimination. In 2014, Jonathan and Carla along with her other son, Cameron and their friends had an idea to create a photo series using images from their poem. The Smiths are Salisbury natives.

Today that photo series and an accompanying video are on display at Waterworks Visual Arts Center through Sept. 1. The photographs were taken by Chapel Hill resident Anneca Raines. Raines, a Smith family friend helped bring the poem to life with a number of black and white photos and color prints.

The photos are set to music and Cameron Smith can be heard reciting the poem for a video Carla created.

Jonathan said he and his mother actually wrote the poem in the car.

Carla was working in the community hoping to get to the heart of equity and education, engagement and empowerment.

“When I speak to groups I use the poem as a catalyst for conversation,” she said. “It’s about creating a counter narrative for our youth.”

The pictures were shot mostly in one day at the Center for Creative Leadership in Greensboro where Carla’s husband works.

“I never understood the impact of what we were writing,” Jonathan said.

He said he believes why their poem and the photos strike a cord with people is because they can relate to it.

Jonathan said the photo series shows others they can do it all and succeed. He said it also shows that young black men can be in the company of each other, laugh and find solace in each other.

Carla had always wanted to make their poem into a photo book. Both mother and son never imagined their poem and photos would be apart of a gallery exhibit.

Poet Nikki Giovanni published the poem in 1972 the same year she made her first trip to Africa. She wrote the poem for girls as a way to let them know they were wonderful. In her poem she wrote about being born in the Congo and recounts images of earth’s great resources including minerals and diamonds.

Smith and his mother wrote their poem and used the subsequent photos as a way to dispel various stereotypes about African-American men. The photos feature brothers Cameron and Jonathan Smith, their cousins Brandon Johnson and Reggie Bowman as well as friends David Cunningham and Julius Graham.

The pictures show the men as business professionals and college graduates. The images also show a picture of Jonathan Smith with the middle passage “tattooed” on his back. They used a Sharpie and glue to simulate a tattoo showing the passage that slave ships traveled from West Africa to the West Indies.

Mother and son presented the poem as a educational component for a workshop through the Peace Circle, a group who meet the first Tuesday of the month at Mean Mug coffee shop where they have open dialogue about social issues that impact the local community.

Tonya Cross, who created the Peace Circle, had previously worked with Waterworks on another exhibit and presented the photo series in 2015 to Executive Director Anne Scott Clement and the gallery’s education director.

Cross said they had to get approval from the board, who gave approval, but the gallery was booked through the early part of this year. The photo series began on exhibit in June.

“The photo series is a true reflection of black life in America. It addresses numerous stereotypes and false perceptions faced by young black men. For example, being labeled a “thug” simply because of the color of your skin and/or attire,” Cross said.

She said she was very impressed with Carla and Jonathan Smith’s creative new spin on the poem from the young black male’s perspective.

“For me it gave voice to those who daily experience the impact of systemic racism, discrimination, and stereotypes,” Cross said.

“I’m a conversationalist, so my hopes is that the exhibit will generate some open and honest dialogue about the social, cultural, and racial divides that exists in our local community. With genuine conversation there should also be some resolve or a call to action; effective engagement is the portal to next steps forward,” Cross said.

Both of Raines’ parents were photography lovers and growing up around it was part of her every day life. She was always considered different as a child and she struggled as an adolescent, but she found that through photography she could tell her story.

She attended the Art Institute in Durham and it was there that she realized she wanted to tell meaningful stories with her photographs.

Raines said it was an easy project and she was glad that she could make Carla Smith’s dreams a reality.

Waterworks is Raines’ first long standing gallery series, but she also has works displayed in several model homes in the  Durham, Raleigh and Pittsboro areas. She’s also done two showcases, one at RAW Artists in Raleigh and the other at West Elm in Durham.

Once the exhibit is over Jonathan will continue the work he does with youth at Duke Youth Programs through Duke University where he conducts academic enrichment programs through music, art and coaching. Raines hopes to merge into photography full time. The participants in the photo series are each on successful career paths, Carla said, including her son Cameron who is in graduate school and some of the others who are educators, work with youth.

“The exhibit is such a dream come true. I am so thankful for everyone who was involved in making it a success,” Raines said.
Waterworks is located at 123 E. Liberty St. and is open from 10 a.m. to 5 p.m. Monday through Friday and from 10 a.m. to 2 p.m. on Saturday. There is no charge to tour the galleries.
Contact reporter Shavonne Walker at 704-797-4253.