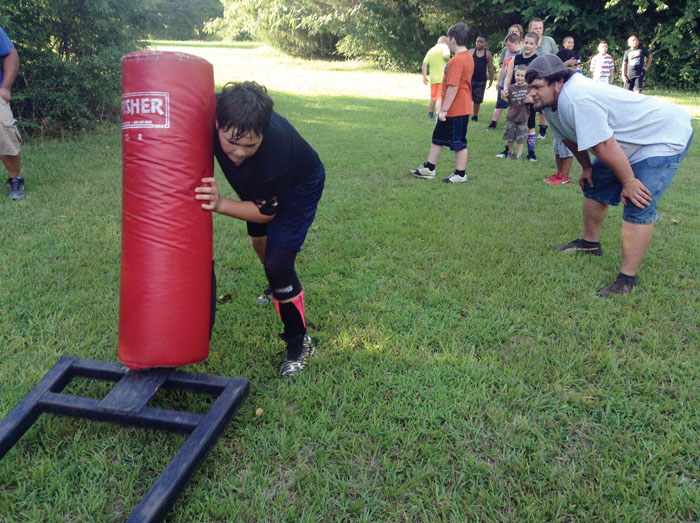 SALISBURY — Martin Rogers played football for the West Rowan Falcons and loved the game. After high school, he joined a team that played against former players from Northwest Cabarrus, Mooresville and South Rowan high schools. For a time, that competition filled his need for football.

After his two sons were born, Rogers wanted to teach them to play football the right way in hopes that they would understand his love for the game. He began to work with his boys, Blake and Brandon, now 12 and 10. Rogers got them out in the back yard and worked on their conditioning and understanding of fundamentals.

That first backyard session was three years ago on a warm summer afternoon, just about a month before Youth Football League practice would begin. Joined quickly by former high school coach Don Treadaway and former player Dean Athey, Rogers included the men as coaches and their sons in the workouts.

Word spread and others joined in. On Tuesday, 35 players and eight coaches participated in high-energy drills during a two-hour practice on a shaded field just off Barringer Road. Mike Trexler allows use of the field.

Rogers and Jesse Moore head the coaching staff for the “Back Yard Boys.” Nearly all the boys are between ages 6 and 12.

“We have at least one boy out here today who is younger and usually have a couple who have aged out but want to come back and do the drills,” Rogers says.

Many of the coaches, including Rogers and Moore, also coach with the YFL, yet the camp is not affiliated with that organization.

“There are no affordable camps around our area for boys of this age,” Rogers said. “One-day camps are sometimes offered, but the boys need more than that. Our camp is open to boys from all areas and it is free.”

The Back Yard Boys football camp is funded by donations and concession sales at the practices.

“A lot of the equipment that we use has been donated or Martin has bought it,” Moore said. “The boys don’t practice in pads, helmets or football uniforms but we have a blocking sled and plenty of things that make our speed and agility drills more doable.”

Rogers added, “We aren’t trying to pick positions for players, and 90 percent of our practices are without footballs since our focus is on conditioning and fundamentals.”

All the boys get shirts and dog tags with the Back Yard Boys logo. The group One Child at a Time has donated money for equipment and league fees for those who can’t afford to play.

The practices, four weeks at three times a week, consist of no-contact drills that follow a session of warm-up exercises and prayer.

“We always start with a prayer and end with another one,” Moore said. “Usually the coaches will lead the prayer, but we love it when one of the boys wants to do it.”

Recently, 11-year-old Landon Spicer led the prayer, thanking God for keeping everyone safe and making sure that everyone works hard, something that Moore said Landon always does.

“This was the first time this year that I wanted to do the prayer,” Landon said, “but I did it once last year too. I love the workouts, especially learning how to tackle. I hope to get to play defense this year.”

Moore and Rogers both enjoy the last part of practice each day.

“Sometimes we let them play about 30 minutes of two-hand tag games, but my favorite is when the coaches pull against all of the boys in a tug-of-war,” Rogers said. “The boys have won a few times, and you can imagine how they celebrated when they did.”

Erin Rogers, Martin Rogers’ wife, is the linchpin of the Back Yard Boys. She handles the things that keep the group going, according to Moore — publicity, waivers and concession sales.

“They handle the field and I handle everything else,” she said. “I’m just the person in the background. We want to continue to grow, welcome more kids and meet new faces.”

She sells small concessions but grills hot dogs and hamburgers for the players and parents for a donation. “If someone doesn’t have the money to pay, they still get something good to eat,” she said.

With a celebration on Thursday, the camp came to an end, just ahead of the beginning of YFL practice a week later.

Players and coaches began the practice as usual and then transitioned to more fun activities, including a bounce house.

Two players received awards. Caleb Kimbrough was honored as most dedicated, and Ranger “Pickle” Turner was named most improved.

Rogers and Moore are exploring nonprofit status for the Back Yard Boys.

“I love to see the boys’ improvement, but more importantly this is about getting them off the couch and building their character,” Rogers said. “We’ll be working to make the camp even better next year.”

Rogers can be reached at no1tonto2001@yahoo.com

Walls are falling: Demolition begins on former bank at…