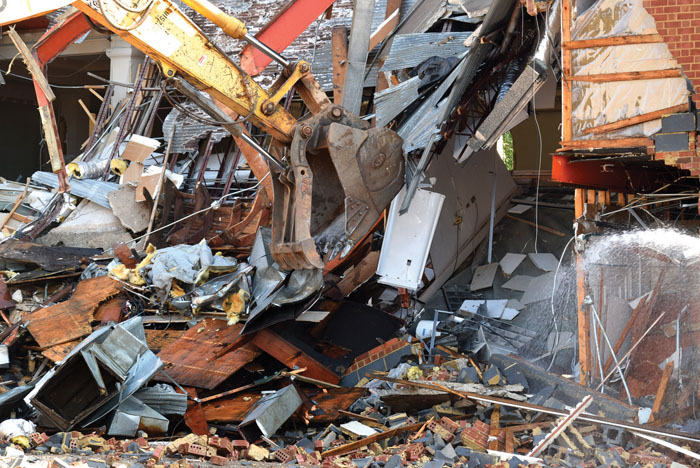 Crews from D.H. Griffin and Crouch movers are at the former First Bank building on West Innes Street tearing it down today.

The drive-through was removed and its roof sat on a Crouch flat-bed tractor trailer in the large parking lot in front of Rowan Public Library. A man from Crouch said the columns holding up the drive-through were all brick, inside and out.

A representative of D.H. Griffin said tearing the building down will take time, though the large claw of the track hoe was taking huge chunks down fast around 9:30 a.m.

The demolition has begun

Updated look at the former First One Bank. 2pm

Griffin always recycles as much as possible, he said, so they will tear a portion of the building down, sort the materials and separate them before moving on. He said a small pile was a lot easier to go through than a huge pile of rubble.

The claw pulled down steel beams, a large air conditioning unit and floors as if they were made of tin foil and paper. A stream of water helped to keep the dust down. Other equipment moved about to clean things up as demolition progressed.

Only a few people gathered to watch the process this morning. The Griffin representative said the company will also take out the asphalt of the parking lot. Work will continue, he estimated, for a couple of weeks. Deirdre Parker Smith/Salisbury Post The demolition has begun on the former First Bank Building on West Innes Street. Crews have started at the back of the building, but if you look through the rubble, you can see the view out front.