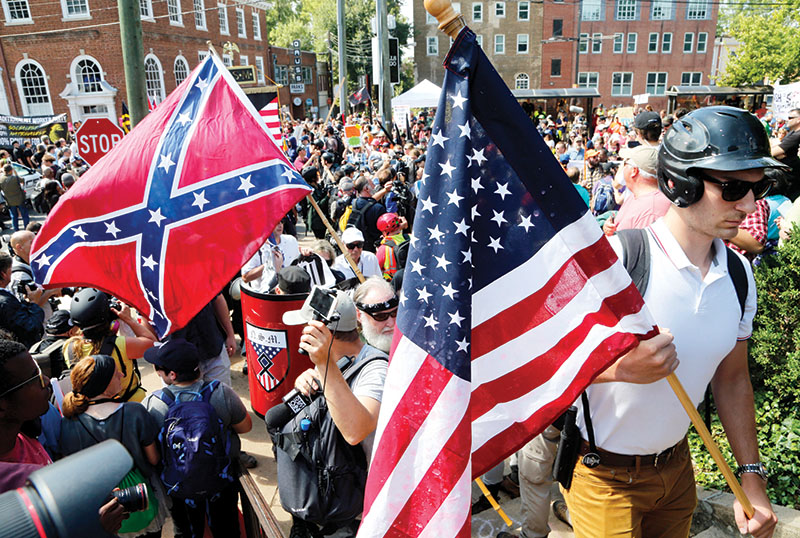 The shocking white nationalism on display last weekend in Charlottesville, Virginia, is a relapse of an old cancer in America. We’ve seen the swastikas and “Sieg Heil” salutes before, but rarely on such a scale, and rarely ending in such a horrifying act of domestic terrorism, which left one woman dead and 19 others injured.

It is especially disturbing that the fascist fringe is utterly emboldened, planting seeds online with disaffected youth that will grow for a generation.

President Donald Trump plays an outsized role in the surge. His campaign and election were seen by the racist fringe as a trumpet blast, and his halfhearted rebukes have fueled, rather than doused, the flames again and again.

The Southern Poverty Law Center tracked a dramatic rise in hate groups, operating on and offline, from 2015 to 2016, as they coalesced around Trump like no other presidential candidate in decades.

… The counter-protests in Charlottesville, and in Seattle on Sunday, succeed when they overwhelm and mock the hateful and brittle ideology of white nationalism. They fail when they lapse into violence. In physical conflict between fascists and anti-hate protesters, the goons in the Hitler haircuts win. Peace protesters throwing punches is easy fodder for the far right looking for hypocrisy on the left.

…As unsettling as the images of 21st-century Nazis are, Seattle and other cities must accommodate protests and parades across the political spectrum, because the First Amendment is the bedrock of our democracy.

… The fringe right is still pumped up from Charlottesville. They pledge to show up again in their white polo shirts. When the anti-hate majority of America responds, don’t give the fascists what they want. Protest hate with peace