The fascinating world of orb-spinning spiders 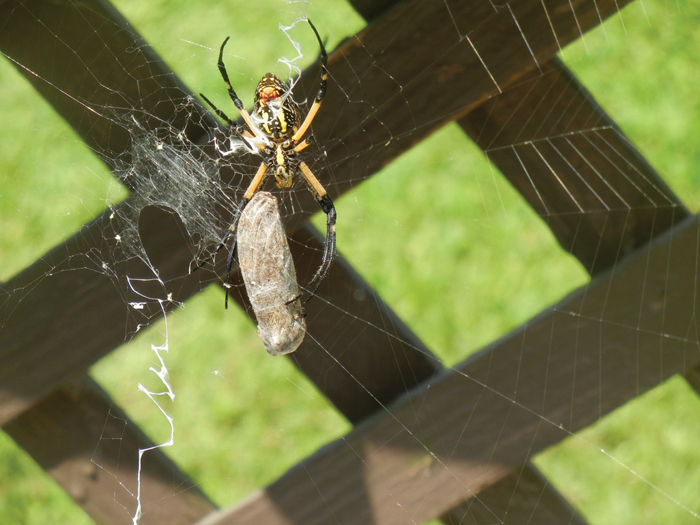 Brenda Zimmerman/For the Salisbury Post The orb spinner wraps up her grasshopper prey neatly in silk.

When I was a child in middle Tennessee, I had a very petite Granny who shared her love of God’s creation with me. She pointed out flowers, butterflies and birds. She taught me to be respectful but not afraid of snakes, spiders or lizards.

One of my favorite memories was looking out the window at a large, symmetrical spider web that stretched from a boxwood to the window frame. In the center was a long zig-zag pattern. The “sewing spider,” as she called it, was a beautiful jewel of black and bright yellow. She assured me it was a good spider.

I have had as many as 17 of these good spiders take up residence on my deck in and among my potted plants in a season. The more I watch them, the more interesting they have become. One cool morning I walked onto the deck to see 10-12 perfectly spun orb webs hanging with dew. They looked like strands of clear glass seed beads.

This ordinary black and yellow orb spinner (Argiope Aurantia, garden spider, writing spider) can be found in southern Canada, all 48 contiguous United States and far down into South America. I think my Granny called it a sewing spider because she was envious of the nice even zig-zag that her treadle sewing machine could not create.

The zig-zag formation found in the female’s web is a stabilimenta. Entomologists are not positive of the intent. It may strengthen the web by making a stronger hub; divert birds from flying into it; be a lure for prey or an attention-getter for a prospective mate.

The web is often made of over 20 central spokes and can stretch up to 4 feet across. If the web is sticky enough to catch prey, just how does she skate around without getting tangled up while spinning? The spokes are dry, the connecting spiral threads are sticky. Not once have I ever seen the “writing” of the zig-zag.

By contrast, the male’s web is only 10-12 inches and has a straight line down the center instead of the zig-zag. They have as many spokes as the larger female web but very few of the spiraling connections resulting in a band of about one inch in width.

As soon as something hits the female’s web and begins to struggle, she rushes over and grabs the meal in her front four legs. Hanging upside down, the back feet are used like a Cirque du Soleil character rolling a ball with their feet. With incredible swiftness the creature is wrapped in bright white silk.

By rapidly flexing her legs at the middle joint, a female can pump the web from the center, causing vibrations of the entire web. This frenzied movement may be a response to perceived danger or it  could be a response to an approaching mate. Brenda Zimmerman/For the Salisbury Post The orb spider has done a careful job spinning silk to protect the eggs contained in the egg sack. Note the yellow silk stretching from the case.

The female is more decorative and elaborate than the male. I assume that like snowflakes, the intricate patterns of black and yellow are unique to each spider. The long legs have two distinct joints. When seen centered on the web, the visual is that there are only four legs instead of eight since she lays them very close together in pairs forming an “X” over the zig-zag mark. Leg span can be 3-plus inches.

The male has about an inch to inch and half leg span. His body appears to be no wider than the width of his two legs laying side by side. The lifespan of the male is shorter than the female. His goal is to find a female for mating.

The egg case is a firm, papery ball about the size of a large marble. The colors are at first a camouflage of reds, browns and tans that the sunlight fades to a warm gray. Females can lay up to three sacs in a season.

One egg case was formed against the electric meter. When it separated from the metal, the flat side was totally exposed. This cut-away view revealed a bright yellow cluster of tiny “beads” nested in an ultra-fine golden silk.

The biggest excitement has been watching two females build the egg cases and lay eggs. From the initial net that is spun to protect the case to the actual laying of eggs and finishing the case, the process lasted about seven hours. I had noticed one of the females was unusually round. About sundown she began creating a series of strands between the vertical bars of a plant stand. Working in circles she built a small silk cap. The cap was filled with a white cushion of silk. When it was approximately a half-inch long, she began laying a golden brown silk on top of the white.

She lifted her abdomen up to the silk and started laying the eggs. Starting as a tiny bright bead of yellow liquid, the final round glob was about the size of a large English pea. That process took about 20 minutes. This can contain from 400-1000 eggs.

The spider clutched the entire case and hung underneath it for several minutes. Every once in a while, she would lower herself,  then she would punch hard against the eggs and hold on again. It seemed she was letting the cluster of eggs air dry to be sure they would stay attached to the silk bed. Once she was satisfied, she began working on the case again.

I could see the silk flowing from the two abdominal spinnerets. There was a rhythm as she went around and around. Hanging by six front legs, she attached a small thread to the upper section of the egg case, pulled it over the eggs and then used a back leg to cut the silk off. She repeated the process over and over, completely covering the eggs with white silk. It looked like knitting needles as she went from left to right.

As she finished the exterior of the egg case, more net like threads were spun all around the site. The visual looks a bit like the complex crisscross of laser lights used in security systems. The strong silk secures the egg sac against the wind and elements. Soon, the females disappeared.

In laboratories this is one of many species of spiders and scorpions whose venoms are being studied for medicinal uses. Most of the venoms are harmless to humans.

The jumble of chemicals is being studied for many potential uses: slowing the progression of Alzheimer’s Disease, slowing the development of some cancer cells, and a promising medication for hemophilia.

The research takes me back to a time when everything was a learning experience. And instead of all the search engines I used to gather this information, the search engine then was a tiny apple-faced woman with inquisitive eyes who encouraged me to be curious and investigate and enjoy the world around me.

‘A ‘Bury Home Companion’ to raise funds for symphony