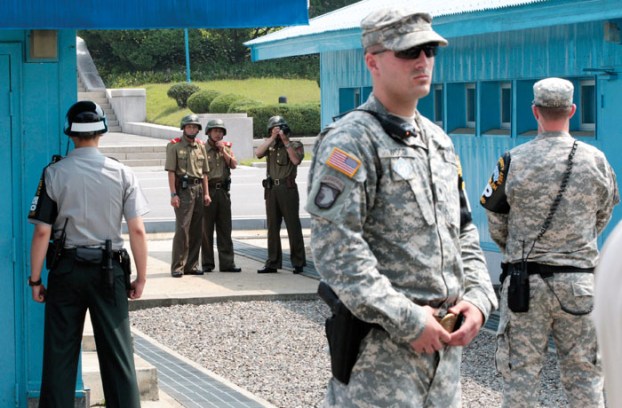 In this July 27, 2014, file photo, North Korean army soldiers watch the south side while South Korean, left, and U.S. Army soldiers stand guard at the truce villages of Panmunjom in Paju, South Korea. A nuclear war between North Korea and the United States is not imminent, analysts said, but the inflammatory rhetoric on both sides is increasing the risk. AP Photo/Ahn Young-joon, File

SALISBURY — Local veterans who served during the Korean War or later on the peninsula say threats exchanged between U.S. and North Korea seem like bluster — but war is possible.

Relations between North Korea and the United States have been hostile for decades, but in recent history the country has ratcheted up the pace of its nuclear and missile tests.

More recently, President Donald Trump said North Korea would feel “fire and fury like the world has never seen” if the country makes any more threats. North Korean leader Kim Jong-un responded by announcing that his country will draw up plans to fire missiles near the U.S. territory of Guam.

Saying his previous comment wasn’t tough enough, Trump on Thursday said North Korea “better get their act together, or they are going to be in trouble like few nations have ever been in trouble.”

Some local veterans said Thursday they don’t believe war is likely to come from the back-and-forth.

James Allen Harris joined the Air Force and headed to the Korean Peninsula at age 18. Now 85, Harris said the recent exchanges seem to be tough talk.

James Dooley, who entered navigation school just before the Korean War ended, said it seems as if Trump and Kim are trying to “out-bluster” each other.

Josh Wagner, who was stationed in the demilitarized zone in the early 2000s, said he hopes it’s all talk.

“What we want to do is avoid their pre-emptive launch because once that starts, we could go down a very scary and dangerous path,” Wagner said. “The goal should be de-escalation at all costs.”

Speaking about North Korean leader Kim, one local Korean War veteran who did not want to be identified said, “That little squirt over there should be thrown on his little butt.”

Whether it’s war or not, local veteran Milton Iossi said America’s leaders need to be “very careful” about the way they speak about and interact with North Korea. Iossi, 86, served as an Army engineer during the Korean War and later worked as a diplomat.

“At this point, they’re threatening to plan an attack on Guam. What does one do if you have forces in that part of the world?” Iossi asked. “There are no easy answers.”

South Korea’s capital city — Seoul — has millions of people and sits near the North Korean border. Iossi said there’s an unknown amount of artillery aimed at Seoul and large numbers of North Korean troops across the border. He said North Korea could fire its artillery at Seoul if war breaks out.

“So we’re tiptoeing into a situation where there are no easy answers,” he said.

More than one veteran who spoke to the Salisbury Post said the U.S. could “stumble” into a war against North Korea.

For soldiers serving in the demilitarized zone, Wagner said, the recent threats may not seem like inching toward war.

“Being there, you kind of get numb to it, and if you talk to the folks there now, I suspect they may feel similar,” he said. “You know there is a threat, but you don’t think about it every day.”

When Wagner served in the demilitarized zone for 13 months between 2002 and 2003, he provided security during peace talks in addition to other duties. Wagner said he worked out of the northernmost observation post.

“That’s not going to convince someone that they’re wrong,” he said.