Putin’s gamble is not paying off 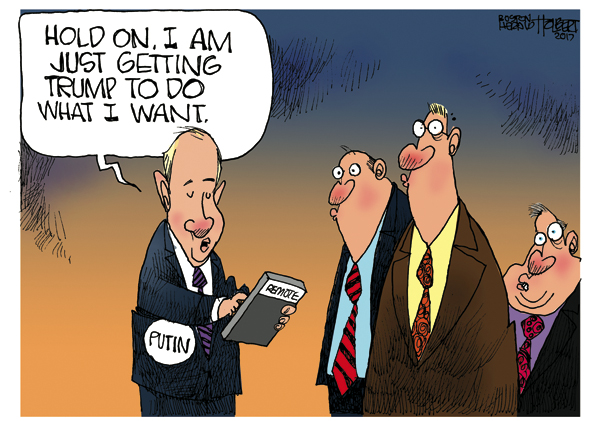 From a column by Gene Lyons, a columnist for the Arkansas Times:

A good title for the entire Trump-Putin saga might be “The Naive and Sentimental Dictator.” Assuming, that is, that it all plays out as farce — certainly the direction events are trending in the White House.

What did Vladimir Putin think he was getting? Is it possible that he mistook an egotistical buffoon like Donald J. Trump for an apprentice strongman? If so, he badly misunderstands America. It’s not simply Russia with better plumbing. Granted, Trump himself lacks the self-discipline for autocracy. But he also lacks the servile population.

Putin is known to regard Western ideals of liberty, freedom and democracy as sentimental illusions. Trump disdains all laws that impede him. But if Congress accomplished nothing else by imposing new sanctions against Russian meddling in our politics, it proved that Putin’s best American friend has become the weakest president in living memory.

Not that Trump can’t still do enormous damage. But sentimental illusion or not, he won’t be able to undo the Constitution.

For all his bluster, Trump’s increasingly becoming a figure of fun — almost as laughable as his comic opera mini-me, The Mooch. His falsehoods expire overnight, often due to his own foolish tweets.

Nobody fears Trump, not really. See, he can’t have me thrown into prison for mocking him. Also unlike Putin, he can’t have Sen. Jeff Flake, the Arizona Republican, shot dead in the street for denouncing his own party’s “Faustian bargain” with Trump.

“Silence in the face of an erratic executive branch is an abdication,” Flake writes in Politico, “and those in positions of leadership bear particular responsibility.”

But back to Vladimir Putin. No, we definitely don’t need another Cold War with the Russians. Never did. But it’s the Russian dictator who badly overplayed his hand — possibly why his diplomats are already hinting that mutual accommodation might still be possible.

One theory is that Putin never really imagined that his efforts would bring about a Trump presidency — that his real motive was sowing confusion and Russian-style cynicism about democracy itself. Certainly, Russian operatives’ approach to the amateurish schemers in Trump Tower last June was like something out of a Donald Westlake comic crime caper.

Writing in The New York Times, former CIA chief of station Daniel Hoffmann argues that what looks like incompetent Russian tradecraft indicates a baited mousetrap Donald Trump Jr. clumsily jumped into. An email from an intermediary vowing Russian government support for the Trump candidacy and promising to deliver dirt on Hillary Clinton?

So which is more incompetent, Team Vladimir or Team Trump?

The CIA’s Hoffman thinks he knows: “To me, the clearest evidence that this was a Russian influence operation is the trail of bread crumbs the Kremlin seemed to have deliberately left leading from Trump Tower to the Kremlin. This operation was meant to be discovered.”

But why? The commonest use of kompromat, as the Russians call incriminating evidence, is blackmail.

Too late now. Russians commonly say that Putin’s a cunning plotter, but a strategic dope. If he wanted Trump in his pocket, looks like he’s got him.

Colin Campbell: More than meets the eye to some…