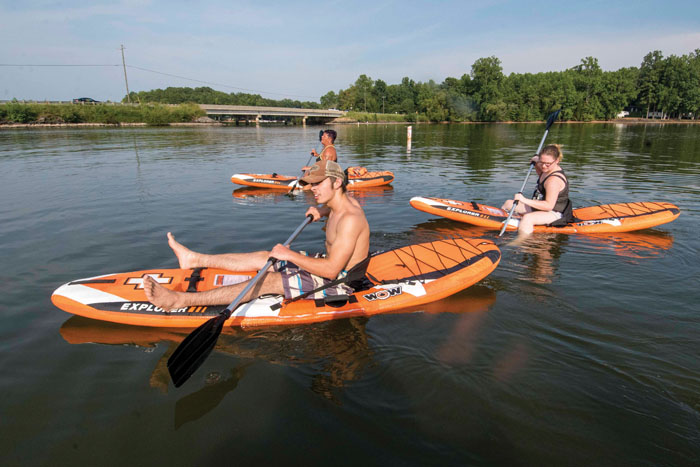 Lifelong lake resident or newly arrived retired couple, lake homeowner or visitor from a neighboring city — it seems everyone can find something to do on a Friday evening at High Rock Lake.

“I love the scenery. It’s a break from the monotony of everyday life,” said M.J. Jarvis, a Salisbury resident who made a date-night trip to Lakeview Family Restaurant on a recent Friday evening with his wife, Mahaley. “It’s always festive, but it’s unusually quiet right now. But I’ll take a peaceful scene too.”

Kayakers Dylan Furr, Alexee Allison and Shannon Salois also took to the lake for a refuge from life’s tedium. Furr and Salois work at Tamarac Marina on the lake and were enjoying their day off by “wasting time and having fun” on the water, said Salois.

For some lake-goers, a trip to the lake is a weekly ritual. Others venture out only a few times a year. But it seems folks of all different walks of life are drawn to High Rock for its simultaneous serenity and joviality.

The Walters family — Roger, Amanda and their son, Rodney — make the trip from Landis to the lake every weekend. Beginning on Friday afternoon, they bring their boat, a 1985 Ebbtide, and enjoy time together on the water.

“We’re here every Friday, Saturday and Sunday,” said Rodney. “I like to play, be around family, go to Goat Island, fish. It’s just peaceful.”

A student at Corriher-Lipe Middle School, Rodney said his family prefers High Rock to Lake Norman because in general, the boats on the water are smaller. The Walters family’s Ebbtide is a new addition, the fourth boat the family has owned, said Roger Walters.

“Rodney has grown up on High Rock,” said his mom. “It’s a nice place. Everybody is friendly and helpful.”

Lake-goers not only enjoy time on the water but also the restaurants — Lakeview Family Restaurant and After Dock Restaurant at Tamarac Marina.

“Every Friday, we have to eat here. I get the grilled shrimp every time,” said Diane Johnson, who goes out to eat each week with a group of friends.

Myron and Sonia George, who moved to Emerald Bay a couple of weeks ago, also came to enjoy a meal at Tamarac. They were enjoying time with Sonia’s parents. Living on the lake has proven to be different from the fast-paced, traffic-heavy and noisy life they knew in Indian Trail, which is near Matthews and outside Charlotte, they said.

“I wash dishes, and look out at the lake. It’s just so peaceful,” said Sonia George. “You can’t hear any traffic — no cars, not even any airplanes. It was a dream — just one of those things you don’t ever think is going to happen.”

The Georges also enjoy the convenient location of the lake, which is close to Interstate 85.

“We have five kids and an eighth grandchild coming, and we have to travel to see them, so it’s nice to have the interstate nearby,” said Sonia.

As the hot sun beat down, the calm surface of the lake reflected the surrounding trees. The images were disturbed only by the occasional boat or a family of ducks. Another day on the lake was coming to a close, but expectations for the coming weekend hung in the air.

“Come to the lake,” said M.J. Jarvis. “Everybody’s happy, and you just pick up the spirit of no worries. Have fun for a change.”

Spencer’s doll and toy museum gets a new name