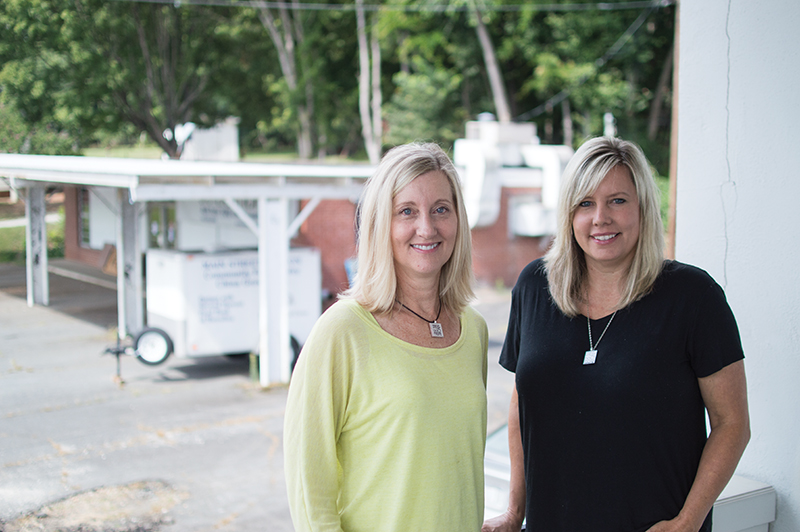 Josh Bergeron / Salisbury Post - Anne Corriher, left, and Hope Oliphant, right, pose for a picture in front of a former laundromat that Main Street Mission in China Grove plans to renovate and expand. Corriher and Oliphant say a groundbreaking is set to occur in September.

CHINA GROVE — A goal that was difficult to imagine just one year ago is inching closer to becoming reality for Main Street Mission.

In roughly one month, the China Grove nonprofit organization plans to hold a groundbreaking for a construction project that would renovate a former laundromat and add 1,200 square feet of space. The combined space will become a food pantry, said the organization’s executive director, Anne Corriher, and Hope Oliphant, community outreach coordinator.

More than one year ago, Main Street Mission launched a fundraising campaign that aimed to raise $400,000. Corriher and Oliphant said they planned to hold a groundbreaking after the campaign reached $300,000.

The laundromat is adjacent to Main Street Mission’s current facility and measures about 1,600 square feet. A food pantry, welcome desk, interview stations and storage are planned for the new building.

Logistical considerations are part of the reason for the expansion, Corriher said.

Main Street Mission currently unloads food by lifting individual cases off a larger pallet in the parking lot. In the renovated building, it will have a roll-up door where a delivery could back up to the building and drop off pallets of food.

Second and, Corriher said, more important is that the renovation and expansion will allow Main Street to enhance the quality of its offerings. The current facility — a repurposed house on Main Street — would be devoted to resource classes, support groups and the group’s empowerment initiative, Corriher said.

“We really want to use our current facility to continue to create a safe place for people to reach out of their crisis of the day and see what their future could look like,” she said.

If all goes according to plan, the new building could open next spring, Corriher and Oliphant said.

The renovation could pave the way for a new offering, too.

Oliphant said Main Street Mission plans to launch a food cooperative that would allow those who have graduated from its program and want to be more independent to work for the cooperative and use a pool of member money to purchase large quantities of food.

One of the classes is called “Getting Ahead.” It’s aimed at those living in financial insecurity.

Another class is “Bridges Out of Poverty” that trains volunteers to deal with people who live in financial insecurity.

Corriher and Oliphant said Main Street Mission also serves as a location where volunteers and participants alike can exchange knowledge. That exchange could prevent low-income people from falling victim to scams or unscrupulous businesses. An example, Oliphant said, might include talking about which car mechanics do good work.

For more information about the nonprofit group, visit mainstmission.org or call 704-855-2909.