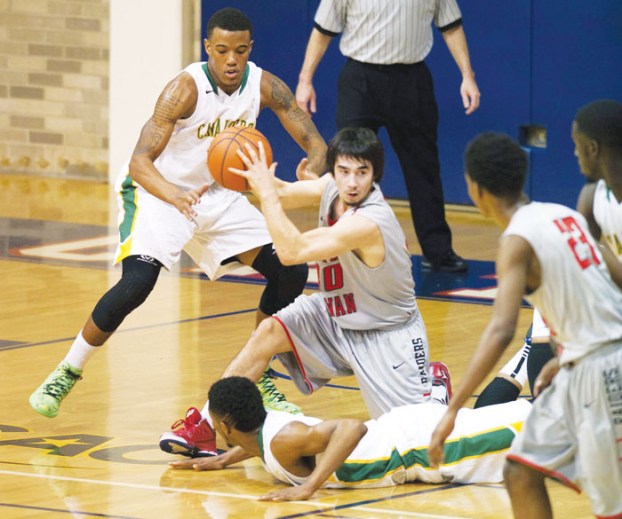 Shawn Spry plays for South Rowan in the Sam Moir Christmas Classic in 2013. He was an avid basketball player who once dreamed of playing in the NBA. Jon C. Lakey/Salisbury Post file photo

Family, friends remember murder victim Shawn Spry as someone who ‘was always smiling’

But family and friends say he was more than a basketball phenom. He was a loyal, caring friend.

Salisbury police say someone walking by spotted Spry’s body on the ground, the victim of an apparent gunshot wound. According to police, Spry’s mother, Tomasa Furr, his sister and his girlfriend, Hayley Head, reported him missing about 8 a.m. Monday.

A few hours later, the police called Head and asked her to identify his body.

Spry’s older brother Nestor Sanchez said the two of them were close. There was a 15-year age gap between the two, and Sanchez was always being mistaken for Spry’s father.

Spry’s father died when he was just a baby. Sanchez was beginning high school when his brother was born, so he naturally assumed the role of father figure, he said.

“I bought him his first cellphone,” Sanchez recalled Wednesday.

Shawn was in the sixth grade and was excited to have a cellphone.

Sanchez said he taught his brother the fundamentals of basketball, but it was South Rowan Coach John Davis who really taught him the sport. Sanchez also played for Davis.

“People thought I was his dad because I went to all of his games,” Sanchez said.

Basketball was Spry’s life, and he had aspirations of joining the NBA. But when he didn’t get into the college he wanted, his dream fizzled. But friends say his love of basketball never wavered and, in more recent years, Spry had thoughts of playing in a European league.

Spry played AAU basketball in the summer, and the family traveled across the state and country to see him play.

“Shawn always had a smile on his face,” Sanchez said.

There were four boys in the family that included Matt and Josh.

“He takes a lot from all of us. From my mom, he’s hard-working and determined. He cares for people, which he got from me, and Josh is really kind. And from Matt, he was free-willed,” Sanchez said.

Sanchez, who is a Charlotte business owner, was at work when his mother left him a voice mail and asked him to call her. He knew something was wrong because she wouldn’t tell him much other than to meet her at the Salisbury Police Department.

“She wouldn’t tell me. My other brother Josh called and told me what happened,” Sanchez said.

“I lost it and didn’t believe it was true. I’ve never lost anybody this close to me before. I haven’t been able to sleep in the last few days,” he said.

He’s sad, but at the same time surprised by the outpouring of love and support from friends and strangers alike.

Sanchez said his family doesn’t have many relatives in North Carolina, but he’s felt the love from people in the community.

He said police officers have said they have good leads in the case, which gives their mother some comfort.

“At the end of the day, the good Lord has a plan for us,” Sanchez said.

He said being surrounded by siblings, nieces and nephews has helped take his mind off things.

“(Shawn) had a lot to give to the world but didn’t get to do it. He wanted to play basketball professionally. He wanted to someday have a family,” Sanchez said.

Dionte Tillman had known Spry since middle school, and they became close friends in 10th grade.

“He was the first person who walked up to me and introduced himself. It was second semester of 1oth grade,” Tillman recalled.

Tillman played baseball while his friend loved basketball. He regularly attended Spry’s games to show support. Spry would return the favor by being a big supporter of Tillman’s music. Tillman, his brother and cousin are musicians.

“He would be the first to share about our music,” he said. “He was a really good guy and a genuine guy. I loved him like a brother.”

He said before he learned of his friend’s death, Hayley Head called to tell him that Spry was missing. Spry had not been seen by Head since the night before. She spoke with him and went to bed, Tillman said.

When it was confirmed that Spry was dead, Tillman said he was “hoping it wasn’t him.”

“I was pretty devastated,” Tillman said.

Tillman and Head, along with twins Jade and Casey Newton, were sitting around talking about what should happen next.

Tillman said Head shared with them how she has her 13-year-old brother to take care of and other expenses. One of the twins suggested they create a GoFundMe page.

Tillman set to work the same night setting up the page, establishing a $5,000 goal, which has since been exceeded.

“We reached the goal in 32 hours,” Tillman said.

Any extra money will help Head for the time being continue to care for her brother, who lived with her and Spry.

“You could come to him for anything. He was very open-minded. He wouldn’t judge you. He was truthful, blunt. He was very caring,” Tillman said.

He said he last spoke with Spry at 10 the night before he was killed.

Devin Sells and Spry became friends in seventh grade. This year, they would have been friends for 10 years.

The two friends spent vacations together with each other’s families.

“He was very loyal and always there when you needed him. He was always smiling.”

Sells found out about his friend’s death from Tillman.

“I just broke down. I left work immediately and met with his family at the hospital,” he said.

“I still can’t wrap my head around it. I feel like he should be here right now,” Sells said.

He said the one thing he wants to make clear is that his friend was not affiliated with a gang.

Spry’s legacy, he said, should be that he was someone who always wanted to do better and who never gave up.

Carolina Pickers Festival: One man’s junk is another man’s treasure

SALISBURY — Well, what is a picker anyway? If you have watched the TV program “American Pickers,” then you have... read more