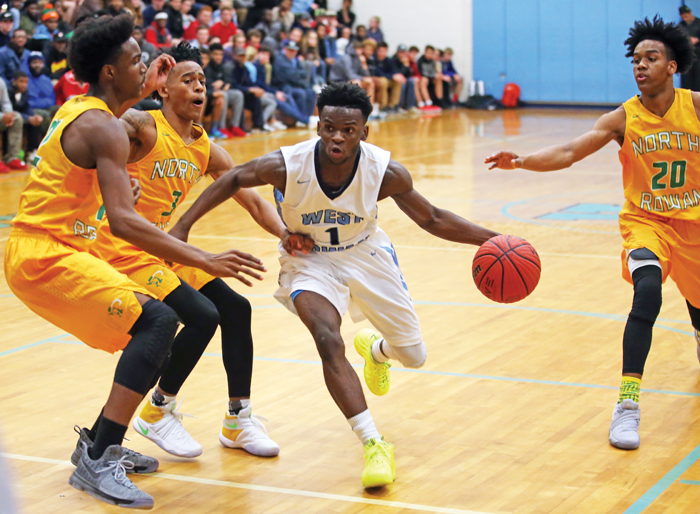 Herron-Cuthbertson transferred from Carson to North Rowan for his senior season. While he averaged only six points per game for the Cavaliers, there was a lot of growth in ways that the scorebook didn’t necessarily show.

“At Carson, I was looking to create openings for myself and I was scoring more points,” Herron-Cuthbertson said. “At North, Coach (Andrew) Mitchell was hard on me, but he also taught me a lot. I learned that my main job was to help out our scorers — Joe Scott and Henderson Lentz. They were both first team all-county. I accepted the role of helping to set them up.”

Despite his modest offensive numbers as a senior, Herron-Cuthbertson is getting a chance to play college basketball at Division II Newberry, one of Catawba’s opponents in the South Atlantic Conference.

That’s not a shock. He was talented enough to see major minutes for the Carson varsity when he was a freshman, he produced seven double-figure games for the Cougars as a junior, and he’s stood out for for the local travel program, Team F.L.Y., in high-powered tournaments against strong competition.

“We had some big moments with Team F.L.Y. and won tournaments against teams that didn’t think we had any chance to beat them,” Herron-Cuthbertson said.

Herron-Cuthbertson enhanced his reputation as a skilled guard at a series of elite camps and showcases, holding his own against bigger names.  Newberry head coach Dave Davis really likes his potential going forward, and Newberry assistant coach Jay Reid loves him.

“Malon can play, he can really play, there’s never been any doubt about that,” North coach Andrew Mitchell said. “I wish we’d had him for more than one year, but we asked him to make adjustments to a new system as a senior and he came a long way. He works hard, he can score, he can handle the ball, and he can defend. He’s a fundamentally sound kid. His dad (Dadrian Cuthbertson) has trained him well for a long time, and Carson did a good job with him.”

Cuthbertson is a streaky 3-point shooter and swished flurries from long range against Davie County, Mooresville and Mount Pleasant as a junior and against West Rowan, East Davidson and Lexington as a senior He’s also a crafty ball handler. He can change pace with nice deception and he can switch directions in a blink. He’s not an easy guy for a defender to stay in front of, and he can break down a defense.

Being able to make 3-pointers is paramount as far as earning playing time in Newberry’s free-wheeling system. Newberry ranked fourth in Division II in scoring last season (93.3 points per game) and launched more 3-pointers than anyone in D-II, putting up 38 3-point attempts per game. Newberry shot 37 percent from long range and made 14 3-pointers per game.

“Newberry’s style is a perfect fit for Malon,” Mitchell said. “They play a lot of people a lot of minutes. They play at a very fast pace, and that’s Malon’s game. He has college speed and he has no fear. He believes he can compete with anyone out there. That’s important.”

Newberry plays a pressing, trapping, attacking defense and ranked second in Division II in 2016-17 with 23 turnovers forced per game. Again, that’s a a perfect fit for Herron-Cuthbertson. At 5-foot-10 and slightly built, he’d struggle to match up physically with some of the tall, muscular guards in the South Atlantic Conference, but he’s an ideal defender in a swarming, full-court scenario.

“Quick hands, quick feet, and he anticipates very  well,” Mitchell said. “He can apply a lot of pressure on ball handlers and he can create steals.”

Davis said the plan is for Herron-Cuthbertson to redshirt his first season at Newberry. It’s a year he’ll spend in the weight room, adding pounds and strength. After that, he may be ready to contribute to a winning program in one of the nation’s top Division II leagues.

“I know I need to get stronger and I can also get faster,” Herron-Cuthbertson said.

Herron-Cuthbertson is a solid student. He plans to major in mass communications with a minor in theatre. He was in some plays during his years at Carson.

“I never doubted I’d get a chance to play at the next level,” Herron-Cuthbertson said. “Now I’ve got to make the most of the opportunity.”